Volkswagen: Electric car owners can gain over 1,000 miles of free charge if they shop at Tesco 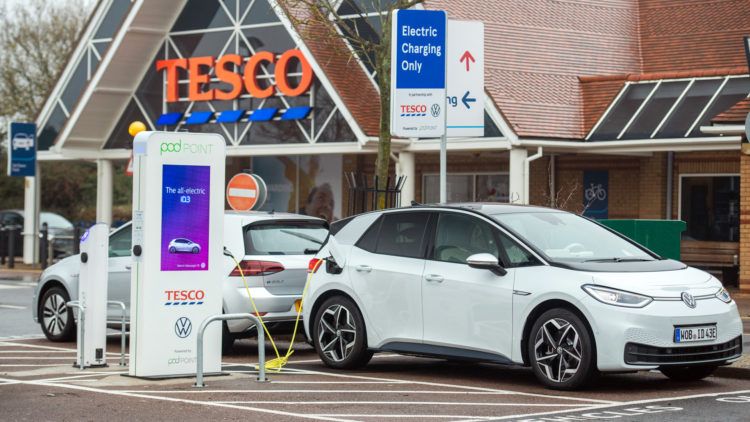 In late 2018, Volkswagen and Tesco, one of the largest UK's supermarkets, teamed up to provide a complimentary EV charging network. A year on, the rollout has seen a lot of success with EV owners; consumers come to do their weekly groceries shop and top up their car for free using a Pod Point charger.

Research conducted by Volkswagen found that the average Brit spends 50 minutes per week in a supermarket. In that time, an EV owner that has a 7kW charger would gain around 22.5 miles of free driving range. Over a whole year, this works out at 1,170 miles – that's the equivalent of driving from London to Rome.

Tesco is working with Pod Point to install 2,400 charging points across the UK; all the electricity used to charge the cars comes from renewable sources. There are currently 100 Tesco stores across the country that have said chargers installed.

Jason Tarry, Tesco CEO UK & ROI, added: “We’re now well on our way to achieving our ambition of installing more than 2,400 EV charging bays across 600 Tesco stores. Providing customers with charging points offers them a sustainable choice and giving them the opportunity to charge their car for free while they shop is another little help to make their lives easier.” 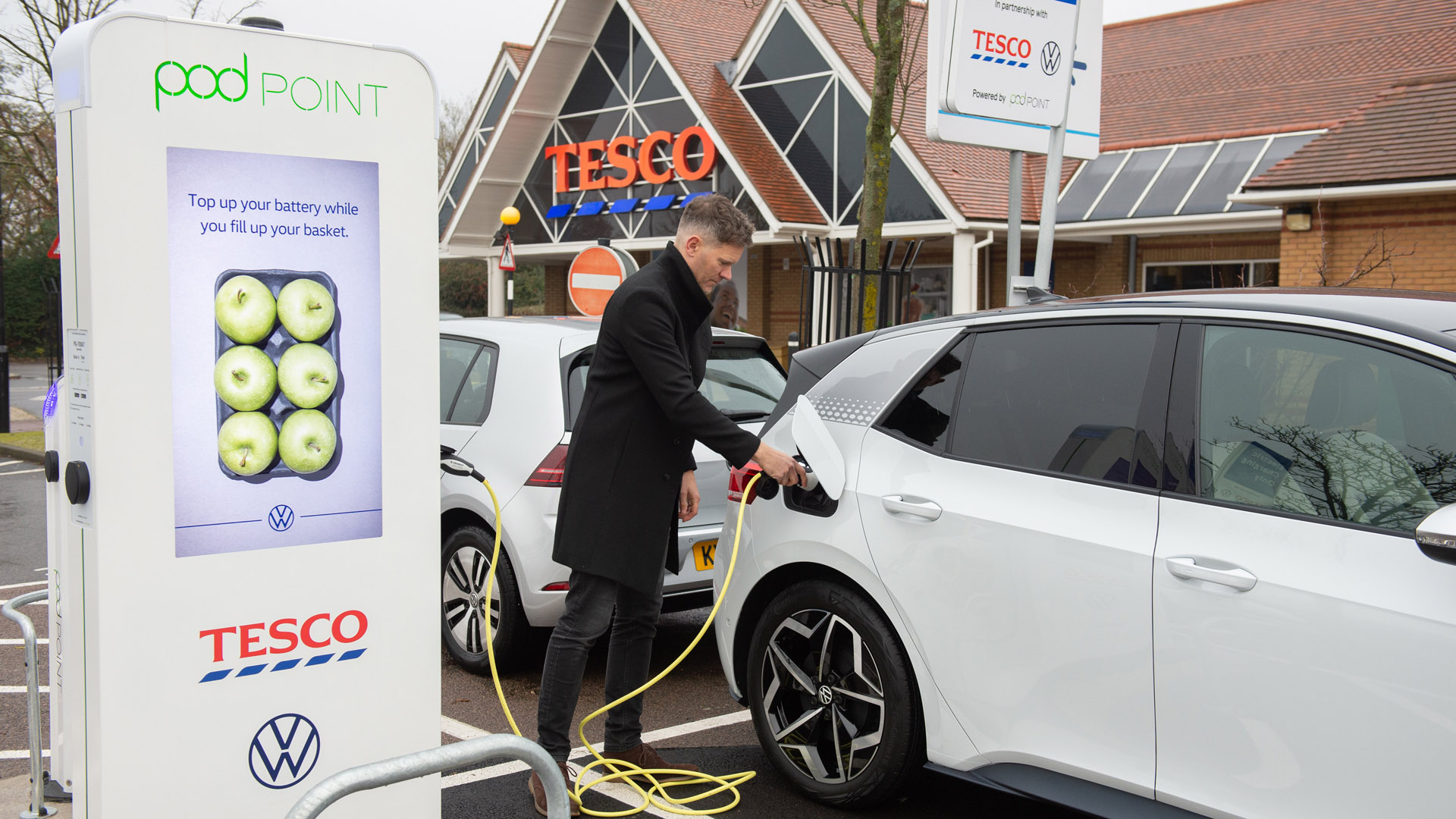 Making its UK debut, VW's new all-electric ID.3 pulled into the Potters Bar store in Hertfordshire. It's the first time the vehicle has been on UK roads since its debut at the Frankfurt Motor Show in September. The hatchback is set to have a range of up to 340 miles and is Volkswagen’s first vehicle that will be built on the manufacturer's MEB platform. Better still, the production of the vehicle is entirely carbon-neutral.

Geraldine Ingham, Head of Marketing at Volkswagen UK, said: “Volkswagen literally means the people’s car, and with the ID.3 we are making electric car ownership more accessible. This fantastic partnership with Tesco and Pod Point makes choosing an electric car even more attractive, allowing people to charge for free, all while going about their daily business.”

Ingham adds, “And the best bit is that this is not just for Volkswagens – the chargers are designed for any electric car owner to take advantage of. We are really pleased to help break down any remaining barriers to opting for an electric car.” 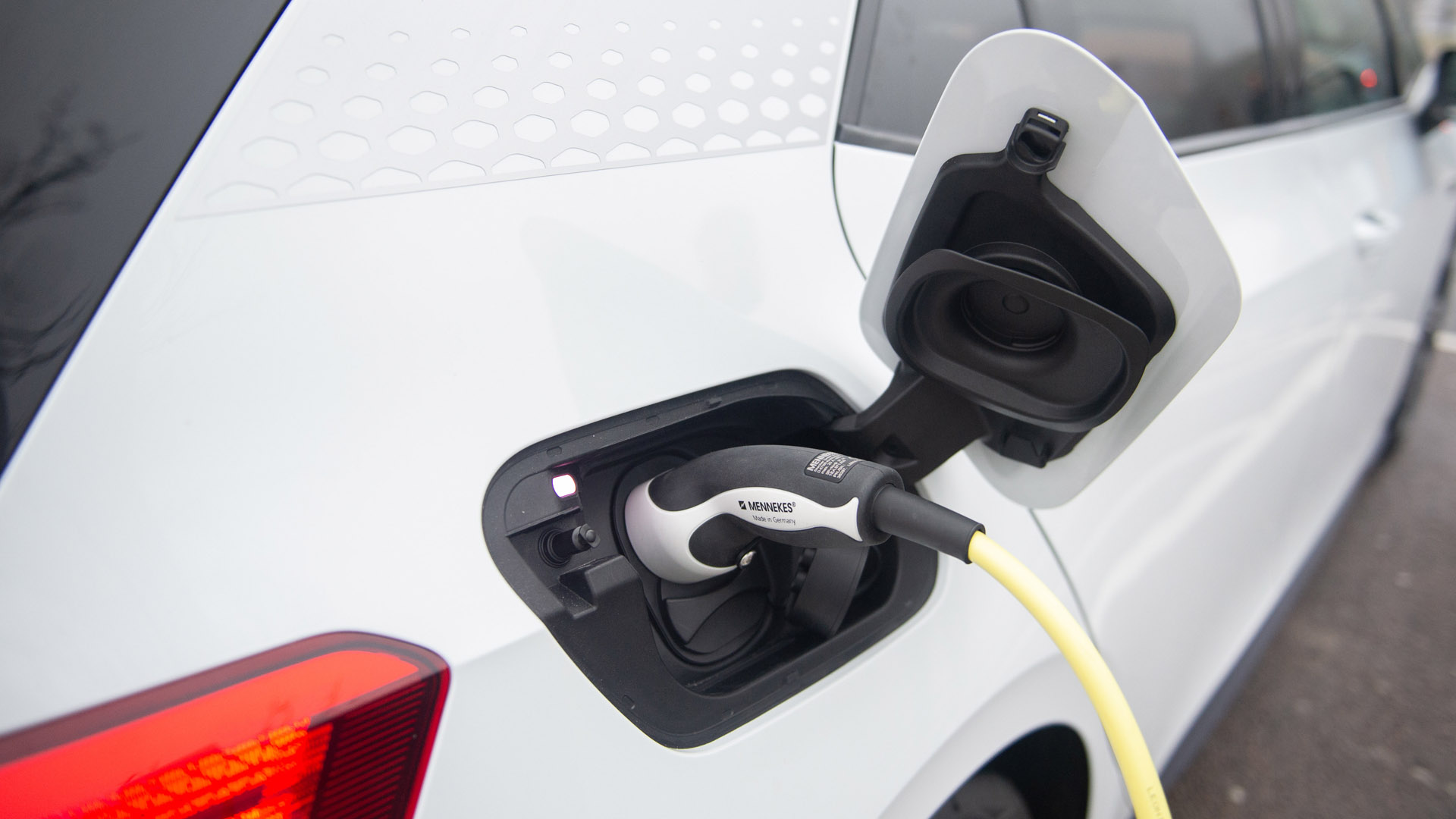 Pod Point, a company that provides charging points for homes, workplaces and commercial organisations revealed that the Tesco-installed charging points were used more than 12,000 in the month of November. According to the company that equates to almost 60,000 kWh of energy – it equates to around 250,000 miles of driving. Imagine the amount of petrol that would have been burnt in that time period. It's scary to think that a large amount of CO2 emission could have been released into the atmosphere, had it not been for electric vehicles, such as the VW e-Golf.

According to the Society of Motor Manufacturers and Traders, sales for pure electric vehicles are up by 125% this year, and that number is likely to rise by 2020. In a survey carried out by Volkswagen, the company found that 41% of the 2,000 surveyed would consider leasing or owning an EV as their next vehicle. Those aged between 25-34 seem to be even keener towards the idea, as 61% of those surveyed would be likely to choose an EV. 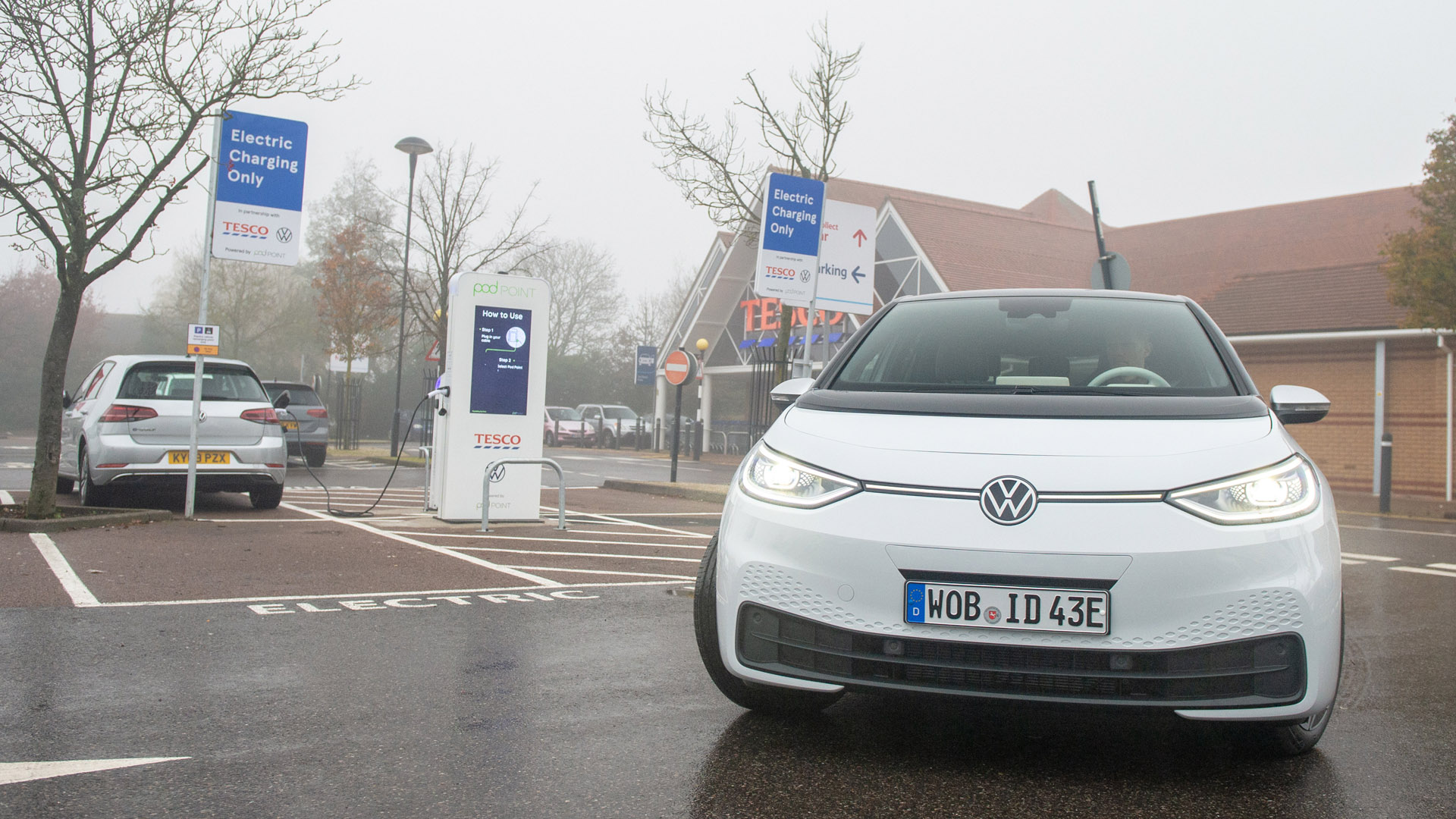 Unsurprisingly, a larger percentage of Brits thought-free charging points were a ‘good thing' – six out of ten adults said ‘they'd be more likely to buy an electric car if they charge for free'. More importantly, however, the survey found that 43% of consumers said they would have to rely on public charging points to top of their batteries. This comes from those who live in flats or shared houses, whereby installing a home charger isn't an option – due to it being the landlord's decision or the fact the property is rented, whereby the tenant who owns an EV wouldn't want to waste his or her money.

Erik Fairbairn, founder and CEO, Pod Point, said: “With the rollout now under way, we are witnessing a pivotal moment for the UK’s rapidly expanding public charging network. Providing smart, easy-to-use chargepoints at this scale is likely to accelerate the transition to electric cars up and down the country. Being able to top up while you shop at so many locations makes it more convenient to go electric than ever before.” 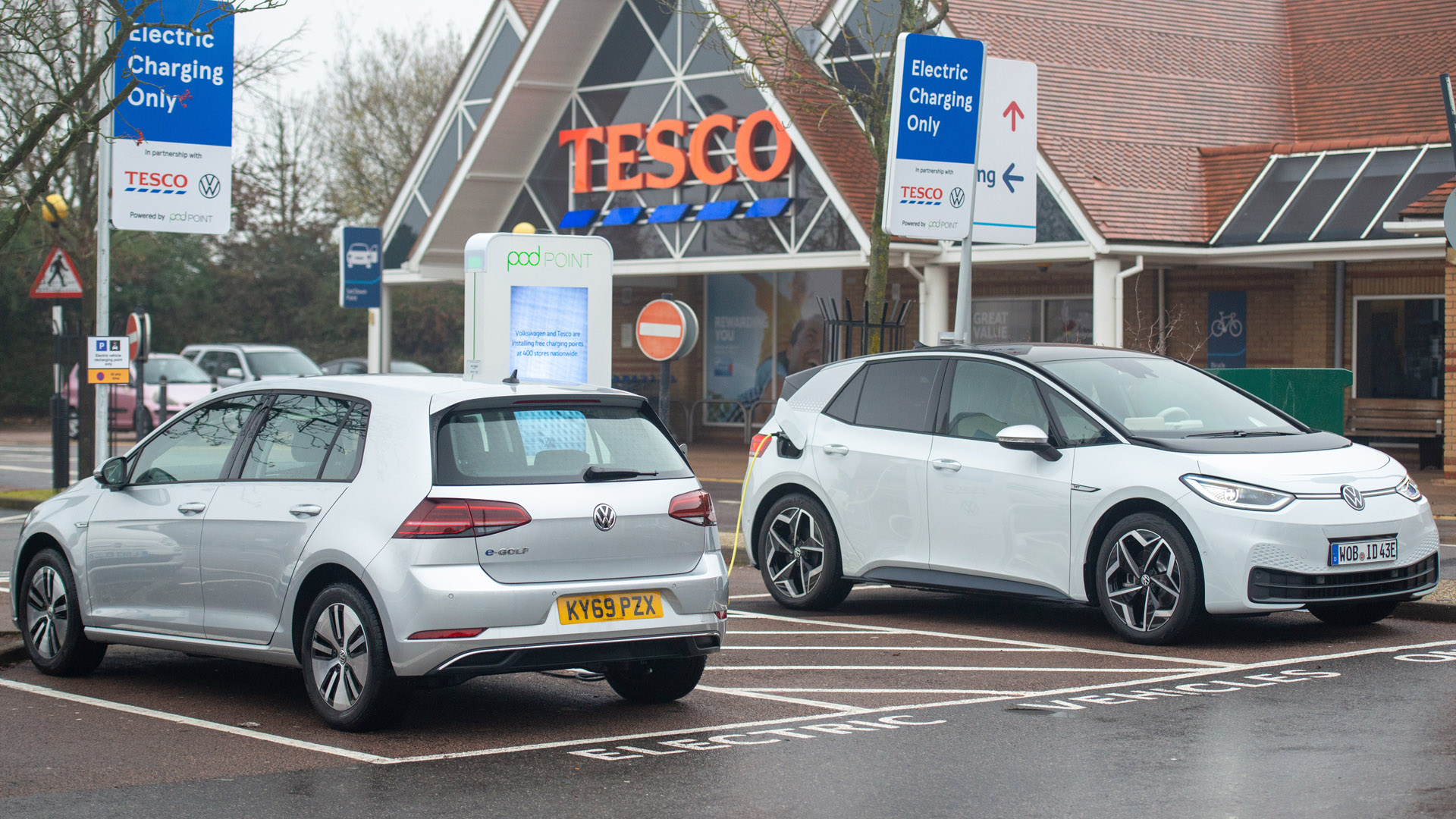 68% of those surveyed believe companies in the UK ‘should be doing more to encourage motorists to make the switch to electric cars.' WhichEV agrees as we see a lot of companies neglecting their responsibilities – if anything, some just do it for marketing rather than for the environment.

Volkswagen also found that a lot of Brits have a misconception when it comes to the running costs of an EV. Most thought it would cost around 9 pence per mile, while VW claims the e-Golf costs around 4 pence per mile. To help understand how many free miles an EV owner could get if they charge at Tesco, VW has created a calculator, which you can use for yourself, below: