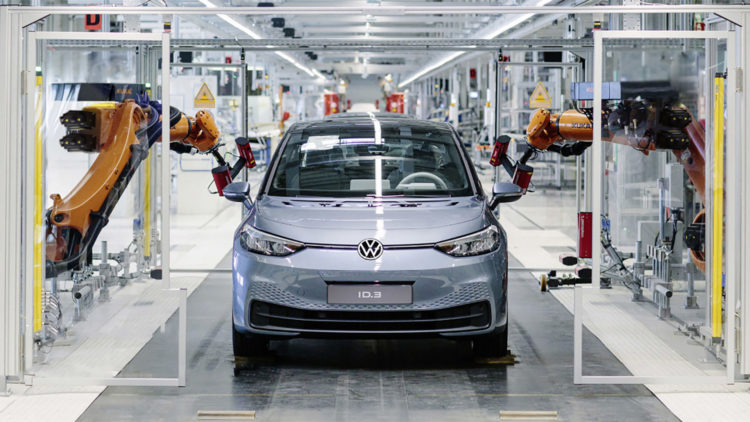 Something that the major manufacturers have known for some time, is that electric cars are simple to build. So simple, that prices could plummet over the next 5-10 years as more companies see themselves as pioneers. Sure, some new knowledge needs to be developed and an understanding of battery technology & electric drive systems is required, but once you have that – putting it all together and maintaining the result is much simpler and quicker than using a petrol or diesel powertrain. Yesterday, we reported that VW will be pushing 75 new EV variants into the market over the next 10 years. Today, WhichEV looks at why EVs are so easy to build – and examines the potential savings for manufacturers and drivers alike.

The biggest initial challenge that will prevent a car manufacturer from lowering prices, is the huge investment needed in plant, IP and infrastructure. VW's reported investment in battery technology is just shy of $48 billion – and that is needed in order to have enough batteries to fit the +1 million EV products they are expecting to ship before the end of 2025. At the same time, the market for fossil-fuel cars is shrinking. So, initially, electric cars will be more expensive, as the big builders transition to new ways of thinking, constructing and marketing.

Another cost (and time delay), is the rethinking of the car itself.

Back in August, VW's Senior Vice President for North America, was at the 2019 CAR Management Seminar in Michigan, where he told people, “We strongly believe that the tipping point is near, and that tipping point will be price equity”.

Many of the first generation of electric vehicles will be ‘existing models that have had the powertrain replaced'. When we spoke with Mercedes about the EQC, they were clear that their first offering was, essentially, the same as the fossil-fuel version, but with a different engine.

Cue the Volkswagen ID.3 with its ground-up re-thinking.

The production process is likely to be highly modular, with motors, batteries and controllers more of a ‘bolt-on, slide-together' assembly process. Many traditional components like cooling systems, fuel storage, pumps, gearbox, differential, exhaust system and complex wiring will similarly not be required.

The ‘new thinking' also includes ideas like using the battery structure itself as a way to add structural rigidity to the car's frame.

“If you focus on an electric platform, all in all it accounts for a 40% reduction against the predecessor electric Golf”, said Diess. “Most of it from cells and the battery system. Around 5-10% comes from dedicating an entire plant to electric vehicles”.

Right now, it looks like an ID.3 will be less than £350 a month on a standard personal lease for 3 years, which is around £150 more than a fossil-fuel version. But then you need to take into account the potential £24 a day saving for driving in London (Congestion Charge + ULEV Charge), as well as the fact that ‘filling up' will be less than £7 and have cool features like a HUD (Heads-Up Display).

VW's Zwickau plant, south of Leipzig in Germany, began production on the ID.3 earlier this month. Now it needs to ramp up production, so that the various economies of scale kick in and VW is able to lower prices.