Although public charging is improving, it’s still far from ideal, as we discussed in our Guide to Public Charging. But it’s even worse if you have a disability that causes mobility issues, and particularly if you’re wheelchair user. We met Roger Warner, who has been in a wheelchair since his teens, at the recently opened Osprey charging hub in Banbury, part of its 150-strong UK rollout. Warner has recently become an advocate for EVs, amd he has plenty to say about what charging networks need to do to make his life easier.

EVs for people with disabilities

The UK has Motability schemes that make it simpler for disabled people to get access to cars. That access helps people who struggle with movement to get help leasing a scooter, car, powered wheelchair, or wheelchair-accessible vehicle. The eligibility criteria are straightforward, and the available help is banded according to need. For a car, payments would typically be around £260 a month – which brings quite a few vehicles into range. 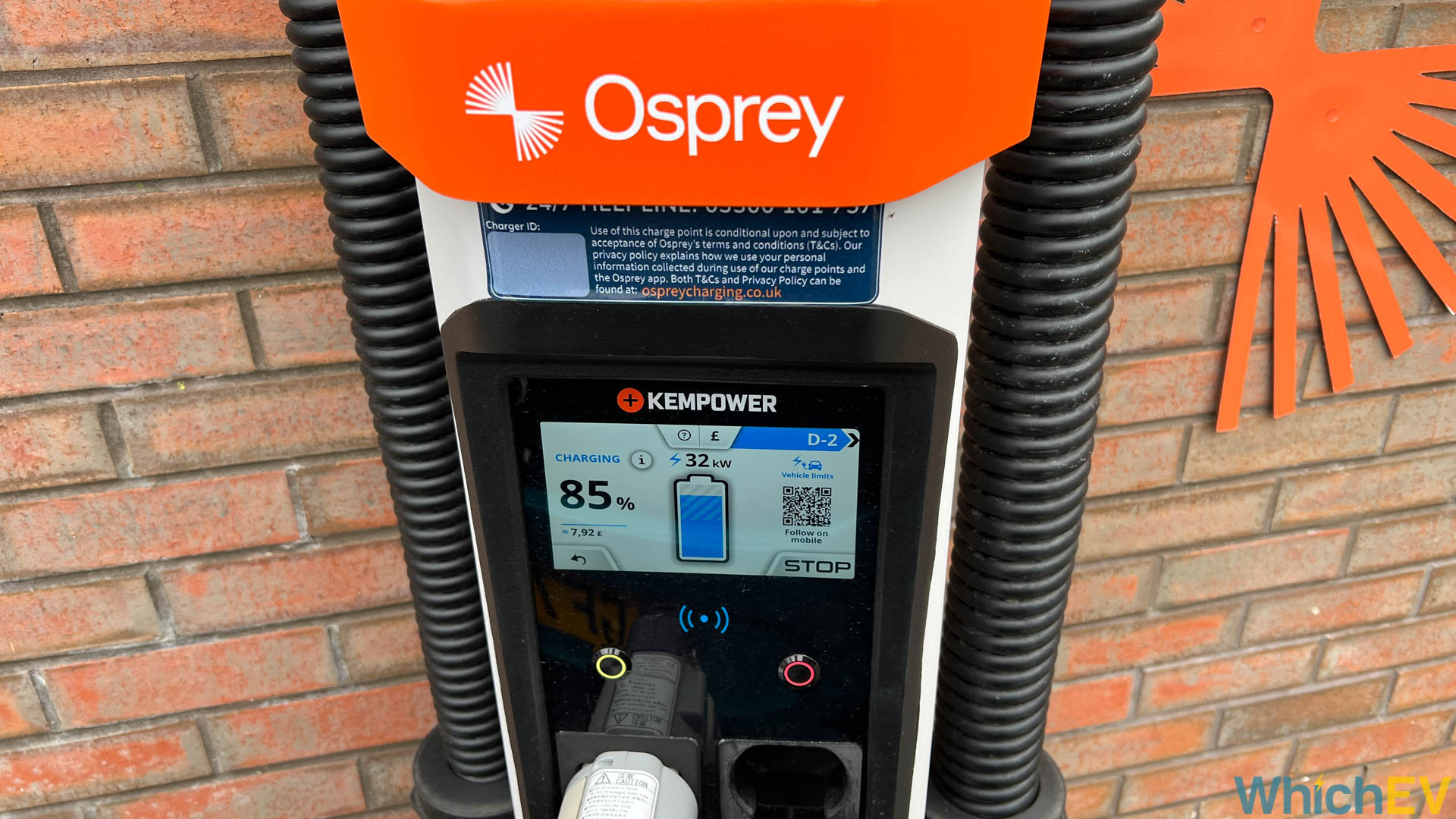 An EV is a great choice for a person with a disability, too. EVs tend to have a lot more safety features built in as standard – for example lane keep assist, adaptive cruise control, automatic safety braking and other proximity-related sensors that can help warn of collisions. Since they don’t have gears, EVs are also easier to adapt for people with reduced mobility, for example via an accelerator that works via a ring on the steering wheel.

A suitable EV for a person with a disability is entirely possible. Charging, however, can be a different issue. You can choose a home charger that meets your accessibility needs, but you will have far less control over configurations when out and about. For example, safety always takes priority with UK legislation, so you’ll notice that public chargers tend to be ‘up’ on a kerb – probably with a physical barrier such as reinforced bollards to prevent damage from someone who makes an error while parking and has a collision. This is fine when you’re able bodied, but it can be a nightmare if you’re wheelchair bound. 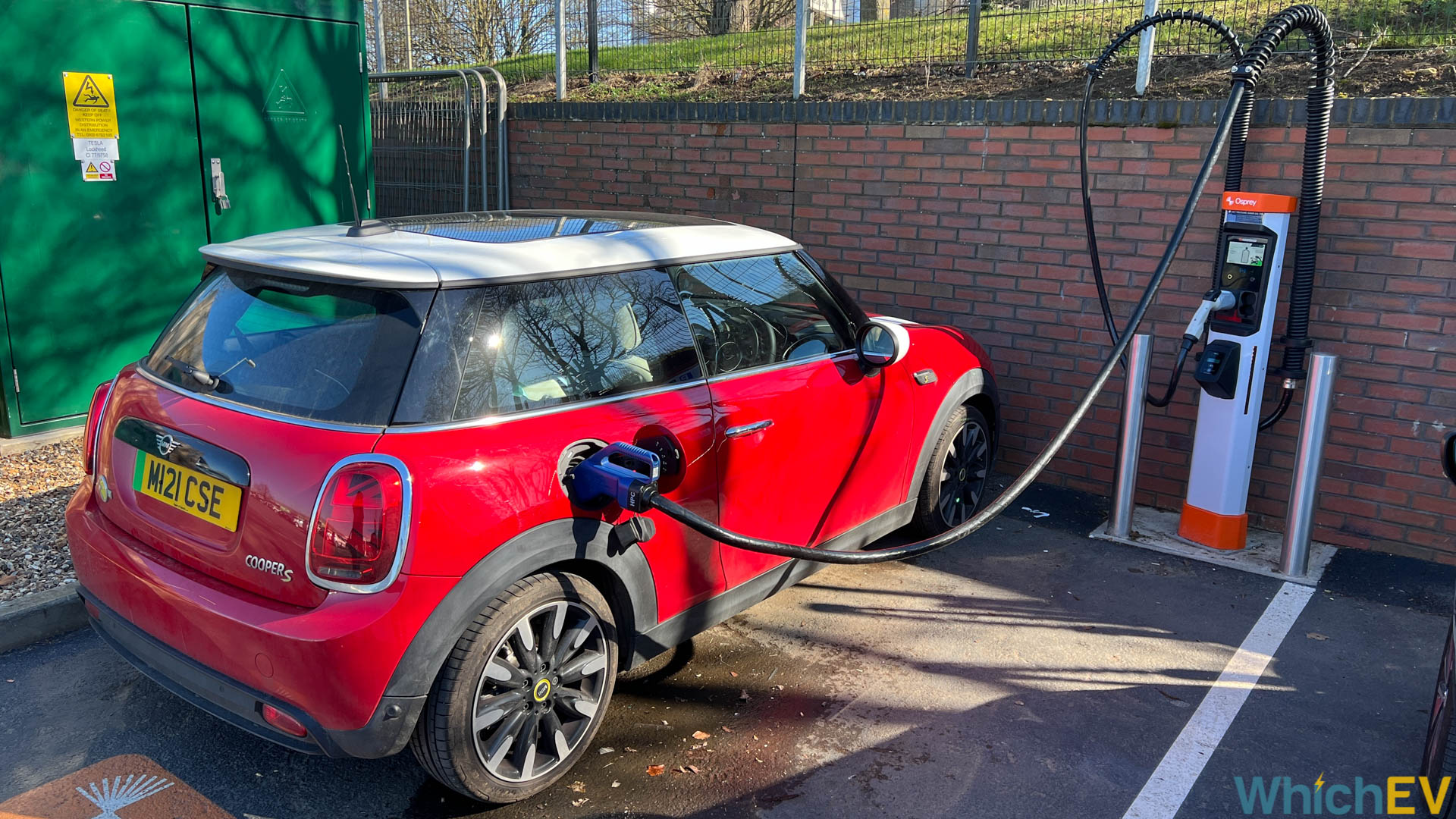 We asked Roger Warner to explain to us what he looks for when public charging. He has been documenting his EV journey via his own YouTube channel, Warner’s Wheeling About. He has spent the last 18 months looking at the challenges of using public chargers, with the aim of raising awareness, so that people planning new installations at least take into account the problems that disabled people can face.

What does Warner look for in a public charger?

“The things that I personally need as a disabled driver is access,” says Warner. “I need to be able to get my wheelchair in and out of the car. That's the primary thing. The second thing is that if I'm alone, I need to be able to do it on my own. And I need to know that I can manage the cable and plug it into the car.” The thick, sometimes water-cooled cables can be extremely heavy and unwieldy, which is hard enough if you’re able bodied. But if you need to use your arms to move your wheelchair, you won’t even have them free to carry a cable. 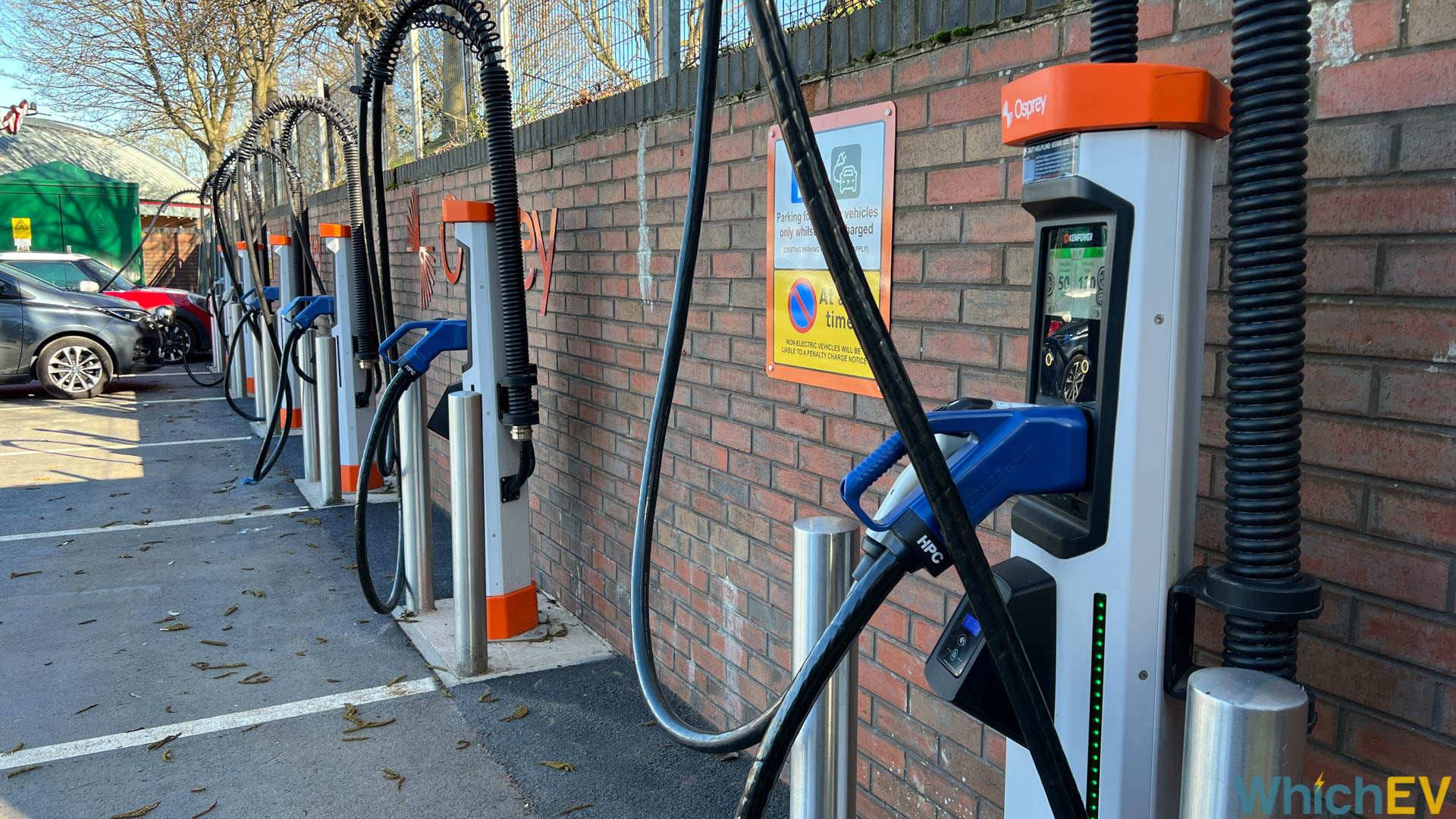 There are other concerns too. “Obviously, I need to be able to see the screens and to use the credit card or the RFID card, and that isn't always possible,” continues Warner. “In fact, maybe 10% of the machines that I've used are possible to use, and the majority are not. So that's quite a concern for me. Another thing to take into consideration is if I can't find a parking space that has got a wide gap between it and there is no disabled drivers’ parking space, I've either got to stay in the car or if I come back and somebody parked next to me and is too close to my car, I can't get back in my car. So I've got to wait until they've finished.” This makes regular charging bays problematic. “I need to find a place like a motorway service station where I know that if I can’t get back in my car, at least I can sit inside in the dry in the restaurant with a cup of coffee.”

People in wheelchairs such as Warner benefit from charging bays with disabled access just as they benefit from wider regular parking bays. But there are special considerations with a charging bay because the car occupant isn’t just exiting and entering their vehicle – they also need to be able to access the charge point. “If you've got a wheelchair, you need a minimum of one metre’s width to be able to turn around and operate the charge point,” says Warner. “At one new installation I went to recently, they had a white hatch line space between the cars, but it was only eighty centimetres wide, which is the width of my wheelchair. This puts you so close to the car that you can't turn around.”

Examples of good practice in Banbury

The new Banbury Osprey station has one wider bay that Warner finds fits his needs well. “This space, although it's not dedicated, has plenty of room,” he says. “The width is adequate.” Warner also needs to consider how the charger cable can get to his car. He drives a Mini Electric, where the charge port is on the driver’s side whereas the charge station is on the passenger’s side if you back in. An able-bodied person can just walk behind their car, but Warner has difficulties with this because of his wheelchair, so had to park facing forwards. The cable was just long enough to reach.

The Banbury Osprey charger has some other examples of good design for wheelchair users. “There are no curbs, and I can actually get very close with my wheelchair,” says Warner. “The RFID reader is nice and low, and the screen is in a good position where I can read it and there's no reflection from the sun.”

Nothing can be done about the weight of the cable, however. For safety reasons, this is a huge, sturdy wire. Warner has to rest the plug end on his lap and wheel across from the charger station to the charger port on his car. He has a trick for when he’s plugging in such a heavy cable. If the weight drags him back it could tip over his wheelchair, so he only puts one wheel brake on while plugging it into his car. This way, if the weight does shift, he spins round instead rather than ending up on the floor.

During our session with Warner, he managed to connect his car, albeit with some need to reposition himself. “It looked difficult, and it was,” he says. “But at least it's doable.” Warner also found the contactless payment system easy enough to use. Overall, he said the design of the new charger station was well thought out. At Banbury, Osprey is using its latest Kempower units, which include features like dynamic load balancing, which shows you in advance the current maximum power output before you start to charge. This goes up to 125kW with regular 400V EVs but will drop down if all other bays are in use. 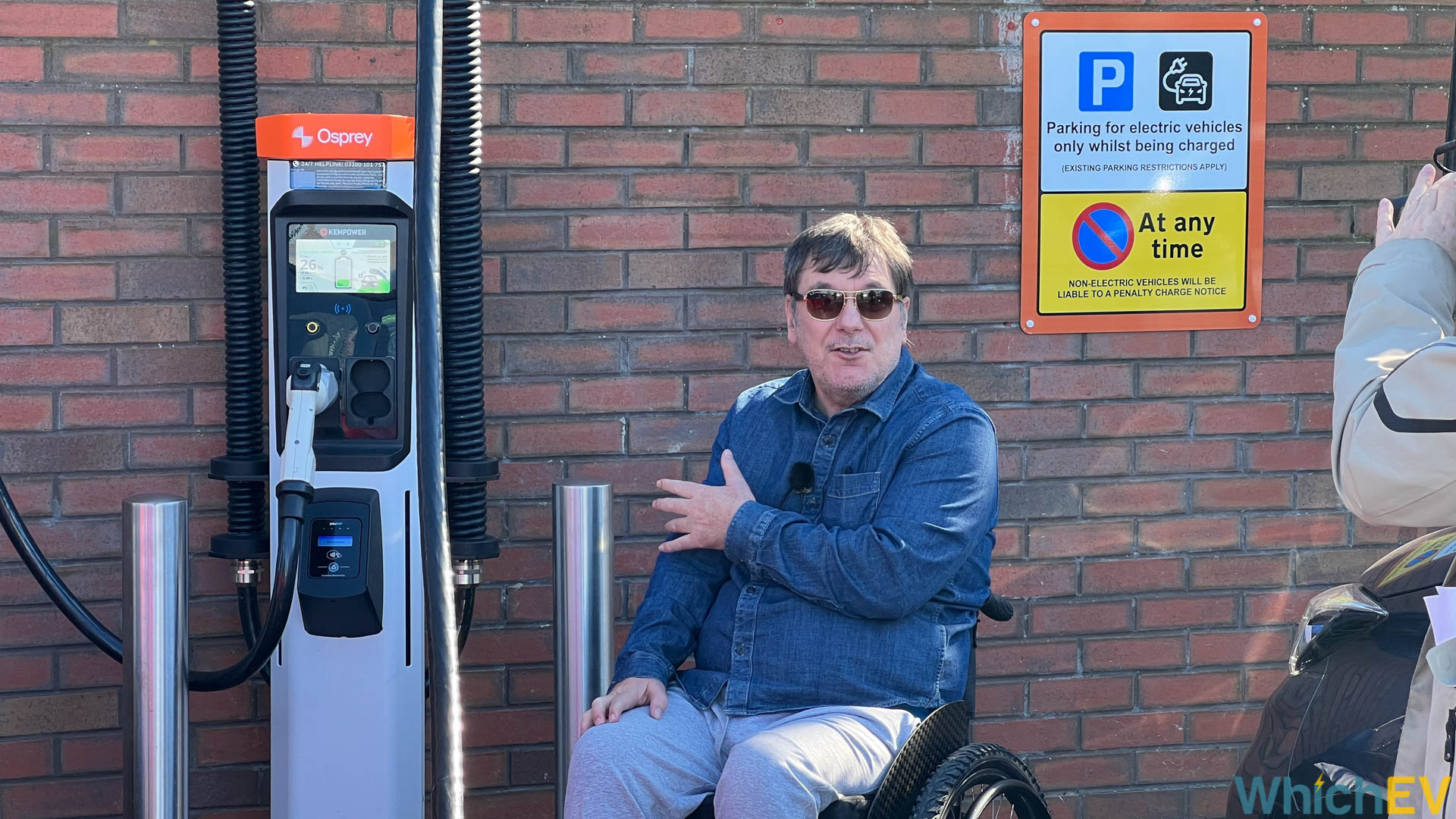 Commenting on the general design, Warner says: “The two protective poles are much further back than in many chargers. If they are a long way forward, this prevents you from getting close to the machine. With this Osprey station they are six or eight inches away from the unit, which allows me to get right up close. Another good thing is the angle. Quite often I find that I can't see the screen because when it's high up and it's angled in a certain way, you get a reflection on the screen. When you're low down, you can’t see what it's saying. This Osprey one seems to be much more ergonomically friendly to somebody low down in a wheelchair like me.”

Another important factor is the positioning of the cradle holding the charging plugs when not in use. This needs to be at arm level for a person in a wheelchair. “If you're trying to do something up high, it's much more difficult.” The Osprey chargers have the cradle at a low enough height for wheelchair users. They also have a spring holding the top of the cable. “This seems to help when lifting the weight of the cable and it makes delivering the cable to the car that much easier.”

It’s obvious that there are a lot of factors that need to be considered when making a charging point accessible for people with disabilities. We have focused on a wheelchair user in this article, and there will be subtle differences for people with other disabilities. While the Osprey station in Banbury has one bay that is excellent for a wheelchair user’s needs, and its charger station design is good too, lots of locations do not fare so well.

There is a lot of work still to be done to make EV charging accessible. The ease of driving that an EV offers can help give people with disabilities the mobility they need. But charging networks must consider accessibility as they roll out new locations to accommodate the huge upswing in EV ownership that is now underway. We really hope that they rise to the challenge, so this important section of society is not excluded from the revolution in electrification.