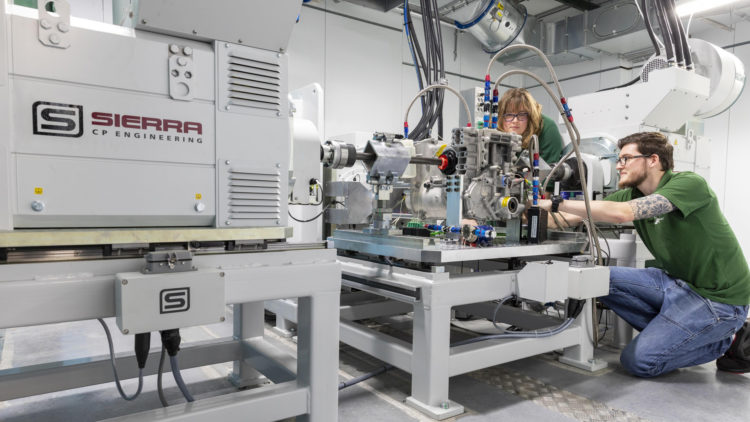 Transmission technology specialist Xtrac, unveiled its advanced transmissions at Autosport International, which took place earlier in January at Birmingham's NEC. The new technology which includes an e-axle for high-performance EVs, will be used for the upcoming 2021 FIA World Rallycross Championship.

The Xtrac P1316 e-axle is designed for integrated lightweight electric vehicles (ILEVs); competitive racing cars need to be as light and nimble as possible – it's even more important for an EV as it can significantly impact the overall battery life. If a vehicle is heavier it'll require more force to push it forwards and as such carves into the vehicle's driving range.

As such, the e-axle sits at 21kg, which is thanks to Xtrac's own ultra-high specification XM023 material, which can be found within some of its components.

The manufacturer will supply the P1316 to the Austrian company Kreisel, which the FIA has selected as the supplier for its 2021 World Rallycross series. Kreisel is responsible for the motors, inverters and battery packs found within these four-wheel-drive race cars. Each EV will include two single-motor e-axles; one at the front, another at the rear.

Read next: What is Extreme E? Everything you need to know about the electric off-road SUV racing series

“Our ability to deliver a competition-ready EV gearbox reflects our continuing investment in transmission technology,” says chief executive Adrian Moore. “No other supplier can deliver a motorsport EV gearbox virtually off the shelf, which is why the motorsport industry acknowledges Xtrac as the world's leading supplier of motorsport transmissions.  I'm delighted, of course, that these vital commercial contracts also enable us to create new jobs within our industry.”

Xtrac's addition is thanks to technical advancements in its efficient and lightweight Formula E transmission systems. The P1316 has an overall ratio of 7.90:1 and has a power rating of 250 kW – the maximum power that's available in Formula E – and has an input speed of up to 15,000 rpm.

The upcoming vehicles will also have a multi-plate ramp type limited-slip differential, which can be adjusted externally if a team or driver wants to tweak it.

Moore foresees an exciting future for Xtrac both within the UK motorsport industry and on the global stage: “We have compelling technology to help make motorsport even more exciting, which also influences the crucial evolution of the next generation of road cars.”

Whilst the technology has been designed for battery-powered rallycross vehicles, the gearbox can also be used for circuit racing as well as electric touring cars.

Elsewhere, the company has invested substantial capital in two new 200 kW test rigs (pictured at the top of this article); they're designed to consist of 3-axis and 4-axis rigs. The latter means the company can test twin-motor designs – something similar to the Porsche Taycan.

It's great to see another British-born manufacturer flourishing and embracing the EV change; established in 1984, Xtrac has seen a lot of change over the years, where given its pedigree in motorsport and high-performance vehicles, the company is putting its stamp on the future of electric vehicles.

Toyota's new hydrogen-powered Mirai will go on sale in 2020