On 22 November 2019, Formula E entered its sixth season; inaugurated in 2014, the all-electric motorsport has been at the forefront of EV innovation and is paving the way for a greener future in motor racing.  Recognised by the Fédération Internationale de l'Automobile (FIA), the sport has seen plenty of success – from teams rising to the challenge to new ePrix circuits arriving on the scene.

Having managed to attract over 410 million viewers worldwide in last year's series, the new 2019-2020 is set to be the most-watched, most competitive Formula E seasons to date.

In this article, we'll look at everything you need to know about the motorsport, including a breakdown of the rules, the vehicles themselves and a detailed race calendar with all the participating teams so that you know when and how to watch Formula E races.

Read next: Formula E to be given World Championship status in the 2020/21 season

Formula E vs Formula 1: What are the differences?

From the vehicle's aerodynamics to the way it operates; there are lots of differences between the two motorsports. Let's start from the design: a Formula E racecar is designed to be efficient (lowest drag coefficient), whereas a Formula 1 racecar is hot on aerodynamics. Unlike their Formula 1 counterparts, the design of a Formula E racecar remains the same across all of the competing teams – manufacturers can't tweak it to gain a competitive edge. 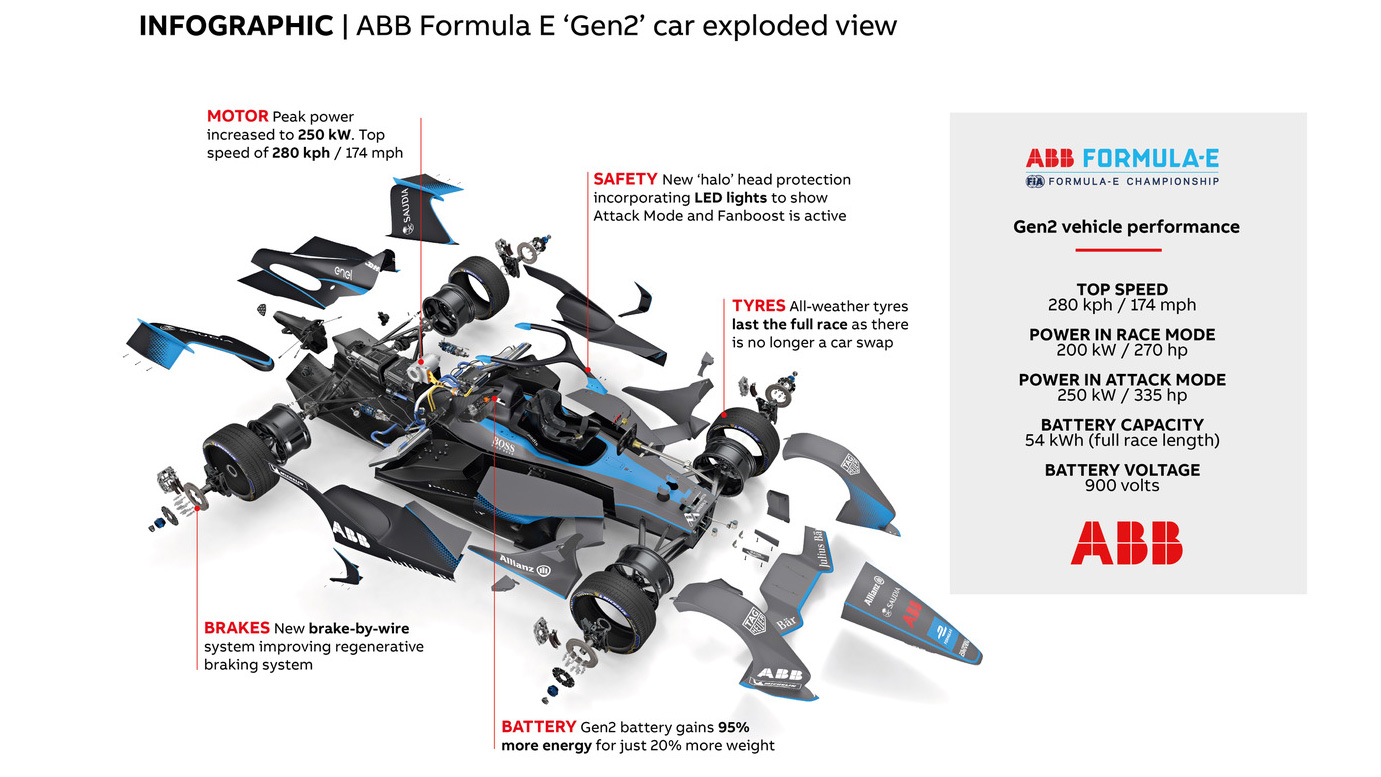 Made by Spark Racing Technology (SRT), the SRT05e (aka Spark Gen2) all-electric vehicle runs on a 54kW battery pack and adopts the same Formula 1-style Halo cockpit protection system. Unlike previous years, the 2018-19 season saw the first all-electric racecar complete an entire race without having to change vehicle. Prior to the SPark Gen2, drivers had to come in to swap cars – a similar principle that applies in other motorsports.

Read next: Alcon unveils its latest brake-by-wire system for the 2020-2021 Formula E season

Made for street racing, the SRT05e's single all-electric motor has a peak power of 250 kW (335hp), which propels the Gen2 vehicle to 62mph from standstill in 2.8s, and has a top speed of 174mph. By contrast, a Formula 1 racecar has around 1,000hp, accelerates 0-62mph in under 2.7s and a top speed in excess of 210mph – as such, street circuits need to be much wider, tracks have to be longer and have plenty of run-off areas.

Aside from the raw specs, the most noticeable difference between the two vehicles is the noise. A Formula E racecar sounds like a sci-fi spaceship – it's not too dissimilar sounding to modern-day all-electric road cars, such as the Tesla Model S. In fact, what you hear most in a Formula E racecar is its racing transmission and tyre noise.

Back in the F1 camp, the racecar houses a single turbocharged V6 hybrid petrol-led engine. As you can imagine, the engine inside an F1 racecar is far louder and wouldn't be suitable for most inner city-based circuits.

As for the tyres themselves, there are almost a dozen compound types to choose from in F1, while in Formula E, all cars have to stick to 18″ Michelin Pilot Sport all-weather tyres, where two sets are expected to last the entire race weekend. 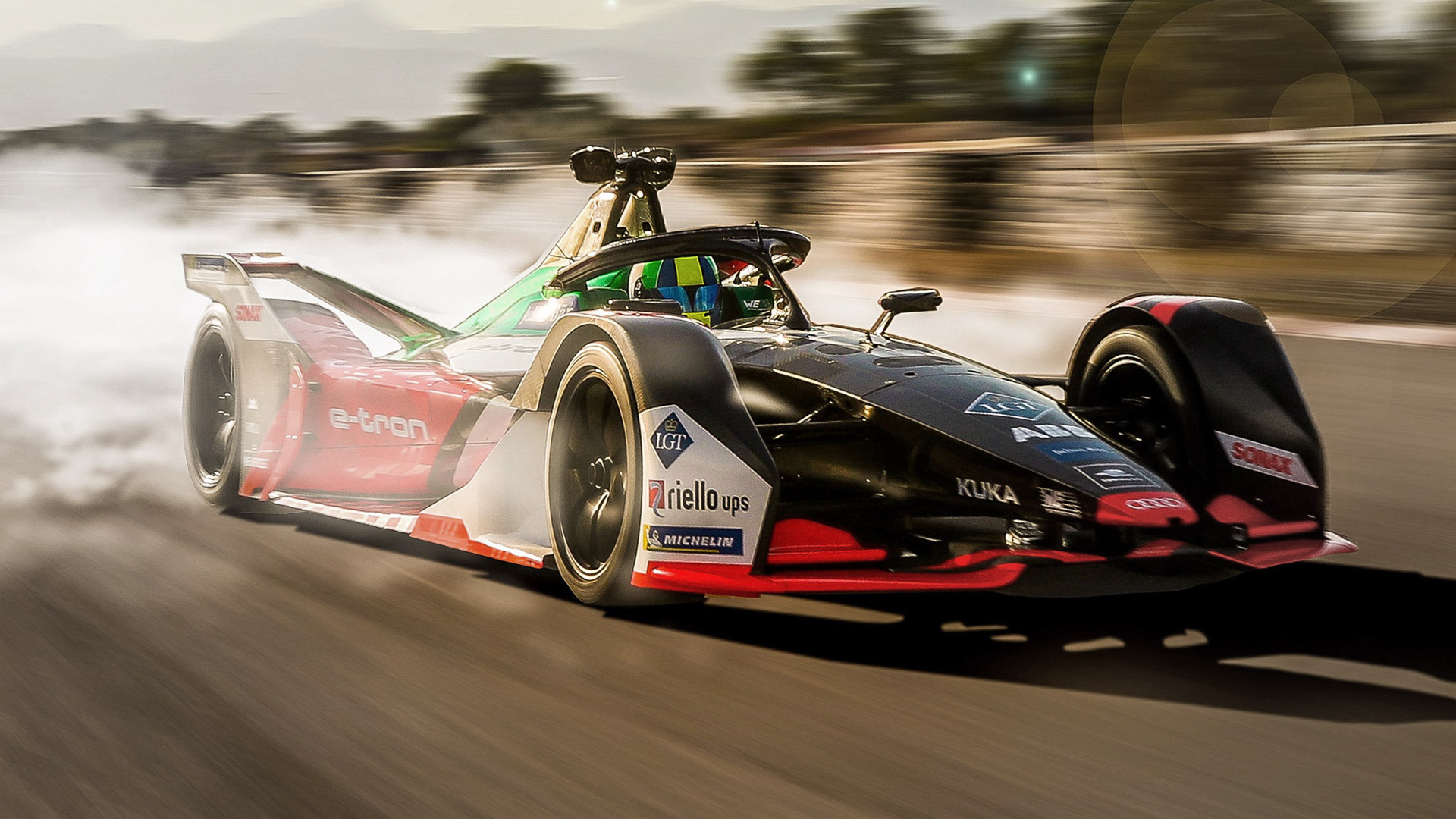 Despite still being in its infancy (vs Formula 1), the Formula E racecar has already undergone a few alterations, the most notable came from the introduction of the Gen2 vehicle in the 2018-19 season. The newer vehicle saw massive improvements in the battery pack, whereby cars could now go the entire race without having to pit.

Aside from the driving range, the Gen2 Spark SRT05e saw a performance increase, where despite weighing slightly more than its predecessor it manages to go faster and reach 0-60mph in a shorter time. It just goes to show the technological advances being made in the motorsport, and as a result, consumer vehicles have also seen drastic improvements.

Read next: Xtrac unveils a new transmission for the 2021 FIA World Rallycross Championship

If you've been watching Formula 1 for decades, Formula E will seem vastly different. The FIA wanted to try something different, and with the introduction of the Gen2 vehicles, the motorsport saw further tweaks to the race format.

In Formula E, practice, qualifying and racing take place in one day; they're not spread across a whole weekend like F1. During the entirety of the day, teams only have access to two sets of Michelin Pilot Sport tyres.

The two practice sessions that take place at the start of the day, and are broken down into a 45-minute Practice 1 and a 30-minute Practice 2 session. Throughout these two periods, drivers have full access to the 250 kW (335 hp) power unit.

Next comes qualifying; here is when things get slightly complicated: teams are broken up into four separate groups, each of which consists of six racecars – there are 24 drivers in total, which span across 12 teams – group numbers are defined by the drivers' current position in the championship (or for the first race, their previous year's championship position). As with Practice 1 and 2, drivers are given 250 kW of power.

Qualifying starts in ascending order, where each group is given six minutes to set the fastest time. Once all the group sessions have been completed, times from P7 to P24 are locked in and thus given their starting grid position.

The top six, however, go into another qualifying session called ‘Super Pole'. Drivers have one lap to get the fastest time. The one who qualifies in first receives three additional Championship points (somewhat similar to the fastest lap set in an F1 race).

Next comes the race itself: as Formula E racecars don't require to warm up like an F1 racecar, drivers pull up to the grid in the respective order of their qualifying times. Now, unlike other motorsports, Formula E has a time limit and doesn't resort to the number of laps a driver completes.

As such, a 45-minute timer is allocated for each race. Once the timer runs out, there's an additional lap that drivers must complete to finish the race. The last lap is triggered by the leader crossing the line.

To make matters even more complicated, cars are not allowed to pit, cannot recharge and have to rely on active regeneration only, where around 30% of power is transferred back into the battery pack. This makes for interesting scenarios, where at times, drivers have been caught out by the undefined number of laps and have run out of juice before reaching the chequered flag.

The first 25 kW of power comes from a feature called ‘Fanboost'. The controversial feature that lasts five-seconds, is determined by a driver's popularity. Viewers can vote via the Formula E app, online through ABB Formula E website, or via Twitter using hashtags #FANBOOST + #DriverName. Viewers can vote for their favourite drivers six days prior and up to 15 minutes into the race. Once time has elapsed, five drivers are given a single-use Fanboost, which can be triggered after the 22-minute mark.

The secondary boost in power comes from ‘Attack Mode', which gives any driver 25 kW of extra power if they run through a designated area of the track. This area is off the racing line, so is deemed disadvantageous to a driver. The number of seconds granted by driving through the Attack Mode area(s) is revealed by the FIA during the race; this means teams cannot conjure up a racing strategy beforehand.

The two 25 kW modes can be used in tandem, so theoretically five drivers at any given time could have access to the full 250 kW power unit.

While watching the race, you'll know if the driver has access to it, as the Halo cockpit protection system above them lights up in blue if Attack Mode is activated, and purple if Fanboost is initiated.

Once the race is over, points are allocated to the top ten drivers. Much like F1, the points system is as follows:

In this year's 2019-2020 race calendar, there are 24 drivers spread across 12 teams competing for the AAB FIA Formula E Drivers' Championship and Teams' Championship, respectively:

Spark Racing Technology (SRT) is listed as a manufacturer as it makes the same chassis for every team that competes in the Formula E Championship series.

Spread across 12 cities, there are 14 races in total that stretch over a nine-month period. If you live in the UK, you can watch every race live through the BBC's online platforms (BBC Red Button, iPlayer and website). Alternatively, if you live elsewhere, head over onto the FIA's website to find out ways to watch the races.

To make things easier, here's a full race calendar, where we'll italicise circuits that have now been completed for the 2019-2020 season: