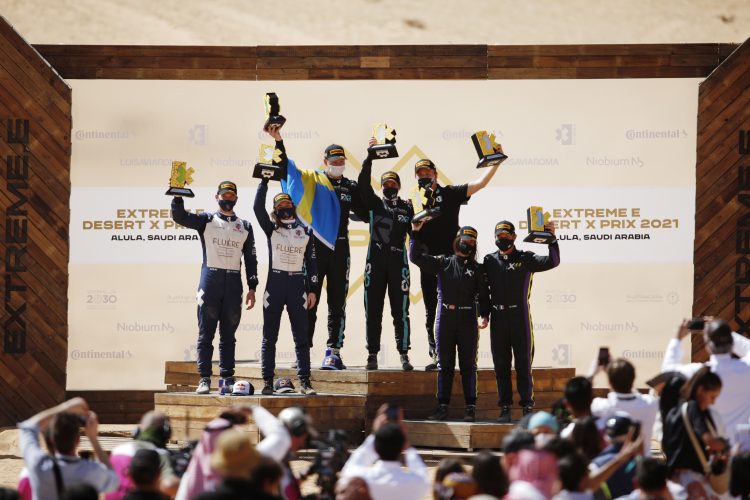 The first ever Extreme E race in AlUla, Saudi Arabia has been won by Johan Kristoffersson and Molly Taylor of the Rosberg X Racing team.

It was an exciting race as, ultimately, nothing could stop Kristoffersson and Taylor from storming to the top step of the podium – not a 60-second penalty for exceeding the 30km/h limit in the driver switch zone on Saturday, nor less favourable grid slots in both the Semi-Final and Final on Sunday.

Formula 1 World Champion and owner of the team Nico Rosberg is very happy with the team and the result achieved.

“We have a fantastic team of engineers and mechanics, who prepared perfectly for this first weekend with so many unknowns, and Molly and Johan produced some phenomenal driving,” he said. “Neither of them put a foot wrong in really tough conditions, and they both showed unbelievable speed out there – their performance was really inspiring and I felt really proud watching them.”

The final of the race saw Andretti United in pole position on the right, with Kristoffersson lining up in the middle for Rosberg X Racing and X44’s Sebastien Loeb taking up the third grid slot on the left. However, Rosberg X had always the situation under control and ended up winning by 23 seconds ahead of Andretti United.

The exciting first round is what Alejandro Agag, Founder and CEO of Extreme E, hoped and expected by this unique competition.

“We’ve worked so hard on this for many years, and finally everything has come together this weekend. It really has been beyond my wildest expectations,” he said. “If I had written a script for the perfect weekend, I could not have come up with anything better than what we have witnessed these past two days – I’ve never seen such extreme racing in my life.”

Extreme E is a rally championship that solely uses electric cars. The teams will battle through five remote locations that are severely threatened by climate change. The competition aims to highlight different issues such as melting ice caps, deforestation, desertification, and rising sea levels.

As we reported Extreme E is broadcasted on ITV as well as BT sport, and the BBC Red Button.