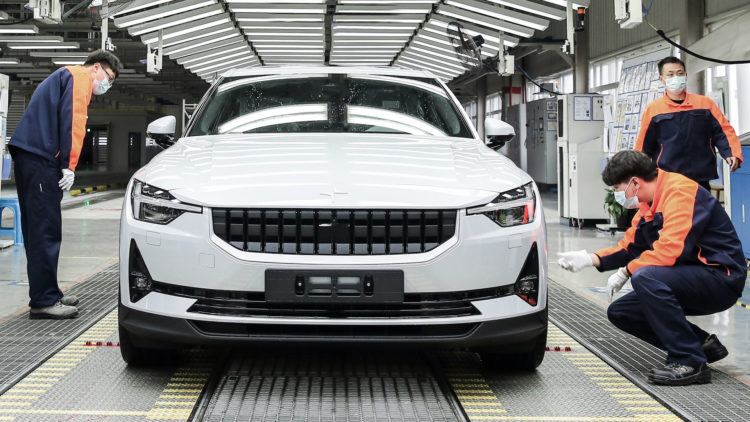 It's quite fascinating how brands come into our lives. Asking anyone about Zhejiang Geely Holding (ZGH) a few years back, would have yielded blank faces all round, but it is the financial powerhouse behind Volvo, Lotus and the London Electric Vehicle Company (the folks that make electric black cabs).  ZGH has also been pushing a new brand called Polestar, whose aim is to deliver design-focused, high performance electric cars – armed with cutting-edge technology. WhichEV looks at the latest news from China and considers how much of a threat the Polestar 2 might be to Tesla.

If we told you that the Polestar 2 has a minimalistic, Ikea-esque interior, a claimed range of almost 300 miles and a 0 to 62 acceleration time of close to 5 seconds – and all with a price tag under £50,000 – you might be forgiven for thinking Model 3. Completely by chance, we walked past one at Hamburg airport last year and got some close-ups. At the time, there wasn't a lot of information to go with the car. That's now changing.

According to ZGH, production of Polestar 2 has officially begun in Luqiao, China. It will initially be delivered into Europe, followed by China and North America. It is the first electric vehicle to be produced at the facility and the company has high hopes for the brand. But there are also challenges, readily acknowledged by Polestar CEO, Thomas Ingenlath.

Ingenlath announced, “The world is facing enormous upheaval in the face of the coronavirus pandemic. We start production now under these challenging circumstances, with a strong focus on the health and safety of our people. This is a great achievement and the result of huge efforts from the staff in the factory and the team securing the supply chain. I have a huge amount of respect for the entire team – thanks to them!”

ZGH hopes to be able to leverage Volvo's well-established reputation for the production of the Polestar 2. “Being able to produce in Luqiao means we are able to bring Polestar 2 to market with high build and quality standards right from the beginning,” explained Ingenlath.

First revealed in February 2019, the Polestar 2 will be available in ten markets across the globe. To make things easier during this global crisis, orders can be secured with a full-refundable deposit of just £1,000. Order books are being opened as production begins to come online.

It's also the world’s first car to feature a built-in infotainment system powered by Android, featuring Google Maps, Google Assistant and the Google Play Store. Saves you connecting your phone on Bluetooth, we guess.

When you have a holding company that measures revenues in the billions, and the ability to share knowhow with a partner company that has over 90 years' experience, then you should be able to compete in the global EV market. The challenge will be, as ever, positioning a car next to the Tesla Model 3 (and now the Model Y), when your product costs more, is slower and doesn't have the established reputation in this market sector.

It will be interesting to see if the Polestar 2 can deliver enough in-cabin quality, alongside on-road excitement, to make you forget about the Model 3 and choose the Polestar 2.