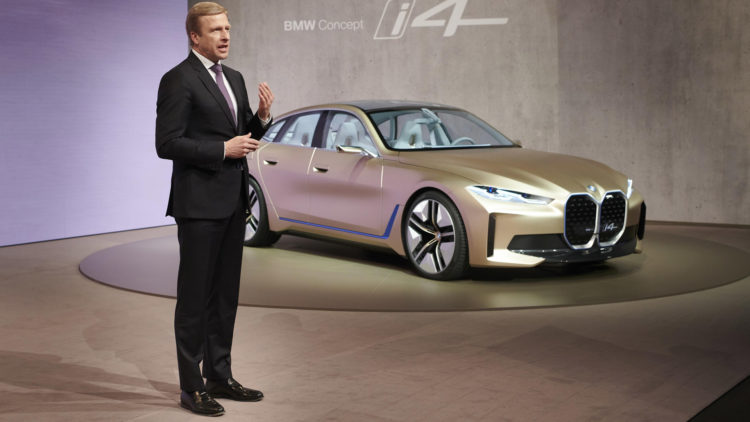 By the end of 2021, BMW plans to have more than one million vehicles with all-electric or plug-in hybrid drivetrains on the roads. They are working to offer five all-electric series production vehicles in the near future. Joining a new i3 and Mini Cooper SE, the Munich-based company will launch an iX3 (made at its plant in Shenyang, China), alongside the BMW iNEXT and BMW i4. All five of these launches will use the same fifth-generation electric drivetrain technology that will feature on the new 7 Series. WhichEV asks: Has BMW turned the corner in terms of mentality, monetary investment and manufacturing focus?

When BMW came out with the i8 in 2009 and i3 in 2011, it was hailed as a leader – and this was the first time an established giant of the auto industry began serious investment in EVs. Publicly,  progress since then has been slow. At CES 2020, BMW showed off a full set of brand new models, all of which used fossil fuels.

Last year, for the first time ever, the company delivered more than €100Bn revenues. Now, according to BMW's Chairman, Oliver Zipse, they are working hard to get ahead of competition -pledging to spend over 30 billion euros in future-oriented technologies, through to 2025.

“The ability to integrate diverse technologies to form a complete system is vitally important. Those companies capable of developing and combining hardware and software in equal measure will shape the future of the automobile. In this respect, we are quite clearly in the fast lane”, Zipse told investors.

In that statement, the keyword for the Munich-based manufacturer is ‘future'. That's why it founded Critical Techworks IT in 2018, in order to secure a different set of expertise and skills. As a result, BMW has now become one of the largest IT employers in Germany with over 5,300 employees in the field of data analytics. There has also been a big effort to secure the necessary cobalt and lithium supplies necessary for large scale battery production. They've also worked hard to create a completely different in-car experience for the 21st-century.

According to Zipse, demand for EVs in 2020, is set to be around double the number shipped in 2019. BMW expects to see a steep growth curve through to 2025, with the sale of all-electric vehicles set to skyrocket.

Within four years, BMW expects to have fully refreshed its fleet, with at least 25 electrified models on the road, and as many as possible with 100% electric drivetrains.

A key driver for BMW's newly invigorated interest in all-electric solutions, is the stream of increasingly punitive fines from local and regional government bodies. There are also a large amount of ‘efficiency savings' to come from this shift in focus, although it wasn't clear how many of these ‘efficiencies' would comes from redundancies. Half of BMW's existing fossil fuel engine production capability will be transitioned to electric motors by the end of 2021.

“We have set ourselves clear targets for 2020. High priority will be given to profitability and free cash flow in our management of the business going forward”, said Nicolas Peter, Member of the Board of Management of BMW AG, Finance.

Worthy sentiment, given that in 2009 BMW's share price was almost 250% higher than it is today. Last year, in the USA, a single Tesla model outsold all BMWs. Despite posting increased revenues over each of the past five years, profits have fallen and there hasn't been a clear leadership strategy on electrification. That now changes, according to BMW's Chairman, Oliver Zipse.

American car companies discovered a long time ago, that you can completely ignore aerodynamics and get increased speed from larger and larger engines. It doesn't matter that a car might weigh more than 2,500 Kg, you can just burn more petrol or diesel to keep it moving quickly. The dynamics of electric cars are somewhat different. Weight is a killer. What BMW and its fellow high-end brands need to master, is how to deliver a Tesla-killing interior, without adding so much weight that you get left at the lights time after time.

According to Zipse, the strategic move of combining data analytics with their car manufacturing expertise, will let BMW take pole position in the electric vehicle market for years to come. That's a laudable ambition and we wish them well.