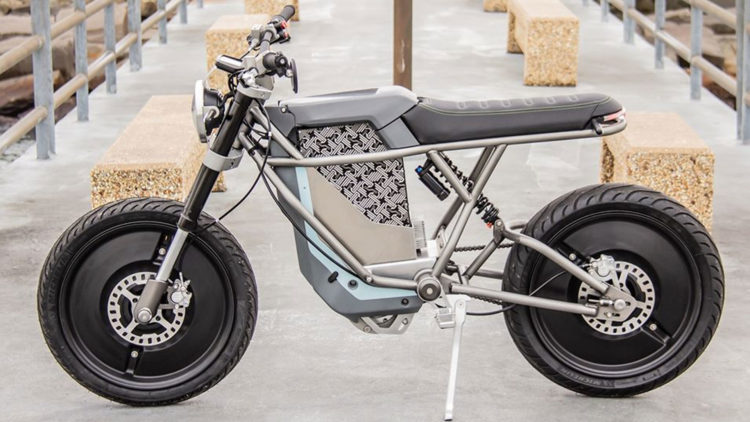 Cleveland Cyclewerks has unveiled its first 85MPH electric motorcycle and it looks like a futuristic lean, mean riding machine. Given that the global market for all forms of electric bike was $16 billion back in 2017 and that this figure will increase toward $24 billion by 2025, there's certainly a lot of growth potential. WhichEV checks the forecasts to see whether the chaps from Cleveland have what it takes.

Just as Tesla is using up to 75% of same parts for both the Model 3 and teh Model Y, so this American-based cycle company seems to be doing the same with the recently announced Falcon 01 and Falcon BLK. With electric vehicles, modular is the order of the day, giving faster development times, easier builds and simpler maintenance.

This little montage takes you from the early drawings, to the pre-reveal silhouette and finally a ‘Serpents and Sinners' enhanced shot of the final product. Like all images on WhichEV, click to open a larger version in a new window.

Both the 01 and BLK have 17-inch cast aluminium wheels, wishbone frame, mid-mounted motor, CARD dual-piston hydraulic disc brakes, inverted front fork and a rear coilover hydraulic shock. In both models, the manufacturer claims that the batteries can be recharged to 80% in 45 minutes and on to 100% in 90 minutes. That's the kind of charging IQ that leads to much longer battery life.

Where the bikes differ is in the offering:-

For those wanting to customise their bikes even more, there are further options available including SPHERE hemispherical brakes which offer a larger braking surface with less rotating mass and have the advantage of tool-free pad changes and aero-wheel disks on the Falcon BLK.

Riders can use either their phone or the bike’s built-in display for critical info like speed, battery life, ride mode, and more.

The approach being taken is an interesting move by the company. Not only do they appear to be taking a leaf out of Tesla's sales strategy with the two models, but they are clearly going for the genuine motorbike fan and not the scooter market (where others have focused their efforts and interest).

Priced $14,995 for the Falcon BLK and $7,995 for the Falcon 01 it's available in the States right now – a year or so ahead of Tesla's quad-bike. There's no info on UK availability at the moment. You can see more of the bike in action on the Falcon Facebook page.

Just in case the design/price combination isn't your thing, you could always do a rough-n-ready EV conversion on an old petrol bike, like this chap managed..