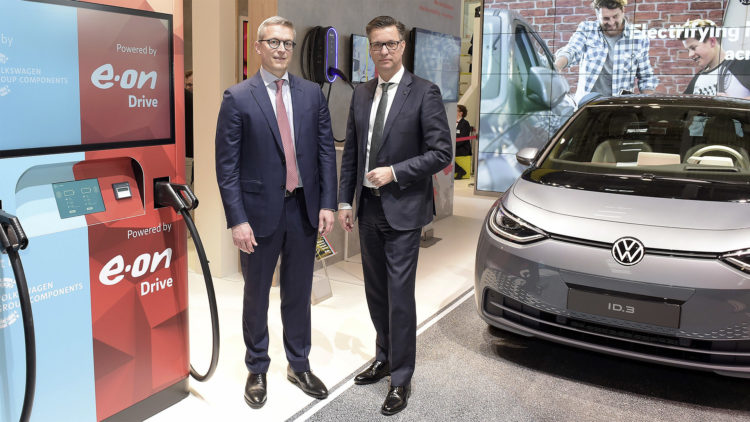 Range anxiety is the single biggest factor in keeping people away from buying an electric car. Building more rapid charging stations can alleviate this fear, as drivers know they will be able to pick up a sensible boost in no time at all. VW is working with E.ON in Germany to build half a dozen special charging stations near Essen, between Dortmund and Dusseldorf. If the pilot scheme goes well, it could provide the blueprint for a network of new charging stations across Germany and, perhaps, the rest of Europe. WhichEV looks into current affairs.

There were lots of cool ideas at the Freight-in-the-City show last year. One of the simpler stands offered a particularly interesting solution to the challenge of: How do you deliver enough juice for fast, large scale charging – without having to re-build the local grid?   The answer is in ‘caching' the necessary electricity with a farm of batteries. That company was called Zenobe and their target market was commercial charging for electric buses in city centres. The VW/E.ON version is aimed at the consumer and appears to be ready for the mass market.

The batteries in question, form a reservoir of power that can be tapped into quickly. They augment whatever flow is available from the grid, without any expensive upgrades to the local backbone.

Depending on the car, the new charging station concept being proposed by VW and E.ON could give an electric vehicle an extra 125 miles of range (200km) is just 15 minutes.

Chairman of the Board of Management of Volkswagen Group Components, Thomas Schmall, explained: “The  flexible  ultra-fast  charging  station  developed  by  us  is  an  important  component for a comprehensive network of charging points. At the same time, its innovative approach to quick and easy installation enables us to meet the needs of our customers. The cooperation with E.ON is an important step towards integrating this technology into the charging infrastructure quickly and in line with demand”.

By integrating a battery system, it will be possible to install ultra-fast charging stations almost anywhere and at significantly lower cost – and all without civil engineering or mains connection.

E.ON Board member Karsten Wildberger said, “E.ON made progress in electromobility years ago and has brought its own ultra-fast filling stations to the motorways of Europe. From the very beginning, we have been concerned with the wishes and problems of our customers and are now taking the next step towards the future with Volkswagen Group Components. By joining forces, we can now offer our customers flexible ultra-fast charging systems that are faster, simpler and cheaper than conventional solutions”.

E.ON has 36,000 traditional charging points installed already and the plan is to add 180 of these ultra fast charge sites in Europe as quickly as possible

To ensure that the battery installed in the charging station always has sufficient capacity, it is permanently fed by a conventional 16 to 63 amp power connection. E.ON is promising to operate the rapid chargers exclusively with green electricity. Updates, remote maintenance and billing of the charging points will be carried out via E.ON's central software platform. The technology meets all the requirements for financial support under both the EU and the German directive and complies with the requirements of calibration law.

Having a modular system, with ‘known' connections to the grid and charge points, should make rapid deployment of a fast charger network much easier.

Given VW's work with Tesco in the past, will we be seeing this kind of installation at major supermarkets?

Setting up the initial programme in Essen is also a nice touch. The area's history has always been closely tied into the coal industry. It would be good to see the city lead the charge in green engineering.