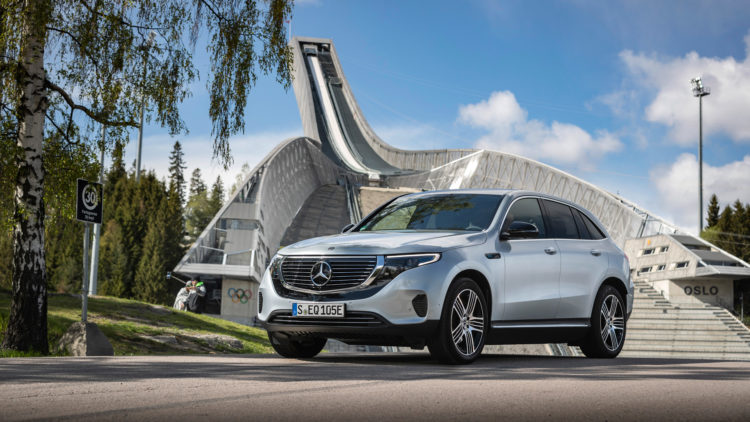 In what may be a blow for American EV fans but a boon for Mercedes-Benz shareholders and Europeans, the company has announced the Mercedes-Benz EQC will not reach the USA until 2021.

The reason for the delay: to satisfy demand in Europe. The news comes just as the crossover SUV has started to arrive in Australian showrooms.

First revealed in 2018, the EQC, which is built on a heavily modified C-Class platform, is comparatively priced with the Jaguar I-Pace and Tesla Model X and has been praised for Mercedes starting to wean SUV customers away from petrol and diesel and as an efficient luxury SUV.

The EQC sports an 80 kWh lithium-ion battery pack and 405V architecture to give it a driving range of approximately 250 miles.

“The EQC launch in Europe and other markets earlier in 2019 generated high interest worldwide for the EQC,” said a statement sent to dealers. “In a recent direction from Daimler AG, it is a strategic decision to first support the growing customer demand for the EQC in Europe. As a result of this decision, the U.S. market launch date of the Mercedes-Benz EQC will be rescheduled to 2021 (originally Q1 2020).”

Ironically enough, a statement to support the EQC launch in Australia stated that the company was never worried about being first in a market. By the new US launch date of 2022 there will be far more EV offerings on the market. Mercedes Benz also plans on releasing 10 new EV models by 2021.

The impact on Mercedes-Benz

While on the face of it this may seem like bad news for the company, it is a clever strategic move, even if the US is the second-largest car market in the world, behind China.

As ExtremeTech notes, the vehicle's competitors will each sell 5,000 units each, if they're lucky. Those sales may well be better placed in Europe, where there is currently more demand for EVs like the EQC. It also allows marketing budgets and other ancillary costs to be shelved or redeployed for other initiatives.

This all poses an interesting question for Mercedes-Benz's competitors: do they try to fill the gap in the US or concentrate on the European market where there seems to be more demand?