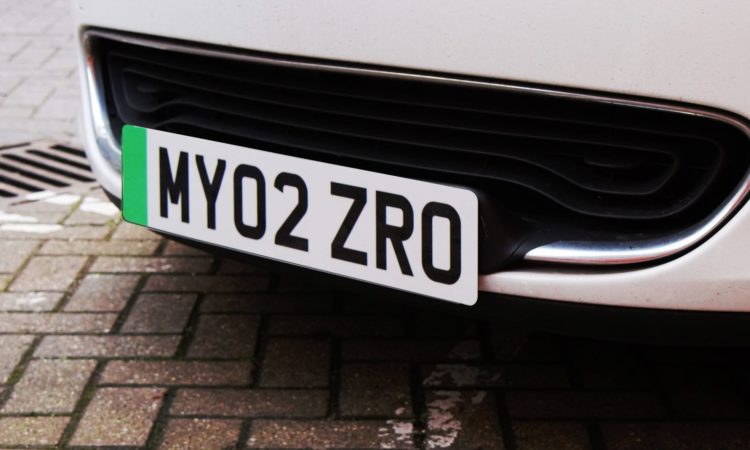 Electric Vehicles will soon have a green “flash” added to the left-hand side of their number plates, and EV haters on social media are green with envy. Motoring advocacy group Alliance of British Drivers posted a very derogatory number plate mockup on its Facebook page, which was followed by the usual series of misinformed criticisms of EV capabilities and EV owners.

That was until members of EV owner groups were notified and piled in to correct the errors, before in many cases being banned by the Alliance of British Drivers page administrator. The incident showed the growing passion for electric vehicles in the UK, which the scheme is aiming to encourage further.

The government’s green flash number plate will allow EV owners to be eligible to bypass congestion zone charges or secure cheaper parking. This initiative will be introduced in Autumn 2020 with the goal of encouraging more drivers to switch to electric vehicles.

Transport Secretary Grant Shapps said: “A green recovery is key to helping us achieve our net zero carbon commitments while also promoting economic growth. Green number plates could unlock a number of incentives for drivers and increase awareness of cleaner vehicles on our roads, showing people that a greener transport future is within our grasp.”

The move to green flash number plates is another sign of how the UK government is aiming to increase the number of electric vehicles on the road. Last month Shapps also announced a £10 million boost for an ambitious on-street residential charge-point scheme.

This type of scheme is definitely considered helpful to gain momentum towards an all-electric future, however Howarth believes that more concrete steps need to be taken.

“It is critical that we do more to incentivise a switch to green, clean transport,” she said. “Incentives like contributions to the up-front cost – for example the £3,000 government grant – and creating value for EV drivers such as the exemption from the ULEZ charge in London and allowing EVs to use bus lanes in Nottingham – can be hugely powerful.”

Also, the CEO explained that initiatives such as the 0% Benefit in Kind rate on EVs can be transformational as drivers can save 30-40% on their monthly car costs which will make electric cars an “absolute no-brainer”. However, she still sees this initiative in a positive light as it could be a match that lights the fire.

“Regarding the green number plates – we are more excited by those incentives that truly add benefits to all EV drivers. Perhaps the number plates may help cities implement some more of these easily to further accelerate the uptake.”

Either way, they’re showing the EV naysayers that electric vehicles are the future, and they’re coming whether you like it or not.