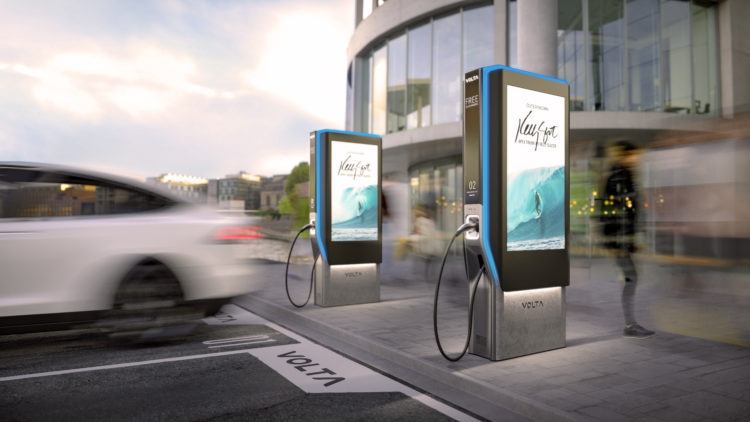 There has been much talk about Germany’s plan to oblige all of its petrol stations to include EV charging points. On the surface, this sounds like a very positive move, as it will potentially force the country to rapidly increase the number of locations available. But this could be the wrong strategy, when charging still takes much longer than refuelling an internal combustion engine (ICE) car. American charging company Volta has an alternative plan and a novel business model that fits charging to EV lifestyles, rather than the other way round. WhichEV talked to Co-Founder and President Chris Wendel about how Volta is different to other charging networks.

“We realised that there was no business in selling electricity,” explains Wendel. “In order to create a massive shift in transportation, you need a business model that evolves over time and fulfils three megatrends. First, the early adopters need a sexy car, which we got with the original Tesla Roadster. Next, you need to take battery costs down so the cars are lower-priced than ICE. We expect this in about 24 months. Finally, you have to overcome the block of range anxiety.” This is where Volta comes in, attracting users to recharge at their convenience with a strategy and pricing model that is subtly different to other charging networks, such as Ionity.

Where the European 350kW Ionity network costs a whopping 69p per kW for ad-hoc users (although much lower for members), and most other networks are considerably more expensive than home electricity, Volta’s charging price is a lot lower. In fact, it’s free – although only for the first 30 minutes with 50kW chargers (the 7kW ones are entirely free). This is because Volta’s business model isn’t about making money off of EV owners, which it doesn’t see as having a future. Instead, the Volta chargers stand out wherever they are installed because of their most noticeable feature – built-in advertising. 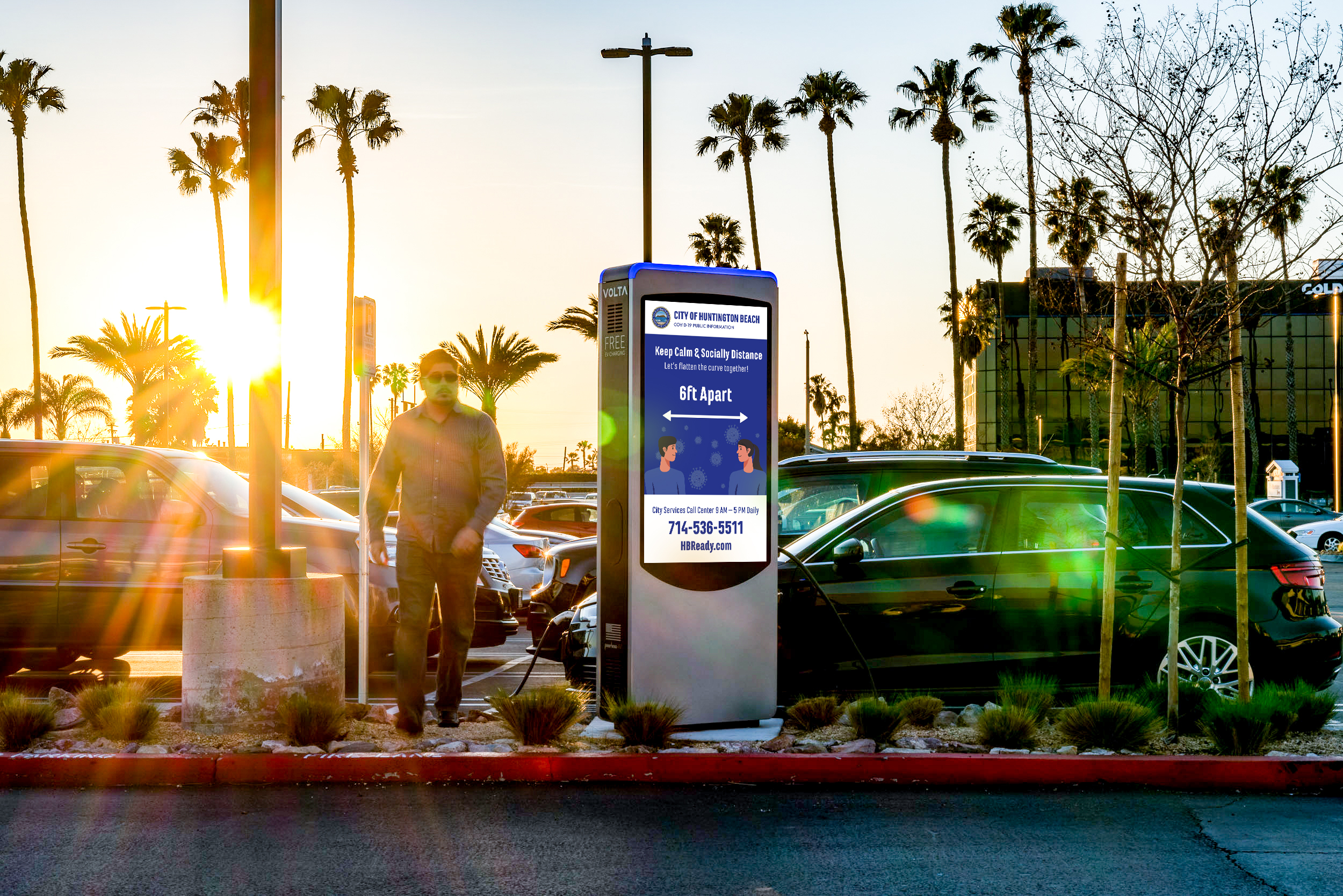 But this is only part of the Volta plan. Another key piece of the puzzle is the relationship with the owner of the location where the charger is installed. “We provide free charging, they give us a good advertising space,” says Wendel. Volta looks for sites where the advertising visibility is worthwhile due to a high volume of visitors to that location. Conveniently, this is also where people are likely to want to charge their EVs – shopping malls, cinema complexes, grocery superstores, and other places where drivers park in numbers to use facilities. This is a win-win, because the free EV charging becomes an attraction for the location, further accentuating the number of people using it. “The first two charging stations are free for the location owners, then they pay to have more.”

The popularity of the concept is made clear by how much Volta’s chargers are used. “Our stations are at almost 80% utilisation,” claims Wendel. “They host 10-12 charging sessions a day where pay-as-you-go stations are more like one or two.” Volta currently makes most of its revenue from selling advertising. The advertising screen can also be used for community messaging, which Volta recently debuted in Huntington Beach. The next stage is changing over to getting half the company’s revenue from site owners paying to have charging points as an amenity for their customers.

However, as with virtually all digital companies, Volta is also looking to another source of revenue from the data it has collected. “We have nine years of user history now,” says Wendel. “We can apply predictive algorithms and machine learning to this to provide insights for network planning. We can work out how EV adoption will expand and sell this knowledge to utility companies to help them with their infrastructure rollout.”

Volta now has 1,200 chargers across the US, with 4,000 in the backlog awaiting installation. “We hope to complete the US footprint in 2020,” says Wendel. The company has contracts with the top three grocery store chains in America, and three quarters of the largest US real estate owners. Volta doesn’t try to replace petrol stations, but looks at the top markets for advertising, which also happen to overlap with early EV adoption. At night, as an additional revenue stream, Volta also aims to make its chargers available to fleet owners, so for example Federal Express vehicles could use them for overnight charging when the facility isn’t being frequented by customers.

None of Volta’s chargers can be found in traditional fuel stops, however. “We don’t believe the gas station model applies to EV charging,” argues Wendel. The key ethos of Volta’s strategy is “fuel where I drive, not go to fuel”. Although Volta’s chargers are only free for the first 30 minutes, after which an offset is applied, with power ratings up to 150kW on its installations, that’s going to be enough for a reasonable number of miles. The chargers are at least what is called “Level 2” in America, which means 240V rather than 120V, and up to 72A, so deliver at least 7.7kW. For most EVs, 7.7kW should be enough for around 30 miles of range per hour, which is likely to make the travel costs essentially free for the customer.

At the time of writing, Volta is focused on the USA, but has definite plans to expand into Europe and Asia, although this was put on hold by the Coronavirus pandemic. It has partnerships already for this, including with Schneider Electric and idinvest in Europe and SK in Asia. Volta will begin its European rollout in France but hopes to add the UK and Germany in 2021. Wendel expects the EV market to explode over the next couple of years, mostly due to rapid advancement of battery technology. “Batteries will expand to a 300-500-mile range, and car prices drop to below ICE in 24-36 months. GM is accelerating EVs, VW is accelerating EVs. VW is going to dominate. They pivoted hard because they got caught cheating with diesel and had to make a big change.”

The UK will be a bit more of a challenge for Volta because the idea isn’t entirely unique here. Podpoint has rolled out advertisement-hosting chargers at Tesco’s stores in partnership with VW that are also free to use, although these are mostly 7kW with just a smattering of 50kW rapid chargers. Rather than negating Volta’s strategy, however, this validates it. Although EVs are cars, the way we use them is subtly different to the ICE vehicles that they are replacing. Instead of you going somewhere to refuel, the electric refuelling needs to be located where you naturally go anyway and stay for an extended period. Volta’s model seems to fit this much better than trying to convert petrol stations to charging banks, and the 30 minutes of free power further incentivises people to make the switch to EVs. We hope the company’s charging stations make it over to the UK soon.