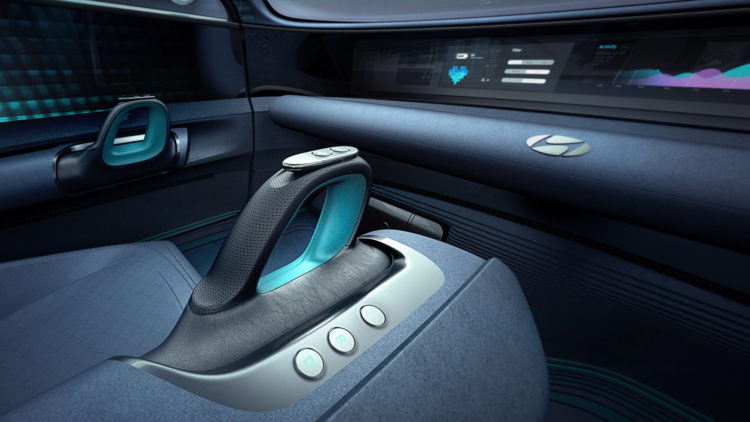 Hyundai executives unveiled the ‘Prophecy’ concept in a video presentation that centred on expanding the company’s idea of ‘Optimistic Futurism’ – an emotional link between humans and automobiles. They gave us a look at the Prophecy’s design features as well as Hyundai’s future electrification strategy. WhichEV checks out the most revolutionary updates.

The Prophecy is operated by a joystick in either the centre console or on the door trim, opening up the interior to provide customers what the company calls, “a warm welcome in a space of refinement“. The vehicle can also operate autonomously while the driver-side seat reclines and the driver is fed content from a screen on the dashboard.

The sleek design is said to resemble a “perfectly weathered stone” and sees a single curve on the sides run from the front to the back. Meanwhile, a longer wheelbase and shorter overhang give the car a unique look and open up yet more space inside. Side doors are equipped with air-intakes and circulate purified air inside the vehicle before releasing it back into the atmosphere.

This builds on last year’s ‘45’ concept EV which saw Hyundai favour minimalist design features as well as pixelated progressive lighting technology which are both set to be mainstays of their EV line moving forward.

Hyundai’s Prophecy concept comes as the Seoul-based auto-giant gears up for the future of EV development. They expect to sell more than 670,000 battery and fuel cell electric vehicles annually by 2025 and will invest close to €50 billion into future-technologies research and development.

Like Citroen, Hyundai is option for a transition to electrification that allows the customer to pick a model and then choose a powerplant. For example, the same Ioniq chassis rolls down the line to have a petrol, hybrid or electric powerplant fitted. In Europe, more than 75% of Hyundai's line-up will be electrified by the end of 2020 and the company hopes to supply almost 80,000 zero-emission vehicles to European consumers this year.

SangYup Lee, Head of Hyundai Global Design Center, said, “We have brought to life yet another icon that establishes a new standard for the EV segment as well as pushing Hyundai’s design vision to even broader horizons”.

The Hyundai Prophecy manages to look futuristic, even among a crowded field of visionary concept cars. We couldn't help wondering if someone on the design team had owned a Motorola Pebl phone back in 2005. Joystick control will certainly earn big points with the millennial crowd, while leaving the rest of us wondering how much of a future the classic steering wheel has in the car of tomorrow?