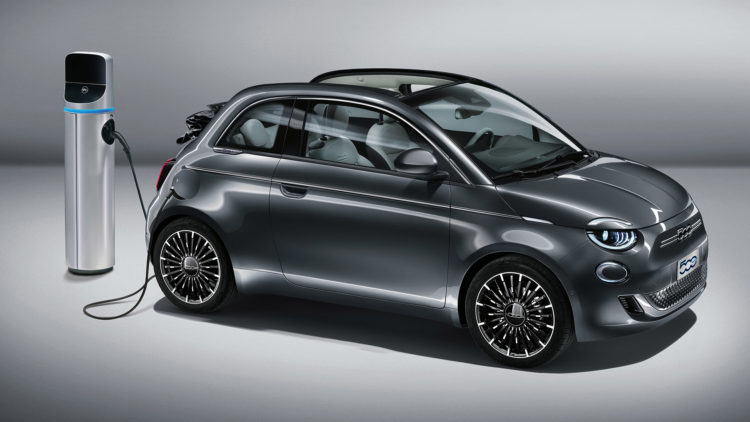 Positioned as the world's first all electric city car with level 2 autonomous driving capability, the new Fiat 500 will play a classic Italian melody when driving slowly through the city, to help warn pedestrians of its silent approach. Fiat Brand President Olivier Francois invited media to join an online briefing about the on the 2020 version of this classic design. Speaking from Piazza del Duomo in Milan, Francois introduce not only the launch version ‘La Prima', but also three limited editions designed by none other than Armani, Kartell and Bulgari. Based on the images and tech specs alone, WhichEV finds the romantic pull of the 500e hard to resist.

Accelerating away from the lights, the Fiat 500e is a cute looking convertible that will hit 30mph in 3 seconds and 60mph in 9 seconds – on its way to a (self-limited) top speed of 93mph, all courtesy of an 87kW motor. The 32kWh battery pack gives it a range of just under 200 miles and it can hit 80% on a fast charger in just 35 minutes.

There's clearly a lot of Ai built into this car. Once in the driver's seat, you can choose from normal driving mode, Range or Sherpa.

Range makes the Fiat 500e work like a bumper car, with a single pedal for acceleration and braking. We're going to take a wild guess and say that this won't be suitable for those with inner ear balance issues.

Sherpa mode controls your entire experience, in order to maximise efficiency – the way an expert Himalayan Sherpa would control the ascent rate on a long climb. Your top speed will be limited to 50mph, luxury extras like climate mode and the heated seats are switched off and the accelerator will take your foot pressure as ‘guidance', easing your speed up and down, so as not to put too much pressure on the battery.

The launch edition of the New 500 comes complete with an Easy Wallbox, a home charging system that can be plugged into a normal home socket. ENGIE EPS developed this solution exclusively for FCA and it can be managed via Bluetooth. You can re-fill at home, pulling 3kW from the wall and there's no need for professional installation.

The Easy Wallbox can be upgraded to a 7.4kW unit which will give you a full charge in around six hours. The New 500 also comes with a Mode 3 cable for charging at up to 11kW from a public charge point.

City cars of the future need to offer more than an electric motor and a range of gadgets. The Fiat 500e is the first car in its segment to offer level 2 autonomous driving, bringing all the associated benefits to urban mobility, including:-

FCA's brand new in car entertainment system, UConnect 5, is compatible with Apple CarPlay and Android Auto operating systems and can be used in wireless mode. It also tracks the car in case of theft and can help authorities locate the criminals who took your four-wheeled pride and joy.

Following last year's decision to centre its electrification plans in Northern Italy, Fiat has wasted no time in putting demand onto its new €50m battery plant.  That investment was quickly followed up by a decision to completely re-modernise the 80 year old plant at Mirafiori. This time €800m was allocated to the task of creating an advanced production line with the very latest in robot-led production systems. As well as the Fiat 500e, these lines will shortly produce the new electric Maseratis: GranTurismo and GranCabrio.

The basic Fiat 500e itself already looks like a head-turner. That's before you get to three very special versions, one each from Bulgari, Armani and Kartell. These one-off custom designs will be auctioned for charity, and we're guessing that the price will be a little higher than the £29,000 that Fiat is expecting to charge for the ‘La Prima' model.