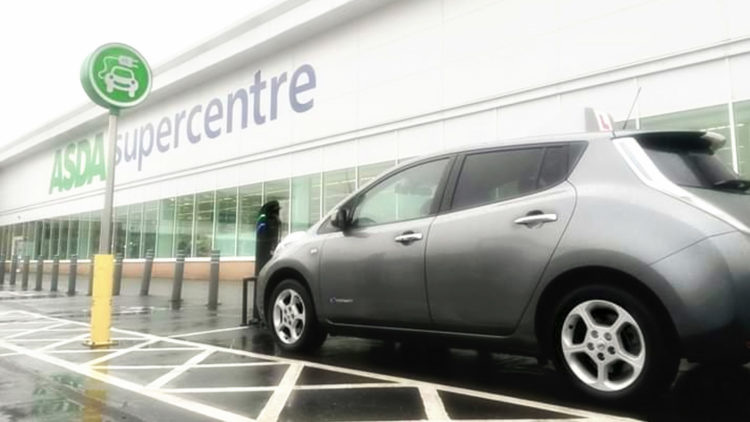 The number of charging stations for electric vehicles (EVs) has doubled in just two years which means over 600 supermarkets in the UK now offer plug-ins for electric and hybrid vehicles. A study by Zap-Map, an EV charging station mapper, and the RAC found that more than 5 per cent of supermarkets now offer EV charging facilities, while many have no car park at all leaving the true proportion far higher. WhichEV checks the numbers.

Customers spend an average of 45 minutes in supermarkets, making them the perfect place to ‘graze’ charge. Nine in ten EV drivers look for a charge point when selecting parking, according to the most recent Zap-Map EV Charging Survey. To help attract business, major supermarkets like Tesco and Sainsbury’s are offering EV charging for free.

Zap-Map co-founder Melanie Shufflebotham said, “It is very encouraging to see supermarkets increasingly embracing electric vehicle charging at their stores with a dramatic shift in the number of chargers being installed over the course of the last two years”.

Zap-Maps now works with Google Assistant, so it should be even easier to find a good place to re-fill your batteries.

Asda and Morrisons have the highest proportion of stores with charge points, with as many as one in five locations offering customers top-ups. Only one in twenty Tesco stores has charging facilities due to its prominence in city and town centres, but the ‘every little helps’ outlet has the most total stores with chargers at 142.

An RAC spokesperson said that booming growth in charge points could spur more drivers to enter the EV market and that a switch in focus from trickle to rapid-charger installation would help attract those without access to personal charger at home.

“It is extremely positive to see the supermarkets making it easy for drivers to go electric. Having more chargers that are readily available will help to speed up the transition from petrol and diesel cars to electric ones”, said the RAC spokesperson.

“The introduction of more rapid chargers at supermarkets may even stimulate take-up now, as it would make EVs viable for those who cannot charge at home because of where they live”, they added.

Morrisons leads the way in rapid charge technology with 84 units rolled out across its stores, almost double its closest rival, Lidl. With only 48 and 16 units respectively, Lidl and Co-op are the least prepared to give their customers a rapid charge.

The RAC confirmed that the number of drivers considering going electric has doubled in the past year and sits at 6 per cent. We will soon be looking at a future where millions of drivers are looking to pure battery powered vehicles when choosing their next car.

New car sales figures also revealed that three times as many all-electric vehicles were registered in January 2020 as there were in January 2019. Positive news indeed.

We all have to consider the same question: If you were to buy an electric car tomorrow, would you change your shopping habits in order to get free, fast charging?  You can access Zap Maps Live to see where your nearest charging stations are located.