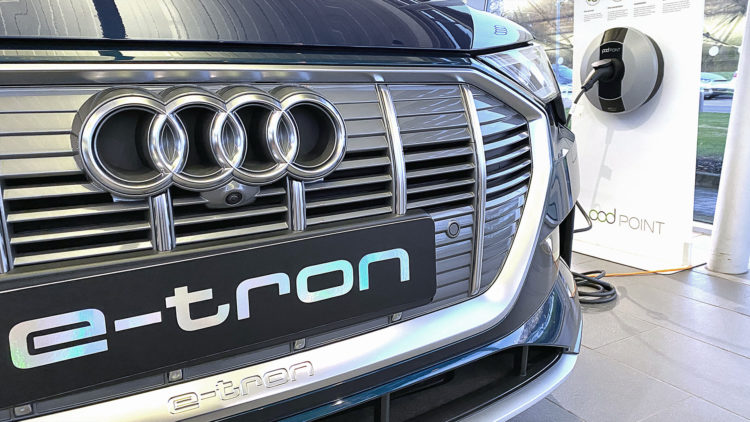 We've been hearing for some time that Audi was moving its roadmap around in preparation to bring forward several new launches. Whenever a major manufacturer (in any market), decides to make a move like that, it's only a matter of time before bargains start to flow in to the sales channel. Packed with features and a plush interior, WhichEV wonders just how low can Audi go on deals for a car that has an on-the-road price of close to £60,000?

The Audi e-tron is an all electric SUV with a 71kWh battery and a decent range. It will hit 60mph in just over 6.5 seconds and tops out close to 120mph. Internally, it comes with multi-zone air conditioning, heated front seats and the MMI Navigation Plus infotainment system that's widely acknowledged as one of the best in the market.

We visited Audi as part of our recent undercover investigation into whether or not main dealers were prepared for the transition to an electric future. While the staff had limited knowledge, there's no doubt that the Audi e-tron was the most comfortable car we sat in all day.

What put us off, apart from the lack of interest from the staff, was the price tag. The question becomes, “At what point would the e-tron look like good value?”.  At the time we checked it out, a business lease on the Audi was just under £400 a month. Not terrible, but not cheap.

We spoke with Mark Ferris from Select Vehicle Lease and he told us, “We've had big drops on all of the e-tron models, and these deals will be on offer to the end of March”.

“We're seeing the Audi E-Tron 50 SUV Quattro down at £300 a month for a two year lease. The specific terms will vary, but that's the kind of price point where you'd normally expect to find a Kia Niro or Peugeot 2008“, he explained.

In terms of pure performance, we all know that Tesla has the edge over the German manufacturers. What Tesla can't match (and, indeed, will probably never try to match), is the interior comfort level of the high-end brands.

Where the Tesla interior is deliberately open and spacious, cars like the Audi e-tron are designed to make you feel like a pilot at the controls of an advanced form of transport.

Before choosing any car, you need to drive it first. Booking a test drive with Audi is easy enough and you can do so on their site. In the meantime, here's a gallery to give you a better idea of what the e-tron looks like up close and personal.

If you want the details on this £300 a month business lease, you can find our more here.