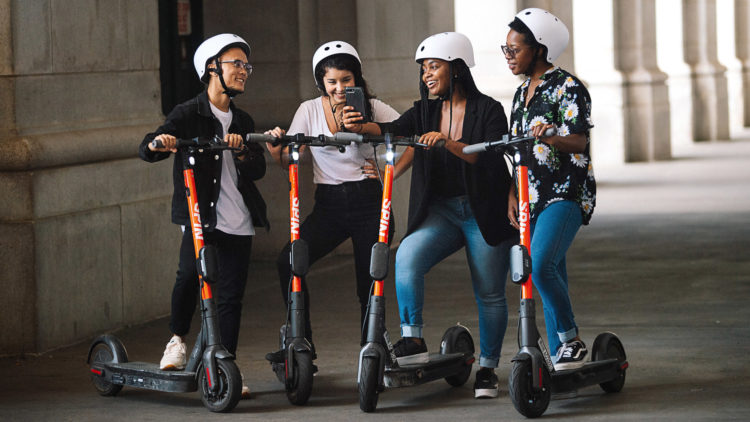 Owned by Ford, Spin is an e-scooter company that you may not have heard of. It's aiming to be a pioneer in the market over the coming years, starting with the launch of its first fleet of e-scooters in Cologne this month. Given that the city is home to Ford's German headquarters, the choice of location seems prudent. If successful, Spin intends to expand across Germany and consider a plan for the UK, while applying for the necessary permits to operate in Paris. WhichEV checks out the latest electrified competitor in the rapidly growing, two-wheeled powered-vehicle sharing market.

These powered e-scooters are currently illegal to ride publicly in the UK, but rival ‘micro-mobility’ app Bird has been allowed to run a trial. Bird has made e-scooters available to rent in Queen Elizabeth Olympic Park and there are hopes that a Government consultation will lead to the legalisation of ‘micro-mobility’ transport options for public use. Spin is hoping to participate in future e-scooter trials in the UK, as well as gaining market share by participating in private partnerships.

“Last year, we increased the number of U.S. cities in which we operate by 600 percent. We look forward to working collaboratively with cities and universities throughout Europe to bring the joyful, safe, and seamless Spin experience to the international community”, said Euwyn Poon, co-founder and president of Spin.

The company has over 600 employees worldwide and has begun hiring in Germany for corporate and fleet operation positions. In December, The Telegraph reported Spin were hiring staff in London, Liverpool, Birmingham, and Manchester as part of plans to ‘flood' European cities with e-scooters.

E-scooters have received mixed feedback in Europe. User enthusiasm has made room for more than 15,000 rental scooters on the streets of Paris and as many as 40,000 in Cologne. There have been accidents, including that of the high-profile YouTube star Emily Hartridge, who was killed when she collided with a lorry while riding on the road in south west London.

There has been a lot of criticism, but you have to question whether e-scooters are actually more dangerous that bicycles.

When we tried Lime in Berlin last year, we found the e-scooters easy to hire and fun to ride. That said, we were constantly aware that coming off at 20km/h with no protection would be ‘fun'.

Co-Founder and CEO at Spin, Derrick Ko said: “As the company that created the first policy framework for regulating stationless micromobility, we look forward to collaborating with our constituents in Europe to shape the future of this industry”.

“We are looking forward to expanding our services to Europe where cities are committed to making sustainable, safe, and people-centered transportation options work through regulatory frameworks and infrastructure investments“, he added.

Ko's company has already operated more than 1 million rides in 62 cities across the States and has drafted its own guide to e-scooter safety.

Spin says that it has a firm commitment to safe development and considers it a central part of its corporate culture. The company has provided a 30% discount on foldable helmets, empowers staff to report internal safety/legal issues to a ‘safety lead' for immediate review and has policies in place to ensure riders both ride and park their e-scooters safely.

As part of its commitment to keep riders safe, Spin is also partnering with community groups to support the development of safe streets and protected lanes.

With London committing to reduce inner-city speed limits for cars down to 20mph alongside the constant evolution of electric vehicles, we urgently need governments across the world to re-evaluate the rules that govern personal mobility. If for no other reason than we need to give manufacturers a common set of safety goals to aim for. The more uniform and logical the rules, the smoother and more cost-effective the transition will be.

Can the i4 save BMW?