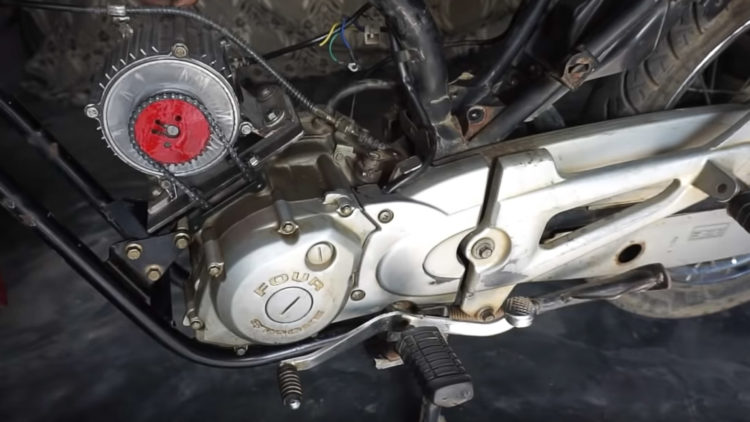 Although it may be completely obvious, we're going to say right up front that this kind of project should not be attempted without serious engineering knowledge and experience. Also, every country will have it's own legal framework for powered vehicles (of any kind) being used on public roads. That said, anyone who's travelled around the East will know about the kind of pollution that mopeds and motorcycles generate (in countries where sunshine is often plentiful), which makes the idea of solar-powered, short-range, eco-friendly transport very appealing. With entertainment in mind, it's well worth checking out Technical Partha's conversion video.

The starting point is an old Yamaha petrol-engined motorbike, which is broken down and has all of its fossil fuel related components taken away. While not exactly a technical manual in how to achieve the breakdown/refit, the video is well shot and spends plenty of time on the drive chain and the components that you will have to custom-make in order for the conversion to work.

Motors like the one used in the video will typically cost less than £100 – possibly less if purchased from discount online shopping stores like Alibaba and certainly less secondhand.

The ‘Hot Rod Red' cog definitely made us smile – was it really Tony Stark with the wrenches?

One thing that's definitely different from most electric vehicles you will see in the West, was the gearing. The bike's gears seem to have been left in place – the motor was simply switched from petrol to electricity. Outside the Porsche Taycan, you'd be hard pressed to find a gear change on a modern consumer EV.

How could you improve it this budget bike? The battery and its mounting could definitely be looked at but – apart from that – the bike seems functional and makes you wonder how much such a conversion would cost from a local specialist?

The video is interesting and certainly gets you thinking. Well played Technical Partha for putting it together!