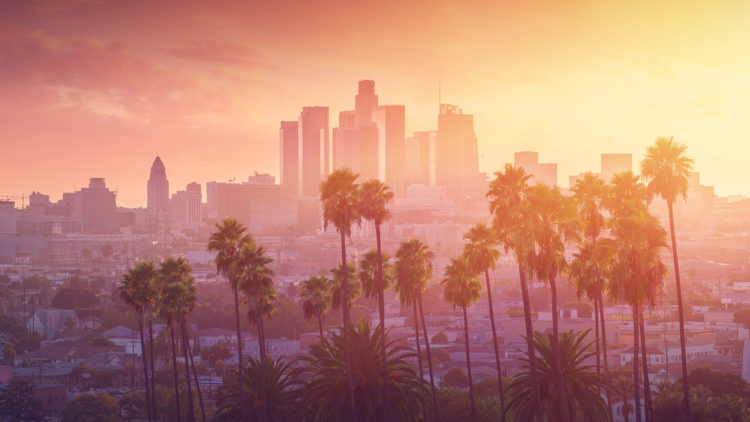 As the European Union begins to enforce some pretty stern limits on the amount of CO2 that a car manufacturer is allowed to expel from the exhausts of new cars, Eric Garcetti (Mayor of Los Angeles) is looking to implement a similar set of ‘Carbon Neutral by 2050' policies for LA. Ride sharing services like Uber and Lyft could be among his first targets. WhichEV looks at the numbers and the kind of policy-shift we can see from one of the world's most famous polluters.

The poor air quality over Los Angeles has famously created some of the most beautiful sunsets in the world. However, recent studies by the University of Southern California and others have shown a direct link between air quality and the health of children – specifically with incidents of asthma dropping whenever air quality controls were improved. Given a choice between more colourful sunsets and healthier children, it's easy to see why Mayor Garcetti is looking at new legal limitations on pollution.

Alongside improving the grid and preparing for a surge in electric vehicle purchases, Mayor Garcetti is also looking to draw 80% of the city's power from renewable sources within 15 years. His plans include electric buses and America's first electric fire engines.

His move toward cabs and ride sharing begins with collecting more data about the drivers and their parent companies. Uber has traditionally be shy of giving out exact data about its driver numbers. That said, in 2017, one of its people did indicate that over 12,000 Uber drivers were operating in LA and that another 15,000 were to be recruited. You could estimate that up to 50,000 vehicles are being used on a regular basis to provide various independent taxi services for the metropolis.

Using a legal framework to move 50,000 petrol/diesel cars off the road every day, in order to replace them with emission-free electric cars (recharged from renewable sources), could have a significant impact on air quality.

Clearly embarrassed by his country's decision to pull away from the various pollution-reduction accords across the globe, Mayor Garcetti is not shy about how he feels the city should proceed.

“We make laws, we make business deals, we create jobs, we have to clean air and water, we run ports and airports, we attract investment and we often finance infrastructure. Cities will either succeed in saving this planet, or cities will fail, and I intend that it be the former”, he stated.

“Local actors, no matter who is in power, are the most critical elements of whether or not we win the fight against climate change”, said Garcetti. “It is local governments and regional governments that regulate or directly control building codes, transportation networks, and electricity generation, which together are 80 per cent of our emissions”.

Mayor Garcetti is working with 40 of the world's largest cities to help shape the future of all city residents. Indeed, he has just taken over the chair of the C40 and intends to roll out an aggressive series of steps to move the planet forward in a positive way.

If you want to learn more about the key issues affecting cities, then the C40 has set up a knowledge hub, which we encourage you to visit.

In 2014, Garcetti helped found Climate Mayors – bringing together 427 cities across the USA into a group dedicated to improving the national climate. This group is taking its lead from Europe and will look to implement policies in harmony with the Paris Agreement and against US central government's seeming indifference to the need for a coordinated effort to save the planet.

Photojournalist with a broad range of experience dating back over two decades.