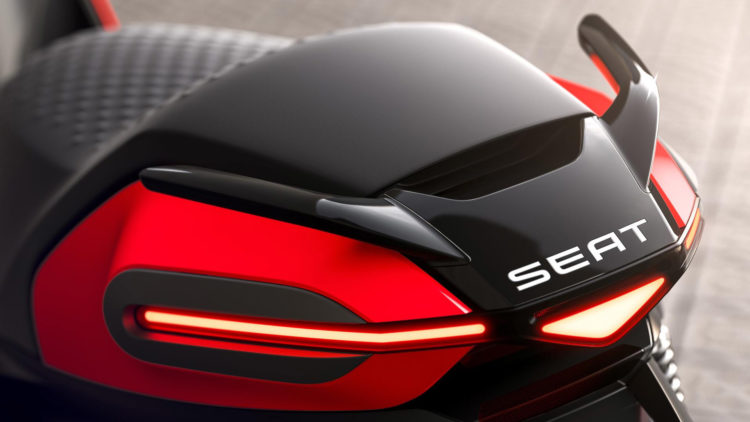 Anyone who's taken a summer holiday on the Spanish coast with their friends, is likely to have hired a moped. They are great for exploring new beaches by day and local towns by night. In the major cities, small motorcycles perform another function – allowing workers to zip through solid traffic along their chosen route. Not surprising that Seat is aiming to unveil a 100% electric bike this month. WhichEV scoots over the salient claims and details.

Back in March, Seat's design boss Alejandro Mesonero, announced that production on the Seat Minimó would begin in 2021. This covered, two seat concept car featured gull-wing doors, hot swap battery technology and 17″ wheels. Judging from its long-term relationship with a certain 1.9 litre diesel engine, the VW Group seems to enjoy seeing how far a single powerplant can be adapted. Which makes us wonder if the 15kWh battery pack and motor from the Minimó could have influenced the engine on the new Seat eScooter?

Seat is claiming ‘125cc petrol characteristics', but in the form of a 100% electric product. Some 125cc mopeds can cruise close to 50mph, while others and top out closer to 60mph. In terms of acceleration, a 0-60 of 9 to 12 seconds wouldn't be unusual, with a range of around 80-100 miles per tank and a price of just over £3,000. Some countries would set that up as a bike with two seats, others as a single seater product.

Another factor for Seat to consider when planning its sales targets for the eScooter, is the local laws that affect who can ride a two-wheeled motorised vehicle – and what kind of licence they need to do so. Here's an idea of how those rules work in the UK:-

Although limiting, if the eScooter ducks under the 30mph limit, it will open up a larger market.

The image released by Seat today, seems to show the rear of the bike with passenger handles. In the UK, you would need to have passed a test to take a pillion passenger.

Barcelona has the most motorbikes per capita in Europe, so the location for the unveiling makes sense.

At the recent Regent Street Motor Show, our Editor in Chief Chris Minasians took an electric Harley Davidson up to 80mph on a fixed rig in a little over three seconds. It was an impressive experience and we're sure that many more manufacturers will be launching electric products into the two-wheel market over the next couple of years.

For now, if the Seat eScooter can hit 30mph comfortably with a range of 80 miles and a price tag under £3,000, then it will certainly put the electric cat among the petrol pigeons.

Musk boosts Model 3 charging rate by up to 70%