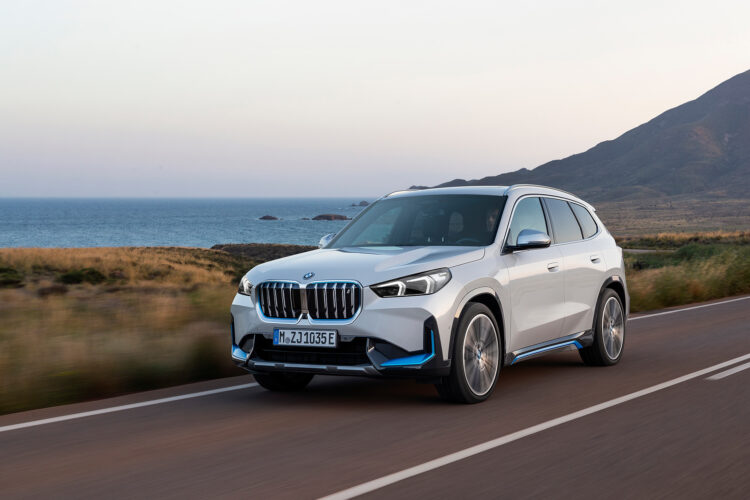 76 / 100 Overall
£55,655 inc VATPrice as Reviewed
Pros
Cons
Verdict
BMW extends its electric options with the iX1 small SUV. While the range is behind rivals and there are faster alternatives, the BMW driving experience is evident, with involving handling for this class of vehicle. Equipment and interior are up to BMW standards as well, making the iX1 a tempting quality proposition in its class.

BMW’s march towards electrification has continued with the launch of the iX1, coinciding with an overhaul of the X1 petrol model on which it’s based.

While not all fossil-fuelled cars translate easily into all-electric versions, BMW has already transplanted electric motors into its larger sibling, the iX3.

It is a recipe that has worked well there. So, we’re hopeful the iX1 will deliver more of the same, proving a worthy adversary to the likes of the Audi Q4 e-tron, the Tesla Model Y, the Mercedes-Benz EQA and the Volvo XC40 Recharge.

Although we’re expecting more models to come along soon, notably a two-wheel drive version, only one edition is being offered at launch: the xDrive30.

If you’re fluent in BMW lingo, you’ll know xDrive means four-wheel drive. So that entails a couple of electric motors, one driving the front wheels and one driving the rears. 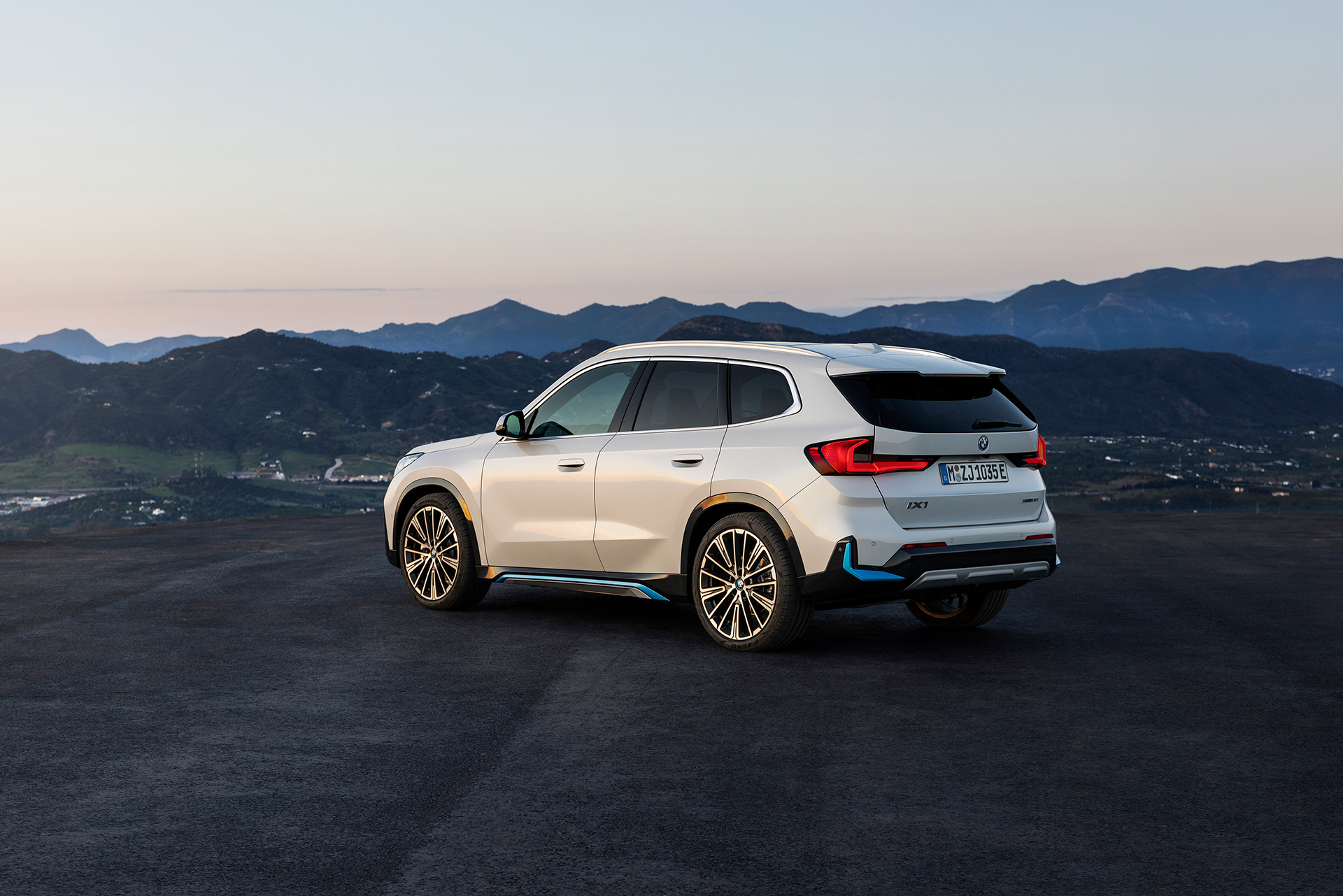 The result is a mightily impressive 313PS.

While that may sound steep, the headline price is a bit misleading because future variants yet to be released are likely to be cheaper.

When it comes to optional extras, the xLine trim can be upgraded to 19-inch alloys.

There is also a Comfort Pack, which electrifies the adjustable lumbar support and provides electric front seats with driver memory function, plus a heated steering wheel. 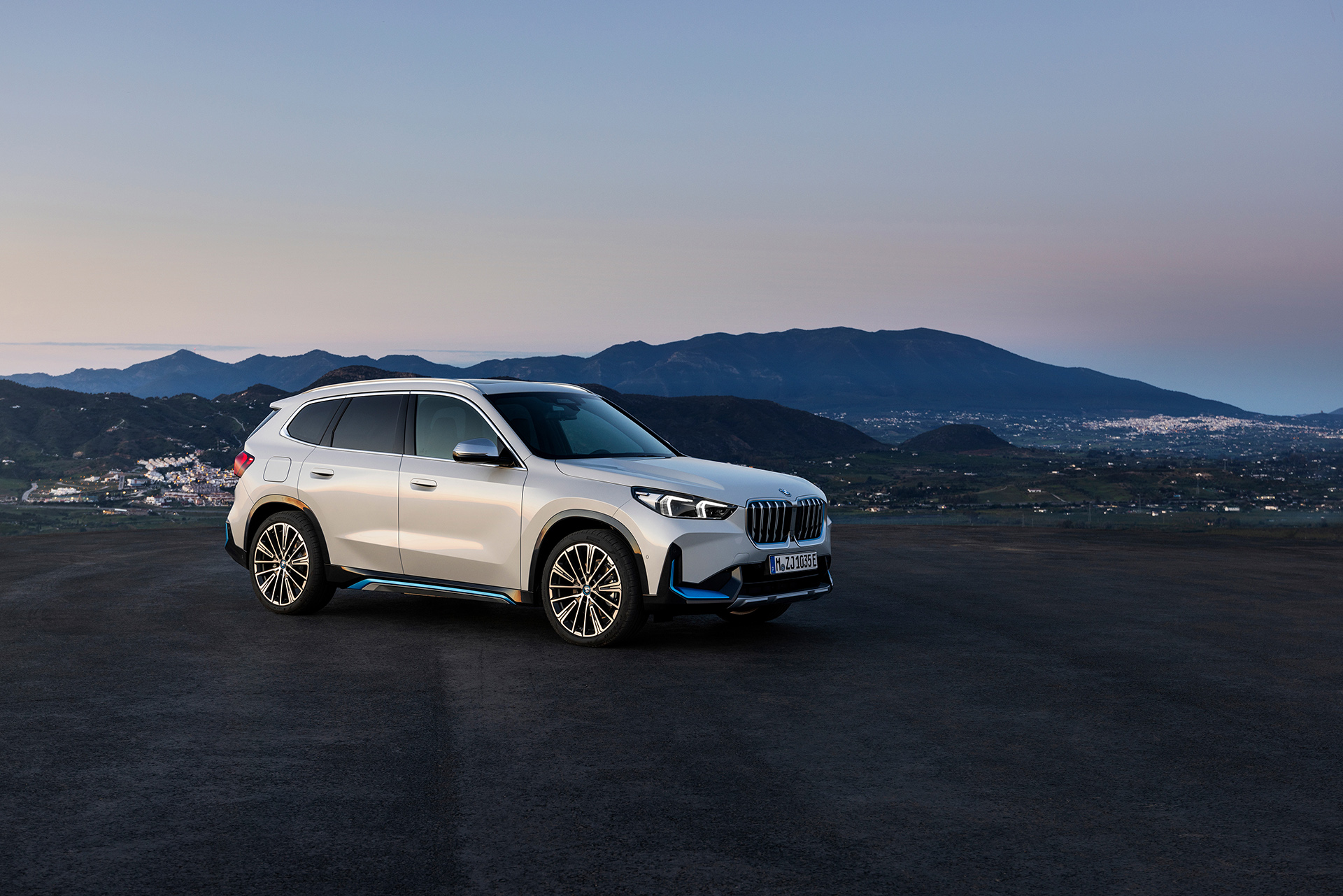 The Technology Pack we mentioned earlier is also available. Plus, BMW will sell you a 7kW wall box to charge the car more quickly at home.

The Technology Pack Plus adds a head-up display, live cockpit professional and parking assistant plus.

Various elements of the above packs are also available individually. Meanwhile, other optional extras include everything from a panoramic glass sunroof and Harmon Kardon premium audio system to towbars and luggage nets.

Only some of these colours are available on the M Sport trim.

While some electric cars have alien-like, futuristic aesthetics, the BMW iX1 is virtually indistinguishable from the combustion-engined X1.

The kidney grilles remain, and although they're more prominent than before and closed off to reduce drag, they don’t take on the new thinned-out elongated form that has appeared on some of BMW's more recent models.

The front end presents itself with a mean frown, thanks to the pointing shape of the headlights. Meanwhile, the bodywork curves above a lower grille on the xLine trim, with aggressive air intakes at the sides and a more pronounced lower grille on the M Sport grade. 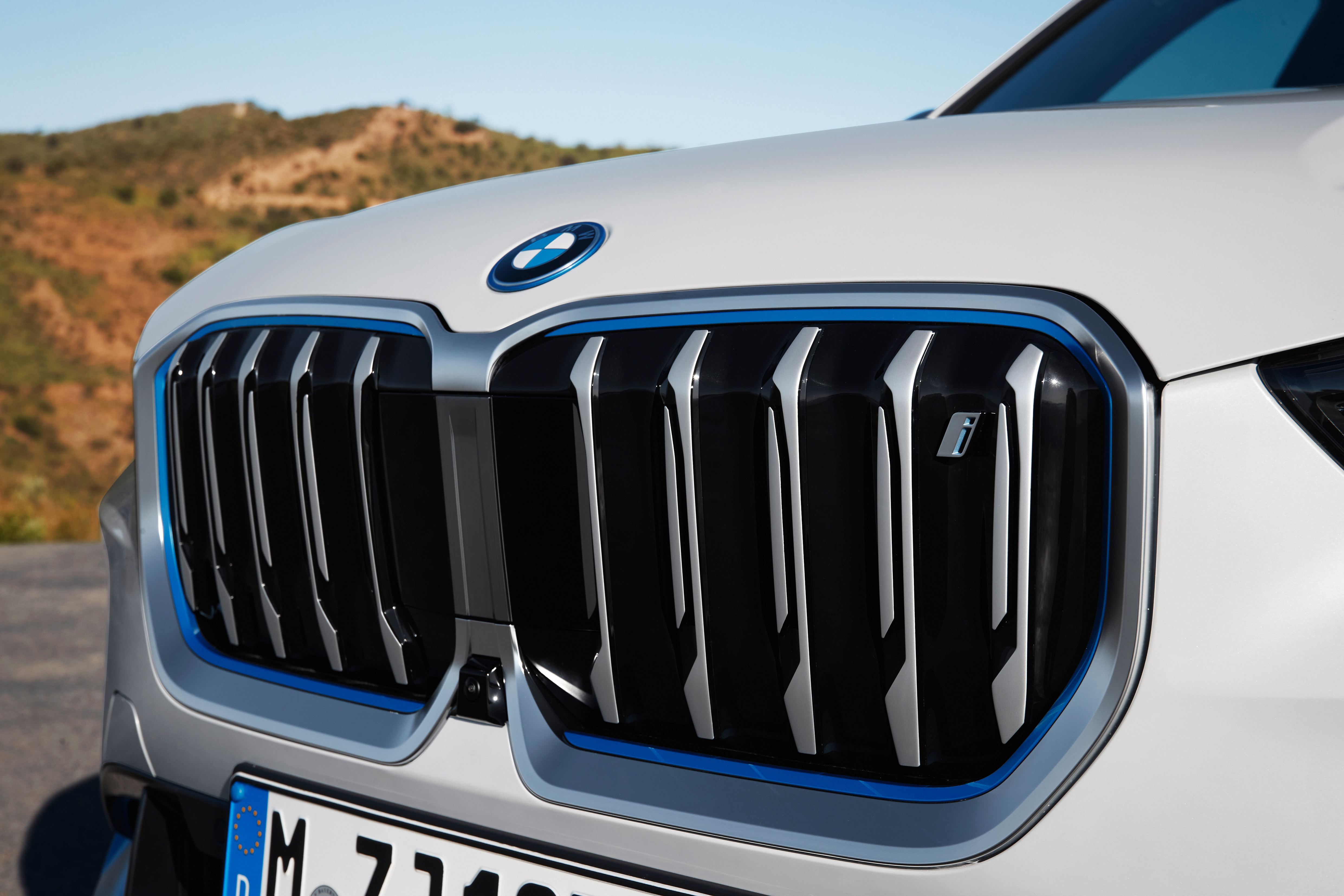 The sides of the xLine version feature dark cladding on the side skirts and wheel arches, although, on the M Sport version, these are painted in the car’s body colour.

At the rear, the M Sport model looks more hard-hitting, with a large, blackened area on the rear bumpers and a diffuser-shaped bottom, while the back of the xLine is more restrained.

The driver’s position is reasonably high up, while there’s a good level of adjustment in the seat and steering wheel.

There is also plenty of space up front, and even taller drivers won’t be short on headroom. At the same time, the long adjustment in the seat accommodates those with long legs.

The visibility is reasonably good out of the front, thanks to the high driving position. Although the angle of the rear windscreen makes the hindmost pillars thicker, parking sensors and a reversing camera negate the visibility problem.

In the rear, the available space impresses, too, for a compact crossover. Mind you, the Tesla Model Y offers even more room, and the floor is slightly raised, which limits under-thigh support for those sitting in the back.

You will easily fit two adults there, although a trio will likely be uncomfortable for all but the shortest of journeys.

You are not short of storage space inside the cabin either, with generously sized door bins and more beneath the centre console. On that subject, the centre console doesn’t extend fully forwards, so it doesn’t directly connect with the dashboard.

This feature creates a lot of usable space lower down, in front of where the centre console ends, providing space for two cupholders and the wireless phone charger in the M Sport model.

Overall, the interior quality is good, with plush surfaces, and although it lacks the outright luxuriousness of larger BMW models, it is inviting and very attractive.

It does feel like a step down from the bigger iX all-electric SUV, but then the iX is around 50 per cent more expensive than the iX1, so that’s understandable.

There are cheaper plastics, but they are largely hidden from view, and the interior looks well thought through, solid and well built, with buttons and controls laid out intuitively.

Cargo space is 490 litres with rear seats up, and 1,495 litres with them down. This is a bit more than most small estate cars, but not as much as some SUVs in this class.

The 10.7-inch touchscreen is impressive and ultra-responsive, with crisply clear graphics.

Of course, we expect to be impressed as BMW has long held the title for the industry’s leading infotainment system.

However, anyone who has used the iDrive system will be disappointed to find that the iX1 doesn’t come with its centrepiece rotary dial, although voice control is offered. 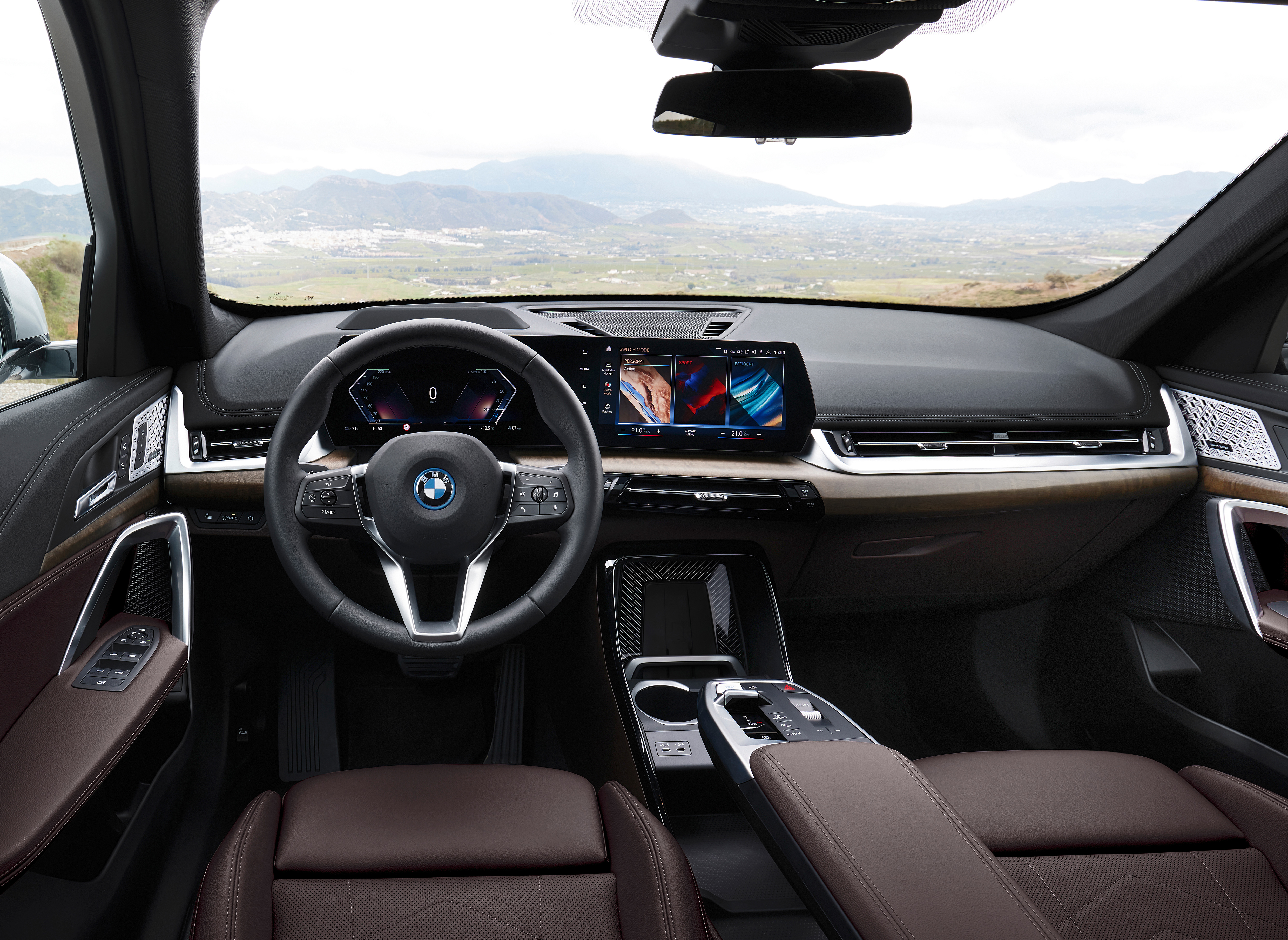 BMW argues that the dashboard is more accessible due to the driving position, so there’s no need for the dial.

We can see what the automaker means, but we suspect many current BMW drivers will disagree.

The voice control is better than in years gone by, but it isn’t spot on while having to prod the screen on the move is fiddly and inconvenient.

One clever feature is that if you choose the head-up display, it can provide SatNav directions in augmented reality, displaying them in front of you as you drive.

The impressive 313PS gets the Bimmer from 0-62mph in 5.6-seconds, which is good, although we should clarify that it’s only 313PS for ten seconds.

This is because you can use a paddle on the steering wheel, giving you an extra temporary ‘boost’ of around 45PS, but it adds to the fun.

What will also impress keener drivers is the torque delivery, which is instantaneous as soon as you press the accelerator, as with most EVs. 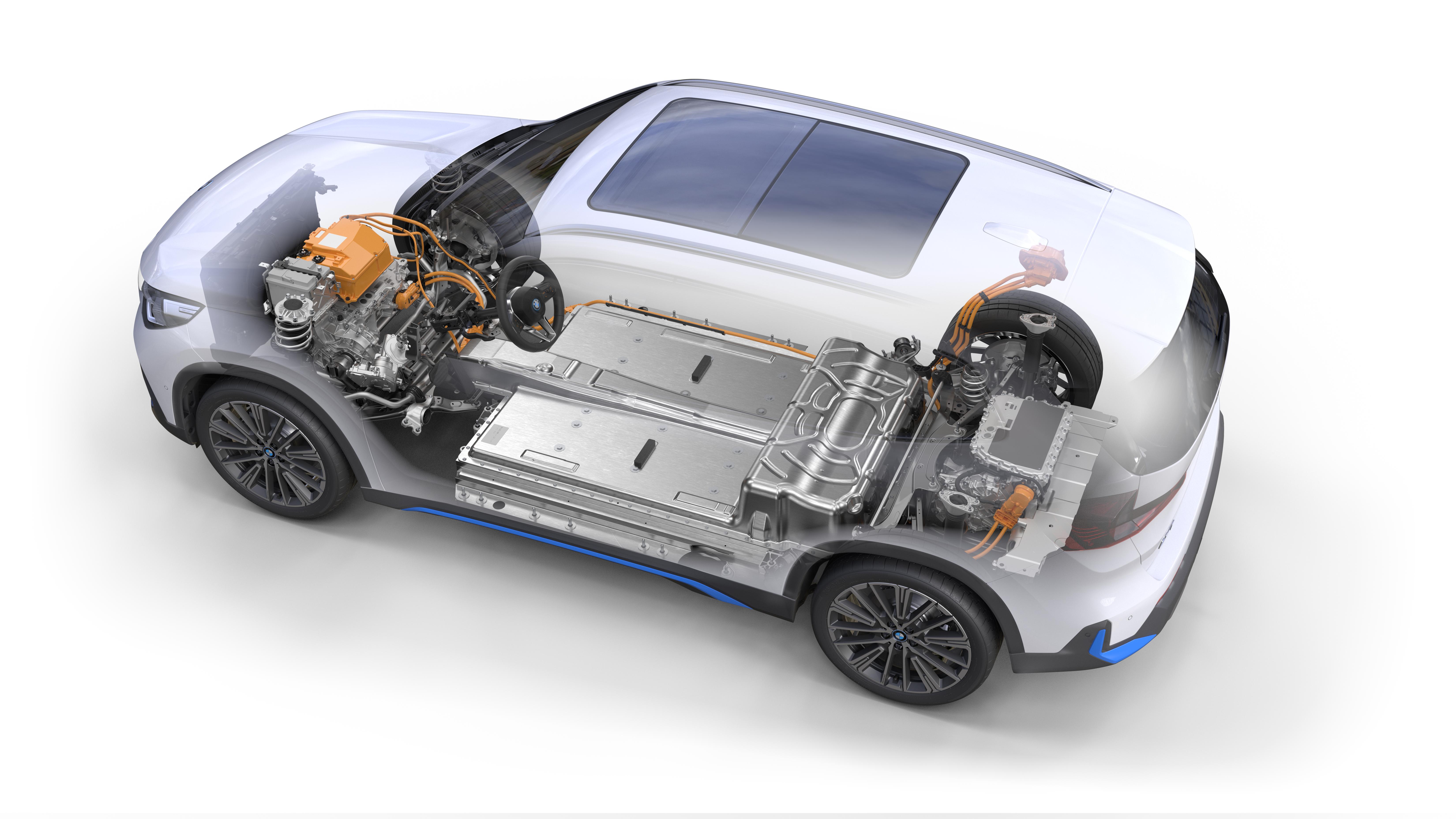 While the iX1 slower than the Volvo XC40 Recharge, it’s quicker than the Audi Q4 e-tron and the base Rear-Wheel Drive Tesla Model Y. However; the Model Y is available in a Performance version which will blitz the lot of them.

The all-new iX1 is good to drive and, compared with its challengers, seems to be the best of the lot. But if you’re an enthusiastic driver upgrading from a standard X1, that might be of little comfort, as the iX1 is noticeably heavier and feels less agile than its fossil-fuelled sibling.

Nevertheless, it zips about nicely, with a smooth ride that’s a good blend of comfort and the firmness you need in the suspension to allow for confident handling, biased slightly more towards the latter.

In any event, it’s helped by the adaptive suspension, which gives you the best of both worlds.

Around country lanes and villages, it feels at home, and, thanks to BMW's refinements, the miles on the straights seem effortless, thanks to the light steering.

Admittedly, the steering can lack feel and doesn’t firm up as much as we’d like in the bends. But there’s a plethora of grip, giving a stable and reassuring ride that gives you the confidence to push things in the corners. 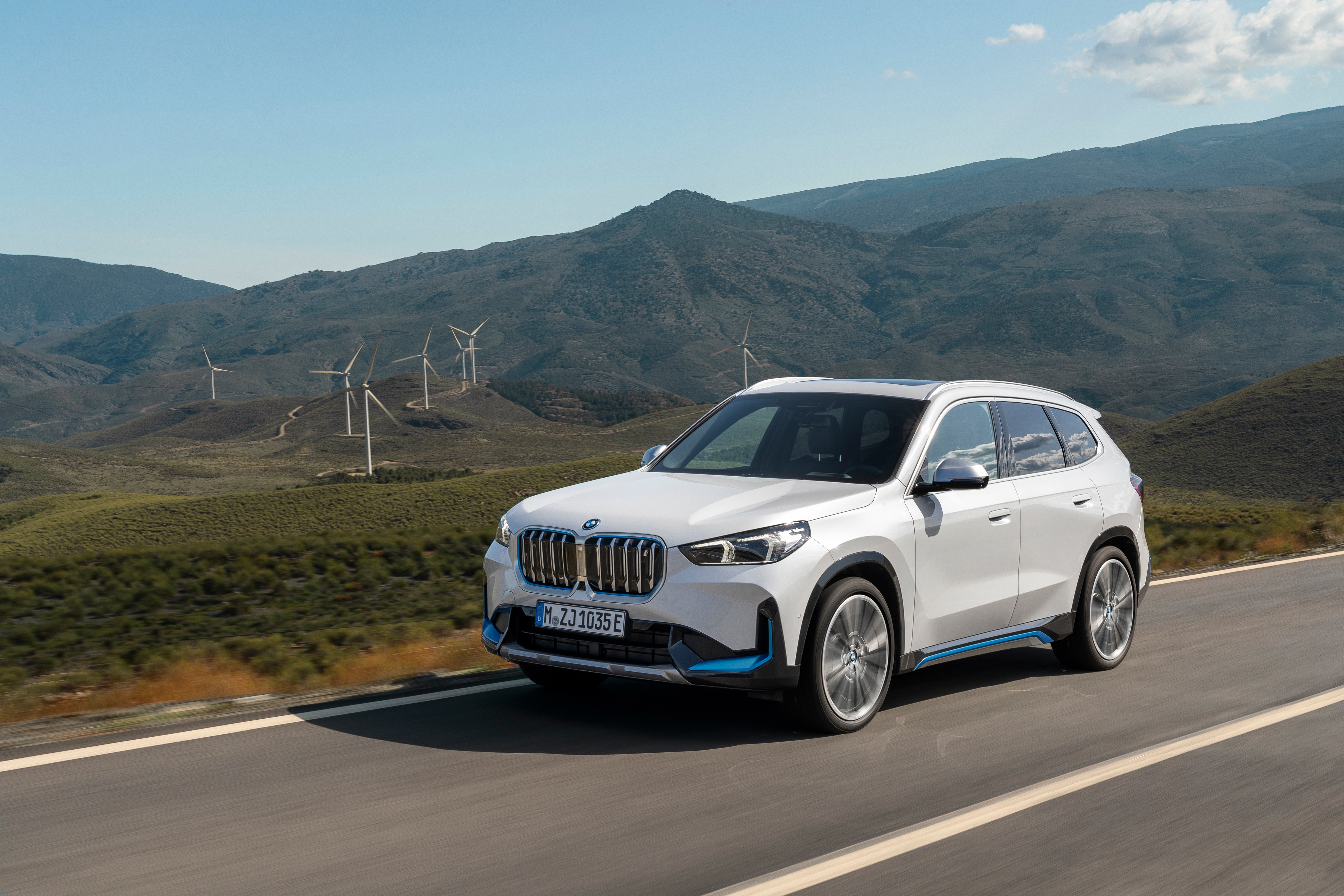 As you can imagine, though, there’s some body lean in the bends. But, given the weight and the fact it’s an SUV, it’s reasonably entertaining to drive on twistier B-roads, and the adaptive suspension limits the body roll as much as possible.

When throwing the iX1 into a bend, there’s a sense that the clever tech is having to adjust itself so often that the car can’t quite keep up with it. But then most folk will drive well within its limits, so they likely won't notice.

The model we drove was a prototype, so final tweaks may be made by BMW, although production models are only days away.

The BMW iX1 has a 64.7kWh battery that provides a claimed range of 270 miles.

You should expect less than this in the real world, though. The actual range you achieve will depend on many things, including the weather conditions, air temperature and driving style.

By comparison, most of the iX1’s foes can go further on a single charge, but not by a considerable amount – 10-20%. 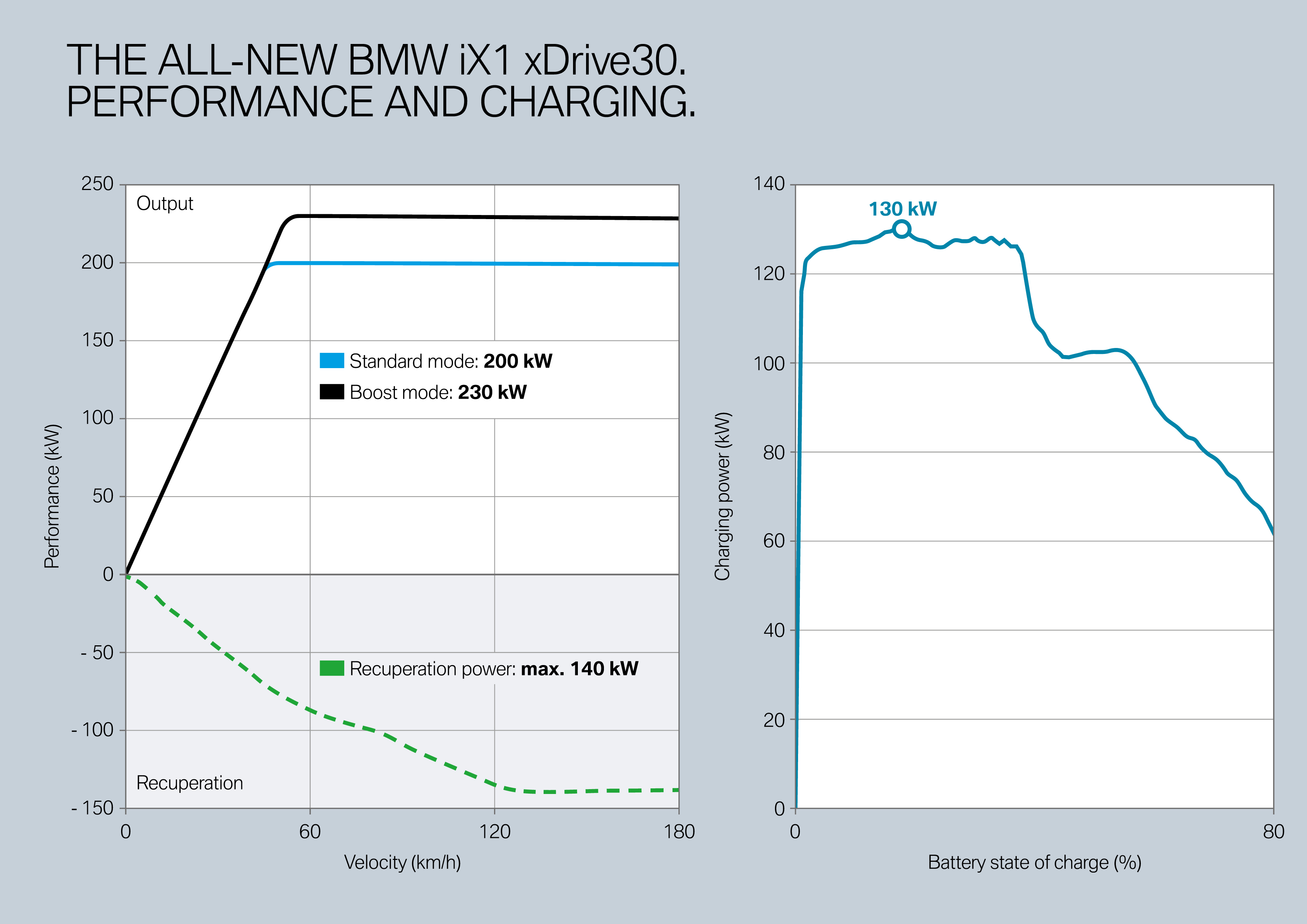 The iX1 can be charged at a maximum rate of 130kW, which is slower than most of its competitors, while the Model Y has exclusive access to Tesla’s Supercharger network.

One clever feature is that the charging can be controlled from a smartphone. And, if you’re planning on using the car, you can enter your estimated departure time so it can be charged up in time.

As with all electric vehicles on the market, there are no carbon emissions. So, for the time being, that means zero road tax to pay. It also places the iX1 in the bottom band for Benefit in Kind, making it an attractive future option for company car users.

Regarding reliability, BMW has a different reputation than it once did and is only ranked as average nowadays.As a result, it’s only backed up by a three-year warranty, although there’s no mileage limit on it. Meanwhile, the battery gets a separate eight-year, 100,000-mile guarantee.

BMW offers servicing plans, including one that you can pay for monthly to spread the cost, covering the car for up to four years through its Service Inclusive product. iX1 owners will be pleased to hear that it’s £15 a month for all ‘i’ models, compared with £20 a month for the standard X1, as electric cars are cheaper to maintain.

Crash testing experts at Euro NCAP haven’t yet tested the iX1. But the new X1 on which it’s based has been put through the wringer, earning a five-star rating. 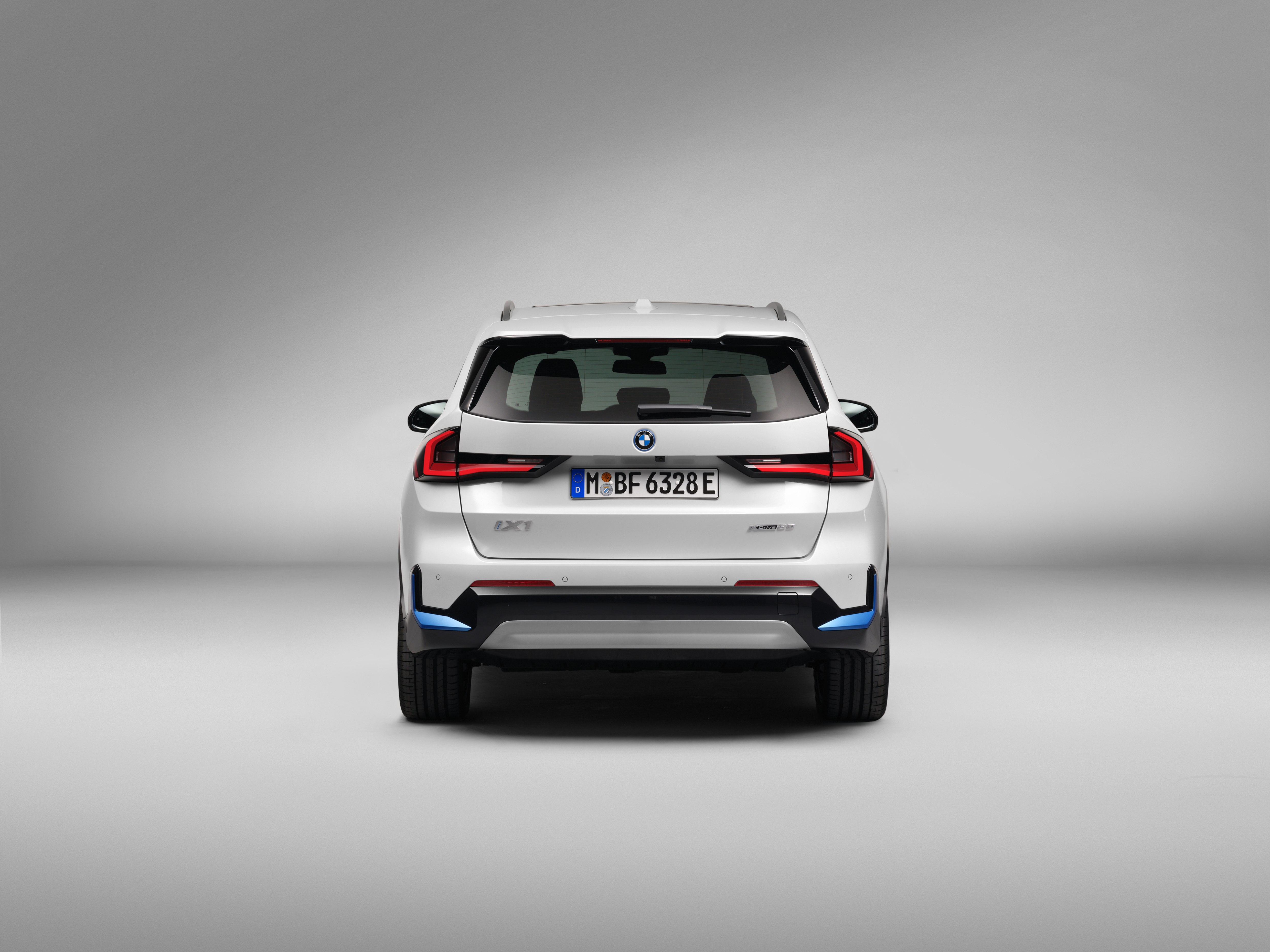 Extreme E: Countdown on to Season 2 championship decider in Uruguay

‘World’s most capable electric off-roader’ to be revealed today