Oxford-based Electrogenic was one of the companies we featured in our guide to electric classic car conversion about two years ago. It focuses on everyday driveable classics more than high-performance rarities, as we explained in our recent feature on the company. Recently, Electrogenic invited us to visit its premises and see some of the conversions as well as drive a couple of examples. We jumped at the chance.

Like many companies working in this area, Electrogenic started converting classics to electric so that they would used more regularly. As any classic owner will tell you, it’s a labour of love to drive a classic car. Sure, it has tons of character sorely lacking in modern cars. But you’re also never sure it will work when you need to go on a journey or might fail to go the full distance. This was the inspiration for Electrogenic’s business, but the company wanted to do more than bog standard conversions. 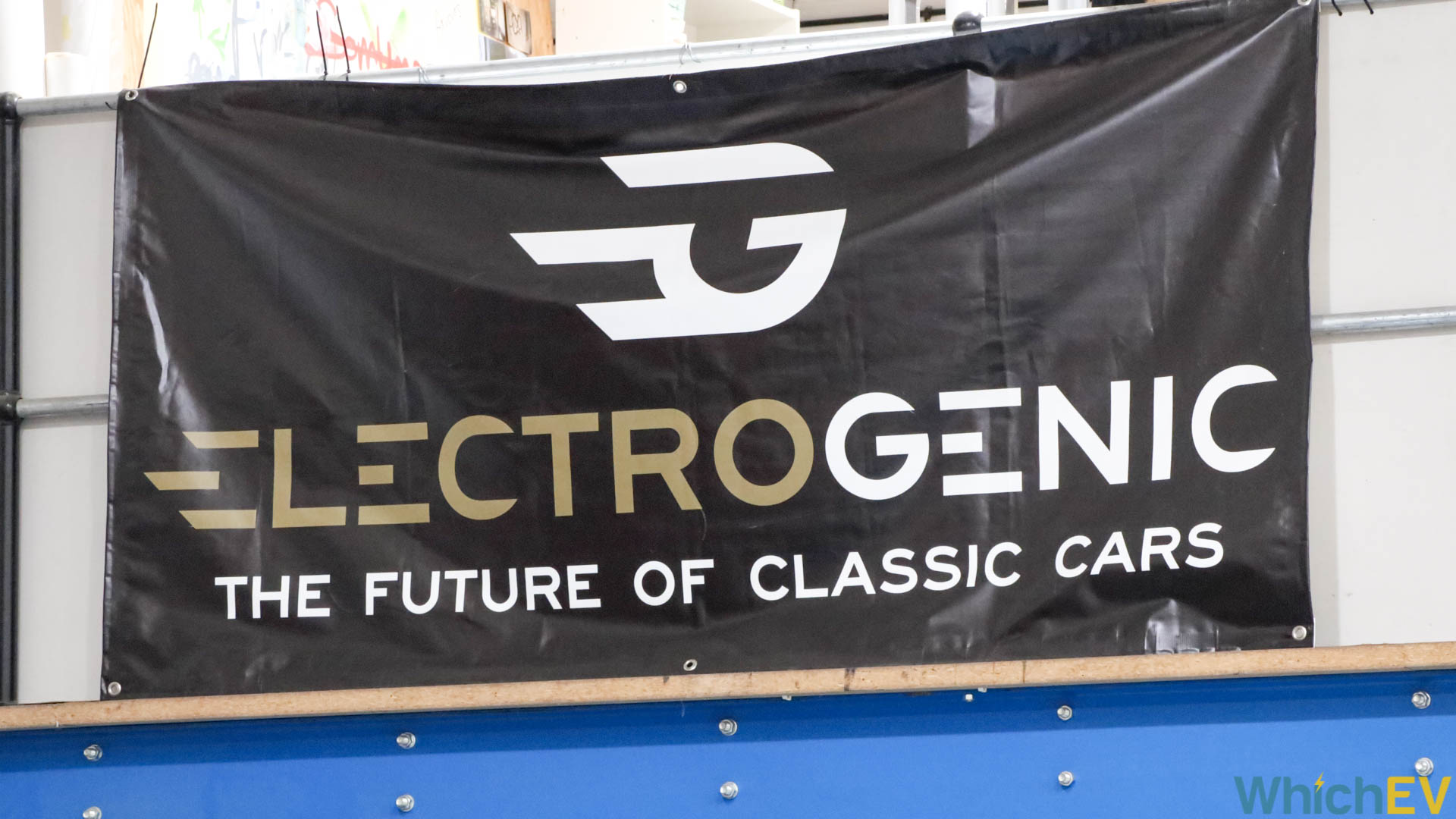 “We started to develop our own tech,” says Steve Drummond, Founder and Director of Electrogenic. “Now the tech development is really coming along and bringing us into new markets as well as classic cars.” Electrogenic has developed its own management systems including apps and circuitry to drive the instrumentation in the car. Drummond has also seen the market for EV conversions change. “We started off with individuals who were in their fifties and sixties and had had a car in the family for a long time. It needed a new lease of life, and they were conscious about the environment but also didn’t want to carry on having to do the maintenance with an old vehicle, because that's a significant part of owning a classic car.” 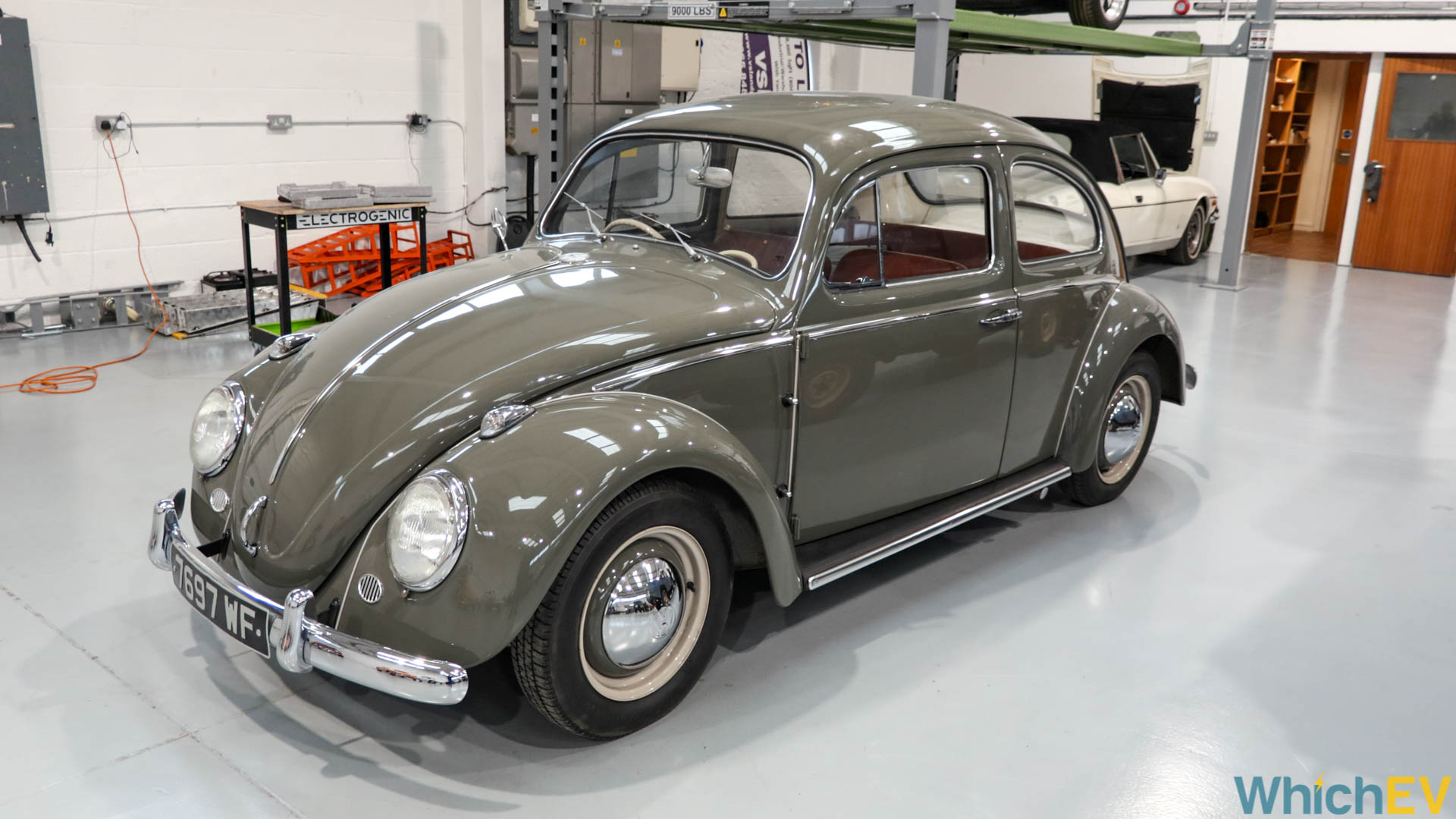 One of the first results of Electrogenic’s endeavours is a 1963 VW Beetle, which was in the workshop during our visit. This uses a NetGain HyPer 9 motor with 80kW (107hp) driving through the original gearbox, although this has been simplified to just third and fourth. Third is for city driving, fourth for the motorway. This car incorporates seven Tesla battery packs for a total of 37kWh, which provides a real-world range around 150 miles. AC charging is supported up to 15kW. Considering the reliability reputation of classic Beetles, this conversion has made the car a much more viable everyday driver. Where the original car took 28 seconds to reach 60mph, the conversion takes more like 7.5 seconds.

But Electrogenic is seeing its market change now. “Probably the biggest new group of customers is people in their thirties and forties who have a little bit of money and very often live in London,” says Drummond. “They have always wanted a classic car but don't have the time or the skills to keep it on the road. And so now they say, I can get this electric car, which isn't boring.” 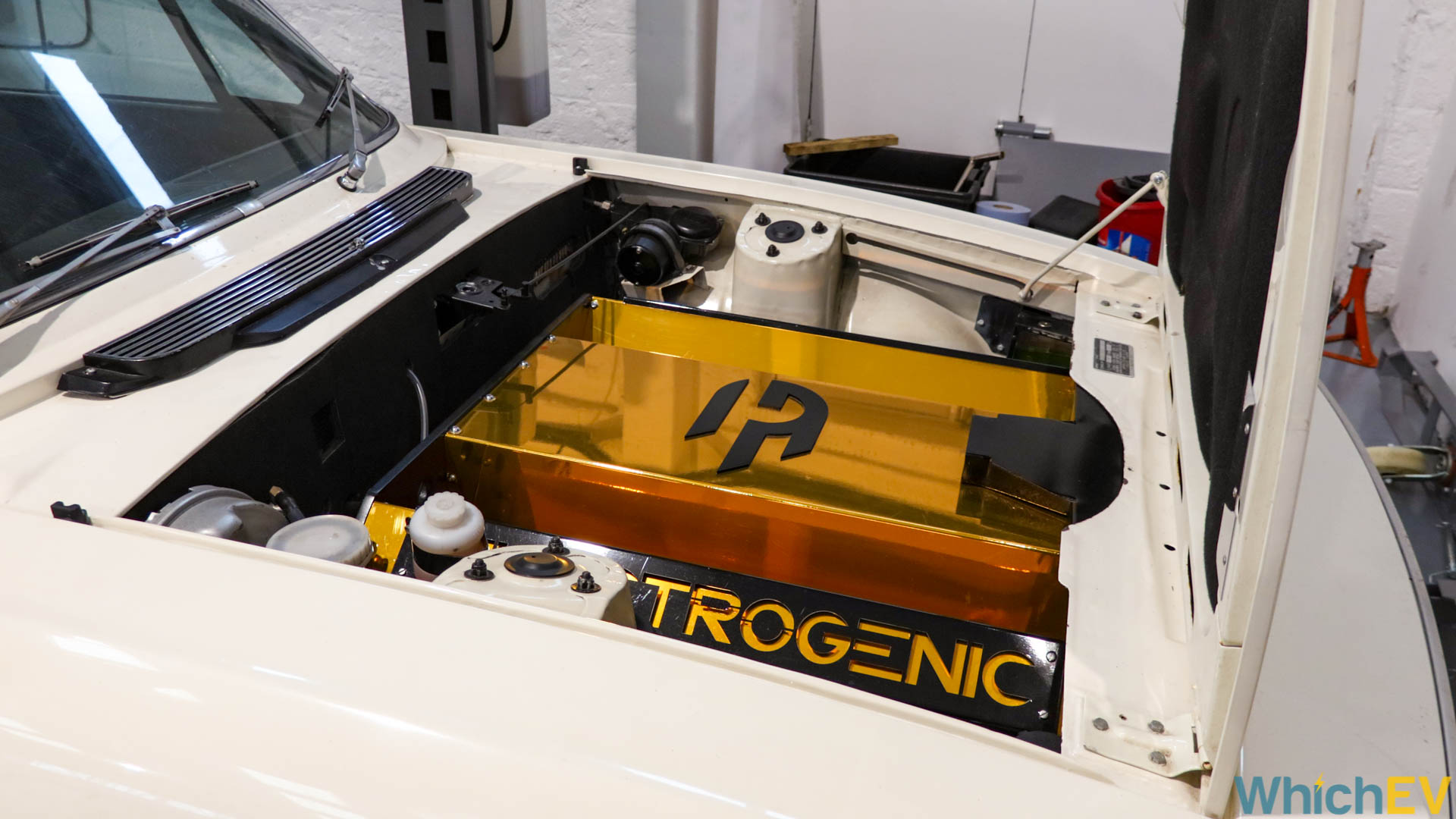 “We're about making cars that people want to drive,” continues Drummond. “That's really the point. The reality of classic car ownership is it all sounds very romantic, but they’re difficult to keep going, they're unreliable. It's usually the only the enthusiastic member of the family who can actually start them in the first place. What we do is we take away all that hassle.”

A perfect example of this is the Porsche 356 C Electrogenic had in its workshop for our visit. It was an original 1964 example, with its chassis completely restored. This is a similar rear-engine platform to the 1963 Beetle we mentioned earlier. Electrogenic has integrated a HyPer 9 here as well, with its 107hp delivering nearly double the power of the 60hp engine in the original car. This feeds into the original gearbox, so the driver gets a similar sense of engagement, and the interior is close to what came out of the factory too. It has 160 miles of range and takes about eight hours to recharge with its 7.5kW AC support. 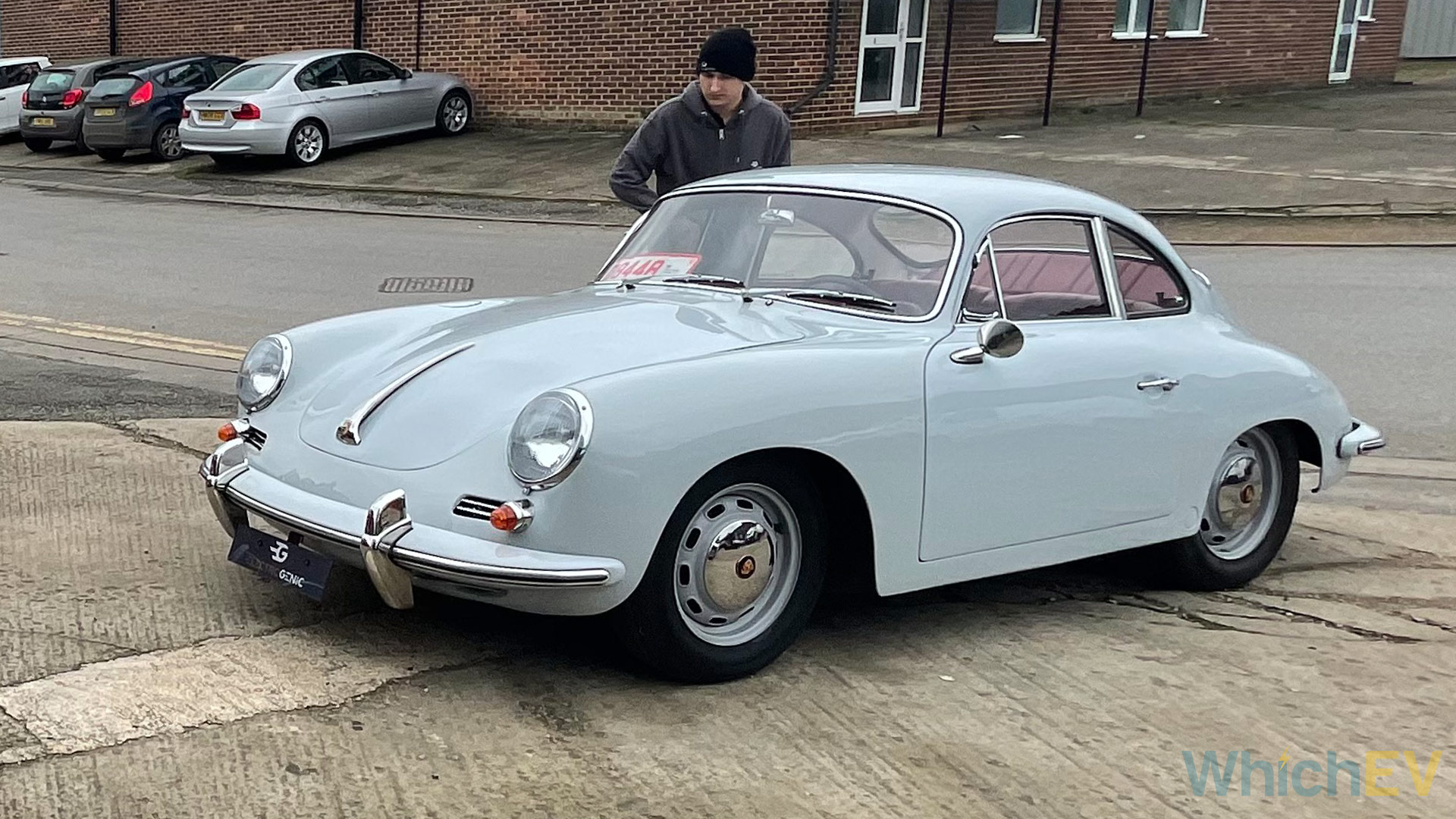 We took the Porsche 356 around the track at Bicester Heritage, where 45 businesses build and test specialist vehicles. Although you don’t get the sound of the flat-four engine of the original 356 with Electrogenic's electric conversion, the driving experience is otherwise similar. However, you could pretty much start in any gear with the electric motor. This is handy because a Porsche gearbox from this era isn’t as refined as later units. We drove around in third for most of our test drive. There’s no power steering, but this car weighs under a ton so that’s not a huge issue.

The car wasn’t set up to do regenerative braking unless you press the brake pedal, again giving more of a consistent feel to the original car. Overall, it’s very much a classic car driving experience. You still feel like you’re driving a period vehicle from the mid-1960s, but without the hassle of whether it will let you down. And, of course, it looks absolutely stunning.

The Mini Cooper we also drove at Bicester Heritage was a more modern experience, although still far from contemporary. It too has a HyPer 9 motor, but the gearbox isn’t original in this case. Instead, Electrogenic has replaced the Mini box with one from a Citroen C1 dating back to around 2012. This car only has a 22kWh battery pack, enough for about 80 miles of range, but it’s aimed squarely at city driving. 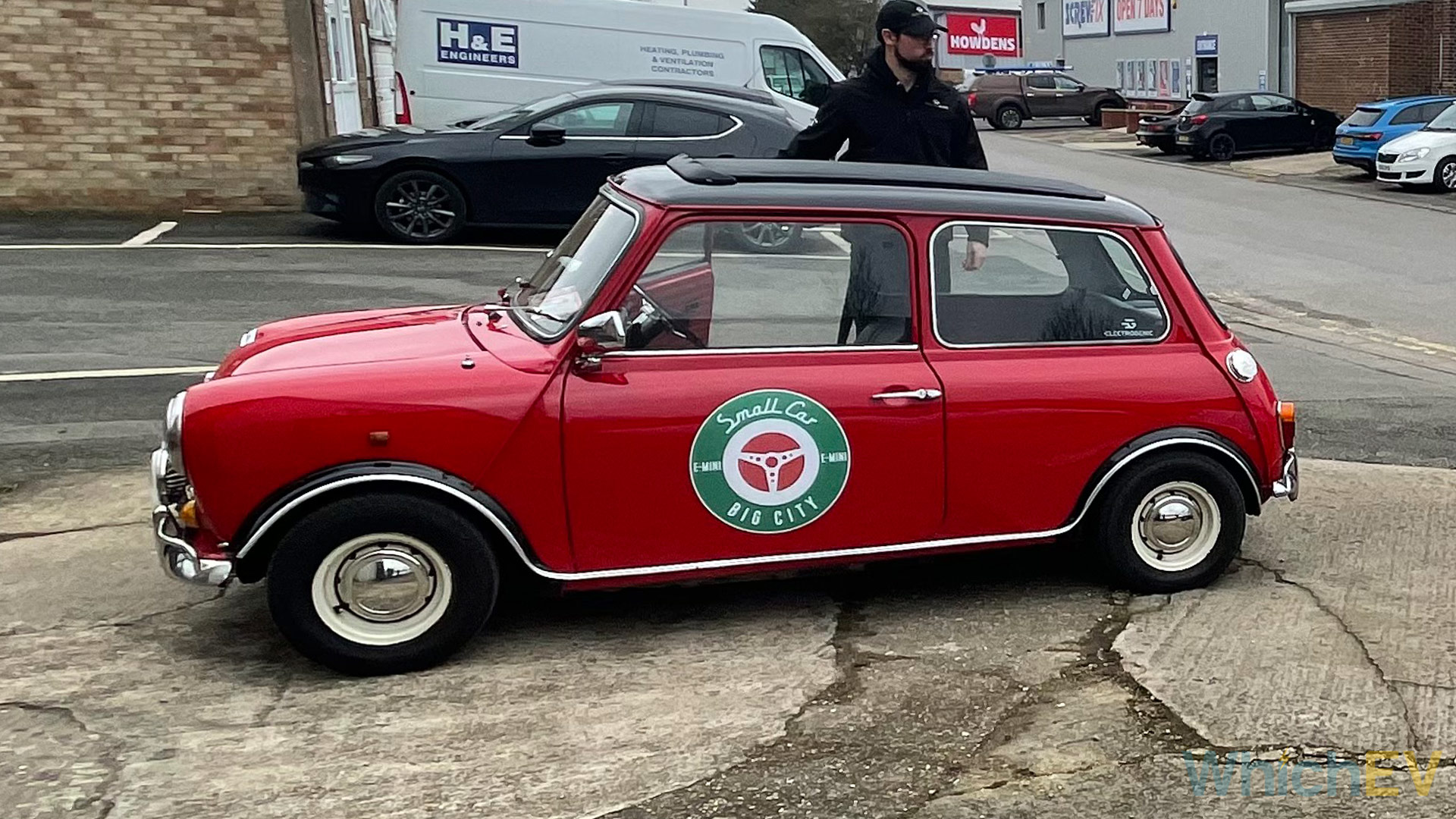 The example we drove was created for a company in London called Small Car Big City. This is a tour company that uses a fleet of electric minis for group trips of two or three cars at a time to see the sights of London. The small battery is in the boot but there’s still some room for customer luggage.

The modern gearbox means that changing gears in the Mini is much smoother than the Porsche. The Mini is also from the 1980s so much more recent, although it still has enough period veneer inside to make your grandmother’s sideboard jealous. Although Electrogenic has tuned the HyPer 9 motor in this Mini less for performance than with the Porsche 356, it still feels rapid compared to a standard Mini from the era, and the Mini was already huge fun thanks to its go-kart like handling.

However, this car does have regeneration when you take your foot off the accelerator, although not quite to one-pedal driving levels. The Classic Mini was already an incredibly cool and practical city car. In this electric form, it’s even more practical and easier to drive. It’s another classic car experience without the hassle.

Electrogenic isn’t just focusing on one-off or small run classic conversions. Like AVA, whose Croxford Defender we recently drove in Ireland, Electrogenic is also looking at mass conversion of working vehicles. “We've done a large research project with Worthy Farm down in Somerset to develop a low-cost solution for converting agricultural Land Rovers to Electric, which has been very successful,” says Drummond. If you’re not aware of Worthy Farm, this is where Glastonbury Festival takes place.

Electrogenic’s project with Innovate UK and Cardiff University aims to create a drop-in kit to convert Land Rover Defenders to electric to reduce emissions and increase reliability. The kit is intended to cost around £25,000 and pay itself back in savings after a four-year period. “After that you still have another 50 years and 200,000 miles of happy motoring before you have to change anything,” says Drummond.

As with the more recreational EVs described above, the Land Rover kit includes a HyPer 9 that replaces the original engine and interfaces with the original gearbox. This sits in the front alongside a 50kWh battery pack. “You literally unbolt the engine, you remove the fuel tank, the exhaust and the engine and you just bolt in the kit and away you drive,” says Drummond. The result is a car with 150 miles of range on country lanes at 50 miles per hour, and even more when driving at lower speeds. It can pull trailers and go up and down 30% inclines just as easily as the original car, with similar power and torque to the previous diesel engine. After 18 months of testing at Worthy Farm, the feedback has been excellent.

Electrogenic’s conversions show that electrification can make problematic classic cars into reliable daily drivers. “I haven’t driven a single car where I haven't thought, you know, this is going to be much better electric and it is, because they're always less fussy and there’s more power and torque,” says Drummond. “It's much easier to drive, much smoother. It's more accessible. It's just an improvement.” But they can also give working vehicles a new, greener lease of life. That could have an even more positive impact on the environment.