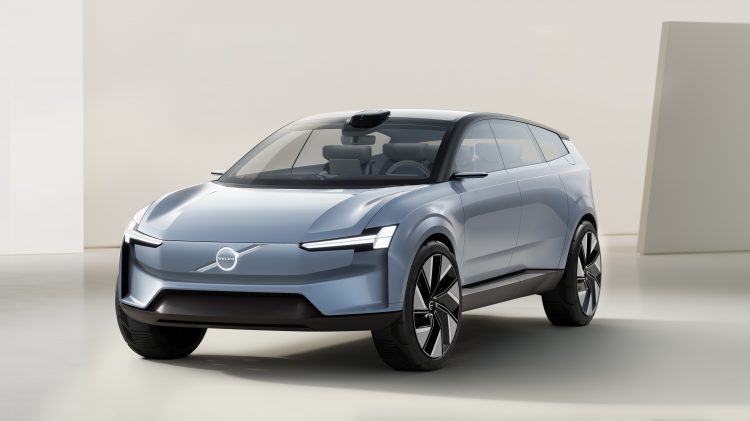 Volvo Cars has unveiled what it calls its manifesto for the next generation of all-electric Volvos, the Concept Recharge.

True to the heritage of Scandinavian design, Concept Recharge has the mantra of ‘less but better’ at its core.

For example, by removing the complexity of the internal combustion engine, the designers have been able to evolve the car’s proportions to increase interior space while also improving aerodynamic efficiency.

Volvo’s first generation of electric cars, such as the Volvo XC40 Recharge Twin AWD, shares a floor with combustion engine-powered cars, which requires a balance in proportions and space to be able to accommodate both a battery pack and an internal combustion engine.

The next generation of Volvo’s fully electric cars will feature flat floors, as previewed in the Concept Recharge. By removing the engine and replacing it with a full battery pack under the flat floor, the designers have extended the wheelbase and the wheelbase of the car. The result is shorter overhangs, as well as a lot more interior space, including a large storage area between the front seats.

The traditional grille has been replaced with a shield-like structure, supported by a new interpretation of Volvo Cars’ Thor’s Hammer headlight design. These include the latest HD technology-enabled pure graphic which open at night to reveal the main lamp units.

Signature vertical rear lamps connect to the brand’s strong design heritage but are reimagined with a set of wings that extend at higher cruising speeds to further improve overall aerodynamics.

The Concept Recharge represents the future of Volvo Cars, according to Robin Page, Head of Design at Volvo Cars.

“Our Concept Recharge represents a manifesto for the all-electric future of Volvo Cars, as well as a new type of vehicle,” he said. “We continue the rich roots of Volvo’s design DNA in a modern and fresh way as we move into our all-electric future.”

A large, 15-inch standing touchscreen is the centre of a new and improved user experience for the company’s next-generation connected infotainment system. Designed to be logical and intuitive to use, the technology helps provide a serene and calm experience.

Also, the Concept Recharge will reflect Volvo Cars’ safety ambitions in coming years. A LiDAR sensor, built by technology company Luminar and a critical part of Volvo Cars’ plan for forthcoming safe autonomous drive technology, is placed in an optimal position on the roof to collect data on the environment around the car.

Volvo Cars is committed to all-out electrification and has ambitious plans for its next generation of fully electric cars. It aims for cars to have more than double the real-world driving range compared with its current electric cars, allow for much faster battery charging and offer lower costs for owning and charging alike. By the middle of this decade, it aims to sell 1.2 million cars globally, with at least half being fully electric cars.

Volvo’s technology roadmap shows that the company has the ambition to become the best manufacturer in the pure-electric era, according to Håkan Samuelsson, Chief Executive of Volvo Cars.

“As we transition to becoming a pure electric premium car company by 2030, we are committed to creating the best cars in our 94-year history,” he said. “This is an exciting time in our development, and we will deliver on growing customer demand for pure electric cars that offer seamless connectivity, industry-leading safety standards and advanced autonomous drive.”

Volvo Cars will also move its software development in-house and focus on shorter development cycles, reflecting the growing role of software as a differentiator for the car of the future and a driver of profitable growth.

Volvo Cars is also bringing battery cell technology development and production closer to home and aims to tailor its future batteries to the needs of its customers: a longer range and faster charging times.

It will do so by improving lithium-ion battery technology on its forthcoming second generation of electric cars, starting with the company’s first SUV on a completely new electric-only technology base.

In the near term, Volvo Cars plans to work with leading Swedish battery company Northvolt to further increase the energy density in its battery cells by up to 50 percent compared with what is on the market today. Later this decade, Volvo Cars also looks to break the 1000 Wh/l energy density milestone, in order to achieve 1000km (621 miles) of real driving range.

As Volvo Cars is moving towards becoming an all-electric car company, the importance of sustainability increases in parallel. While the company will increase the battery energy in its cars over the coming decade, it will also work to continuously reduce their carbon impact.

Battery cells from Volvo Cars’ planned collaboration with Northvolt aim to be produced using 100 per cent renewable energy, while it is working with other battery suppliers to do the same by 2025.

The aim is to achieve as many synergies and efficiencies as possible throughout the entire battery supply chain and ultimately deliver the most sustainable electric vehicles ever made, according to Henrik Green, Chief Technology Officer at Volvo Cars.

“We want to offer our customers sustainable pure electric cars that makes their lives easier and more enjoyable,” he said. “Through smart innovation and collaboration with key partners, we can give customers what they want – more range, faster charging and lower costs – and further boost widespread adoption of electric mobility.”