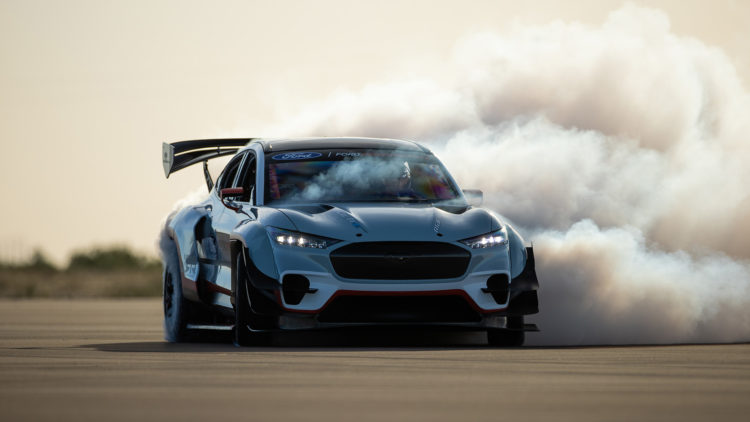 The EV will have seven motors and an “ultra-high performance” battery making this Mustang a pure-bred racehorse. Three will be attached to the front differential and four attached to the rear. A single driveshaft connects the motors to the differentials, with the set-up designed to give the powertrain greater adjustability for various uses.

The immense power is drawn from a 56.8kWh battery using nickel manganese cobalt pouch cells, which Ford claims offer high discharge rates. That system is designed to be cooled by a dielectric current during charging, decreasing the time between runs.

The vehicle is mostly made of carbon fibre and the bonnet made of lightweight organic composite fibres because Ford wanted to experiment and defined this Mustang as a “test bed for new materials.”

The car’s design has been tweaked to offer high levels of downforce, with Ford claiming it can deliver more than 1,000kg at speeds of 160mph. The Ford design team and RTR used many of the same tools Ford uses for its race cars and production programmes. Aerodynamics are optimised for shape and location, with a focus on cooling ducts, front splitter, dive planes and rear wing. With these specs we would not be surprised to see Ken Block driving it to its extreme limits in one of his Gymkhana video series, as he loves using supercharged Fords on incredible tracks.

The Mustang Mach-E is just the latest all-electric project of the Ford Performance Motorsport division. It seems that they are having quite a lot of fun in pushing batteries to their limits as just couple of months ago we reported on the Mustang Cobra Jet which will also have 1,400 hp and will  crush the quarter-mile in the low-8-second range at more than 170 mph.

The Mustang Mach-E 1400 is the result of 10,000 hours of collaboration between Ford Performance and RTR aimed at bridging the gap between what an electric vehicle can do and what customers tend to believe it can do.

Apparently, this car is so fast that it is a unique experience even for seasoned pilot like Vaughn Gittin Jr., RTR Vehicles founder and motorsports champion.

“Getting behind the wheel of this car has completely changed my perspective on what power and torque can be,” he said. “This experience is like nothing you’ve ever imagined, except for maybe a magnetic roller coaster.”