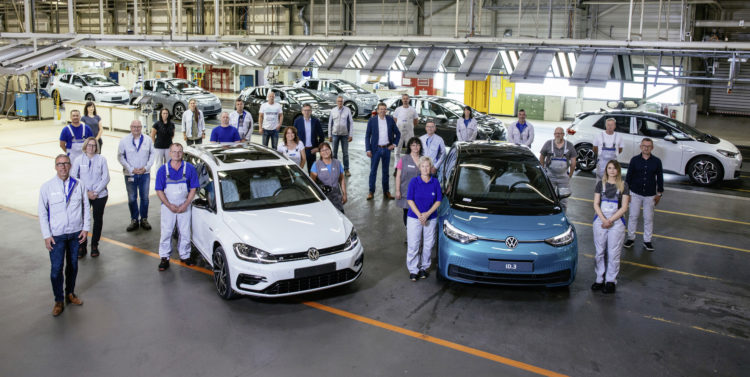 After 116 years the iconic Zwickau car factory in Germany will now only produce electric vehicles. From 1990 till today, over 6 million Volkswagen vehicles were produced in the plant. It will now become the largest electric vehicle factory in Europe, and will be the home of six electric models from the brands Volkswagen, Audi and Seat that will be manufactured in 2021.

This factory is an automotive institution as it was open for most of the 20th century and produced cars from Horch and Audi till the 40s, and even the iconic East German car the Trabant from the late 50s to early 90s.

The last model with a combustion engine, a seventh-generation Golf R Estate with a 2.0-litre petrol power plant, left the assembly line at the Zwickau car factory on June 26th. Reinhard de Vries, Managing Director of Technology and Logistics at Volkswagen Sachsen: “Today is a historic day for us. We are proud of what we have achieved so far, and at the same time are greatly looking forward to what the future holds for us. The trend towards electric mobility will continue to pick up speed. We will meet this demand from Zwickau: we have already created the capacity to build 330,000 vehicles next year.”

The German automaker has wasted no time and already started to renovate the plant. According to company officials, after a conversion phase lasting several weeks during the summer, the first electric vehicles will be produced there at the end of the year. Production of the ID.3 1st Edition already started at the site in west Saxony in November 2019, and the ID.4 will follow this summer, photos of which were leaked on a Chinese website.

The investments for conversion amount to around 1.2 billion Euros. In the final expansion stage from 2021, six MEB models will be built for three Group brands in Zwickau. All 8,000 employees will be prepared for production of electric cars and for handling high-voltage systems as part of various training measures. The Zwickau team will complete around 20,500 days of training by the end of 2020. This will ensure long-term job security at the Zwickau location.

Zwickau is only the latest example of how automakers are starting to switch their factories for the production of EVs. Even Renault is thinking of making the Alpine factory an all-electric vehicle plant.