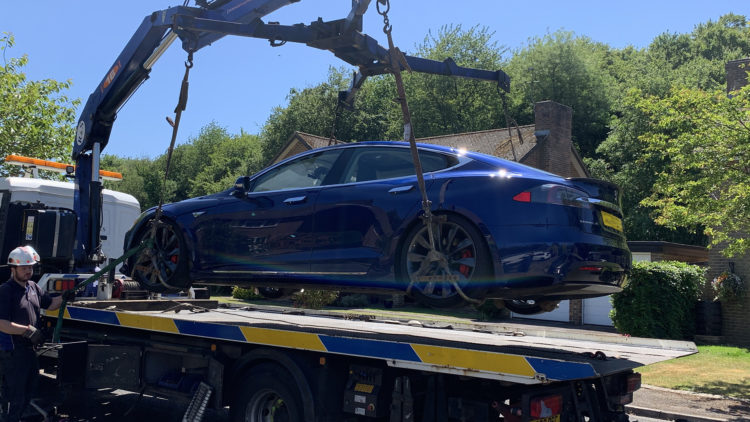 WhichEV reader Dan got in touch with us recently to tell us something important about his wife's Tesla Model S: it had completely stopped working. The car wouldn’t drive at all, and when he contacted Tesla the company couldn’t access the car remotely either, so it had to be towed. This is Dan’s story, and it reveals some important details of a known fault as well as sage advice for all purchasers of second-hand Teslas, of which there will be an increasing number over the next few years.

The first thing that we should explain is that Dan is a bleeding edge early software feature adopter. Since purchasing his pre-owned 2016 Tesla Model S in January 2020, he has been getting all the latest firmware updates as soon as they arrive, even the beta ones. It was during one of these downloads that the problem started.

“On the 23rd May, the Model S was downloading yet another big software update, this time 2020.16.2.1,” explains Dan. “It was downloading over Wi-Fi, so it should have been fairly quick. By 3pm in the afternoon the update had still not progressed and the car had stopped talking to the phone app, which is not a good sign. The main screen was also very slow to respond. I tried a reboot as the update had not started yet, but it didn’t come back. I got a black screen of death!”

Since the media control unit (MCU) was no longer working, it wasn’t possible to drive the car, which is the first thing to realise about modern vehicles, not just EVs: the car’s workings are so connected to its computer controller, a fault in that could render it inoperable. So Dan had to call Tesla, and they agreed to pick his car up. This was after trying to connect to it remotely, but of course that still requires the MCU to be working, which it wasn’t.

Even when the recovery truck arrived, there were further problems. “With the computer bricked, the parking brake was locked and there is no manual way to release it. They could have tried to use skates under the wheels to move the car, but the skates are too wide for the tail lift, plus you need four people to move a Model S as it weighs 2.6 tonnes!” So the original truck had to go away and the next day a ‘Tesla Ranger’ showed up. After plugging in his laptop he confirmed that the MCU couldn’t load its firmware or be re-flashed, as it was now in a read-only state.

Then a further visitor from Tesla arrived the next day to assess how the car could be moved. Finally, after the first recovery attempt started on a Tuesday, a second recovery truck with a support vehicle arrived on the Friday of the same week and spent 1.5 hours loading the Model S onto a flatbed using a crane. Dan’s car was at last on its way back to Tesla to be repaired. In some ways, he was lucky that this occurred when the Model S was at home. “Now imagine being on vacation in Europe and this happens!” he says.

The heart of the problem is a known design fault in the Model S of this era. “Apparently, every single Tesla made before April 2018 has an MCU1 computer with an NVIDIA Tegra module using a Hynix 8GB Flash chip that is going to fail at some point,” explains Dan. Luckily, his car was still under warranty. “Tesla will swap out the MCU1 computer under warranty with a reconditioned unit, but there is another issue waiting to happen. Apparently the MCU1 LCDs are known for leaking fluid. So we are planning to order the MCU2 upgrade as soon as we can. It’s a £2,500 upgrade, but I want to trust the car again, and I think this is the only way.” Unfortunately, Dan has subsequently discovered the MCU2 is US-only and Tesla has no plans to make it available in any other regions.

The MCU problem isn’t the only well-known one for a Model S, either. There are a range of issues, some of which Dan has also experienced. “On the third day of owning the car, we went to drive the car in the morning, but the central screen was blank, and it wouldn’t drive,” he explains. “We called the dealer and they told us to call Tesla support. It turns out that when you buy a Tesla, it can take 2-3 weeks for them to transfer and activate the car to use the Tesla app on your phone, even when you buy a new car apparently. You really need the app to be running on day one.” This was how Dan learned that the Tesla MCU also apparently has the equivalent of a PC’s CTRL-ALT-DEL hard restart. This involves pressing the brake pedal and both scroll wheels on the steering wheel at the same time. After Dan rebooted the car it was working again, but this was an initial indication that the MCU would soon fail.

Dan’s car has also had intermittent problem with its driver’s-side door, which at one point culminated in the handle continually trying to open. This was more problematic than you’d initially think, since each door handle has its own computer. “We then noticed one of headlamps had a yellow tinge and wasn’t as bright as the other one,” he adds. “Apparently this is another of the common Tesla Model S faults.”

Usually, you would expect that experiences like this would put you right off your vehicle purchase. But Dan doesn’t regret buying his Model S at all. Tesla’s customer service had been good throughout, but the key factor was that warranty. “Without it, we would be into around £4,000 for Tesla parts and installation plus the recovery costs,” he explains, referring to the overall cost of all the repairs so far.

Dan doesn’t see this as a story that should put you off purchasing a second-hand Tesla, either. In fact, he had originally planned to get a brand-new Tesla Model 3 Performance. However, he then saw a low mileage fully specified 2016 facelift Model S for exactly the same money. “What totally sold us was these cars come with a 4-year, 50,000-mile warranty from Tesla. They do strip the lifetime Supercharging from the car, but that was a good enough trade-off for us. The car was going to replace our fuel-sucking Mercedes ML500 that was way past its best and costing us £4,000 a year in servicing and repairs.”

Now that Teslas have been on the UK market for four years, they are starting to appear on the used market at reasonable prices. You can pick up a Model S 70D for as little as £35,000 from Tesla’s approved stock, and they can still be a cost-effective choice. “The Tesla Model S is mostly made of aluminium, so they don’t rot, they barely need any servicing and cost nothing to run,” argues Dan. That is, assuming they don't develop a fault out of guarantee. The moral of this story, therefore, is that you’re best off getting a used Tesla that comes with a warranty. This can be the case even if you buy from a 3rd-party dealer, but may not be, so check this very carefully. From our reader Dan’s experiences, a manufacturer warranty is an essential inclusion when buying a Tesla second hand.

If you’ve had an issue with your EV, please contact WhichEV via Facebook or Twitter, or send us an email. We’d love to hear your stories.

Tesla UK has been given an opportunity to respond to this article.