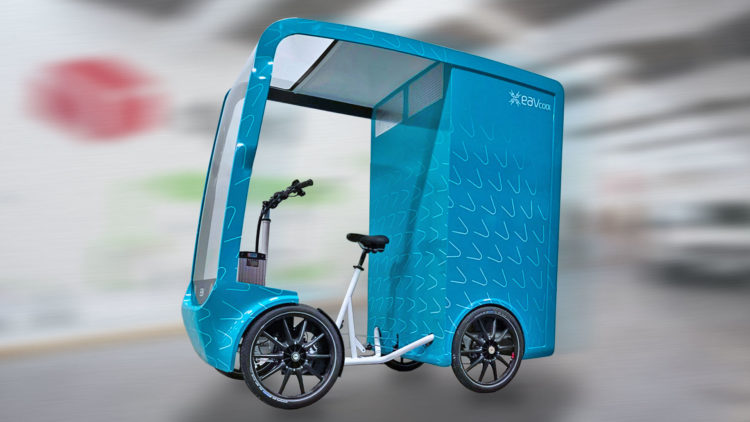 When delivering any product, the last mile can be the most complicated. With an ever-increasing number of people living in large cities, there are plenty of rules and regulations surrounding which vehicles can go where, carrying what and where they can park. Against that backdrop, F1 composite components specialist Adam Barmby decided to create a new solution for a new world. The idea started in 2016 and came to fruition in 2018. Bridging the gap between cycle dispatch and engine-powered Light Commercial Vehicles (LCVs), his range of EAV vehicles looks to bring a comfortable, affordable delivering system into urban areas across the world. WhichEV checks out the available range and the cool new addition.

As soon as you see one of EAV's solutions to the ‘last mile delivery problem', you begin to suspect that Barmby has spent time in the Far East. The auto rickshaw (or tuk-tuk), has been a standard transport for decades. However, alongside the convenience, there is a load of noise and smelly pollution.

What if you used an electric motor to enhance a strong, comfortable, yet lightweight bicycle, and added secure storage, regenerative brakes and even some clever environmental controls to allow for the transport of cold or frozen produce?

Having launched successfully at the Oxford EV Summit back in August, the company has been working hard on customer development and courier service DPD has just taken delivery of its first shipment of EAVans (electrically assisted vans). The DPD version has a 60-mile range, which gives up to 100 drop-offs per charge.

Barmby explains, “We wanted the EAVan to be as usable as possible by anyone. Being exposed to the elements or being low to traffic isn’t going to appeal to anyone. So, we started with the idea of the outer body of a light commercial van and we added the electric pedal-assist propulsion system”.

The standard model can accommodate a load of 120Kg and there is a Pod-Trailer that can handle a 200Kg load. At first glance, the speed of 15mph might not seem quick, but when you consider that the average speed for traffic in London is around 8mph, then you realise that 15mph could be fast enough.

The EAVans charge from a standard 3-pin socket and fall within the existing regulations for eBikes.

The latest addition is a temperature-controlled version, the EAVcool, which is a quadricycle, measuring 2 metres by 1 metre with a 120Kg payload capability. Developed with specialists Solomon Commercials, the rear compartments are designed from high-tech insulation and provide two completely independent zones for frozen (down to -18° C) and chilled product. The temperature is maintained by a highly efficient 12-volt cooling system from Dometic.

Active cooling, rather than relying on insulation bags, means that the EAVcool can operate within a continuous cold chain.

Nigel Gordon-Stewart, Executive Chairman of EAV said, “Our programme with Solomon Commercials is a further extension of the EAV concept and now allows cool cargo such as perishable foods, nutrient products, flowers, plants, biopharmaceutical products, chemicals and even artwork to be delivered without needing vans or cars and therefore emissions free.”

“It is clear evidence of the real potential of vehicles like the EAVcool to operate efficiently and environmentally in towns and cities worldwide. EAV’s contribution is increased efficiency and a very significant reduction in both pollution and congestion which, we truly believe, will help to change the world we live in”.

Adam Barmby, technical director at EAV commented, “It has been fantastic to work alongside Solomon Commercials and see this first EAVcool develop. EAV is classed as a cargo e-bike, but really, we started from scratch and reimagined an entirely new type of vehicle to operate within the parameters of today’s urban delivery market. It is a modular design, so we can extend or shorten the chassis and change the cargo configuration to fit the brief. In addition to the design flexibility, there is also a whole new set of efficiencies that we are tapping into here. Realistically, the EAVcool can move as fast or faster than a traditional van through many cities because of the different routing it can take”.

The market for this kind of vehicle is huge. Not only will it operate in an environmentally friendly way, it will also allow the people who do the delivery to stay fit and healthy. DPD recently opened the UK's first all-electric parcel depot in Westminster and plans to have 500 electric LCVs running before the end of 2020.