74 / 100 Overall
£40,980 inc VATPrice as Reviewed
Pros
Cons
Verdict
The Nissan Qashqai could be a “gateway drug” to pure EVs, with the same kind of driving style as a Leaf but in a car that is powered by petrol. It’s more efficient, faster and much better to drive than a regular hybrid. If you’re ready for a full EV, try Nissan’s Ariya instead. But this is still a better option than petrol, with some of the pleasure of a BEV but none of the charging worries some are so concerned about.

Small, family SUVs are all the rage these days. But one of the first to begin the transition away from the previously traditional family hatchback was the Nissan Qashqai.

It is a veteran of the field, as proven by its continued popularity. Now in its third generation, the new Qashqai got an overhauled interior last year, as well as an improvement in its drivability, with much keener handling. 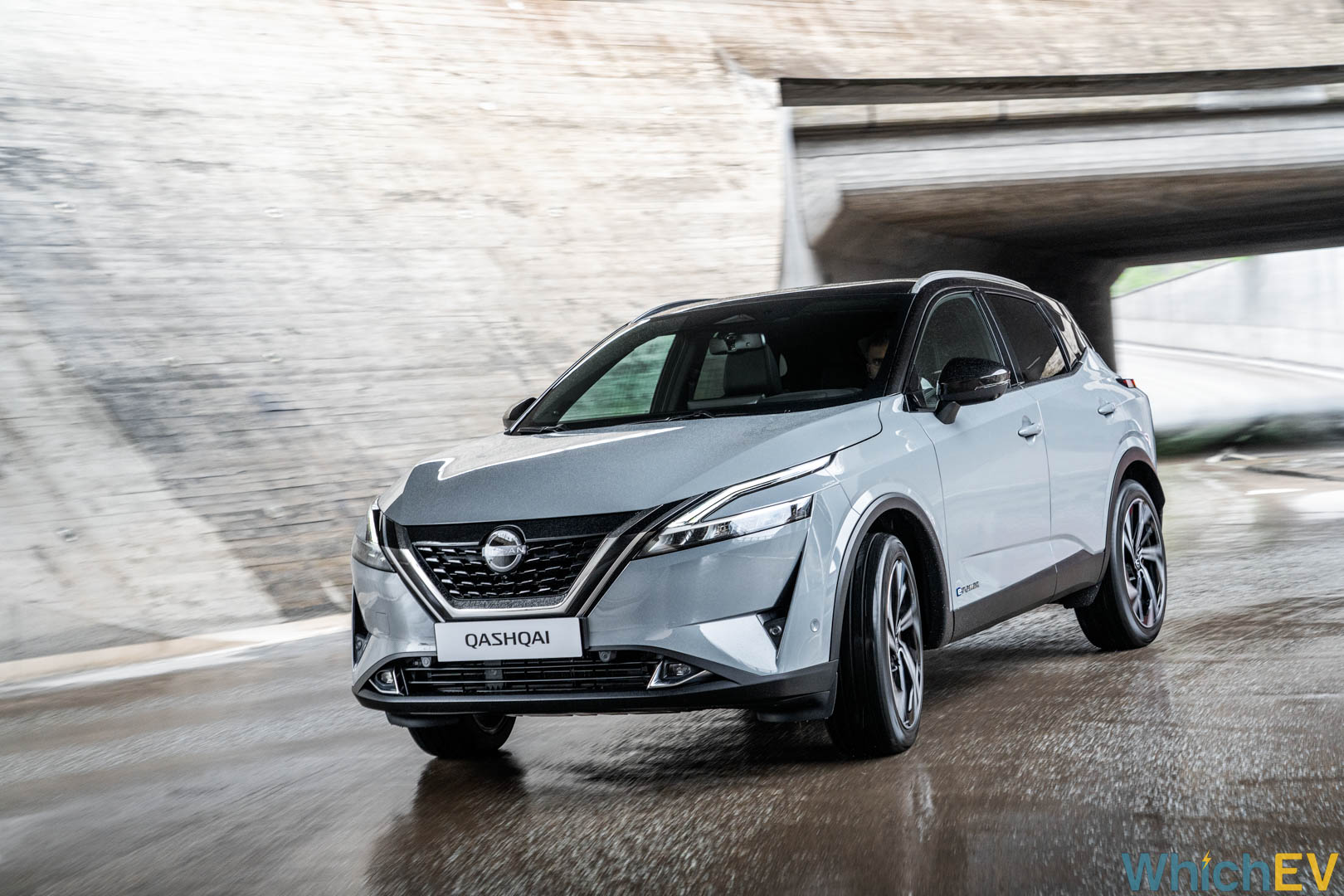 But now, the e-Power has been added to the range. And, 18 years after the Qashqai was first unveiled, it marks a key milestone in Nissan’s move away from the petrol engine.

The e-Power is somewhat unique in the world of hybrids. Strictly speaking, it's an all-electric car, as the only thing driving the wheels is an electric motor.

But what’s keeping the motor’s batteries topped up? A 1.5-litre petrol unit.

The engine isn't connected to the wheels. Instead, it acts merely as a generator supplying the electric motor, and, in that respect, the e-Power is unique.

While this means it isn't truly an all-electric car, it doesn't need charging off the mains, so it's not a plug-in hybrid. And, although the petrol engine means it charges itself, it can't be classed as a self-charging hybrid, either. Whatever that means anyway. 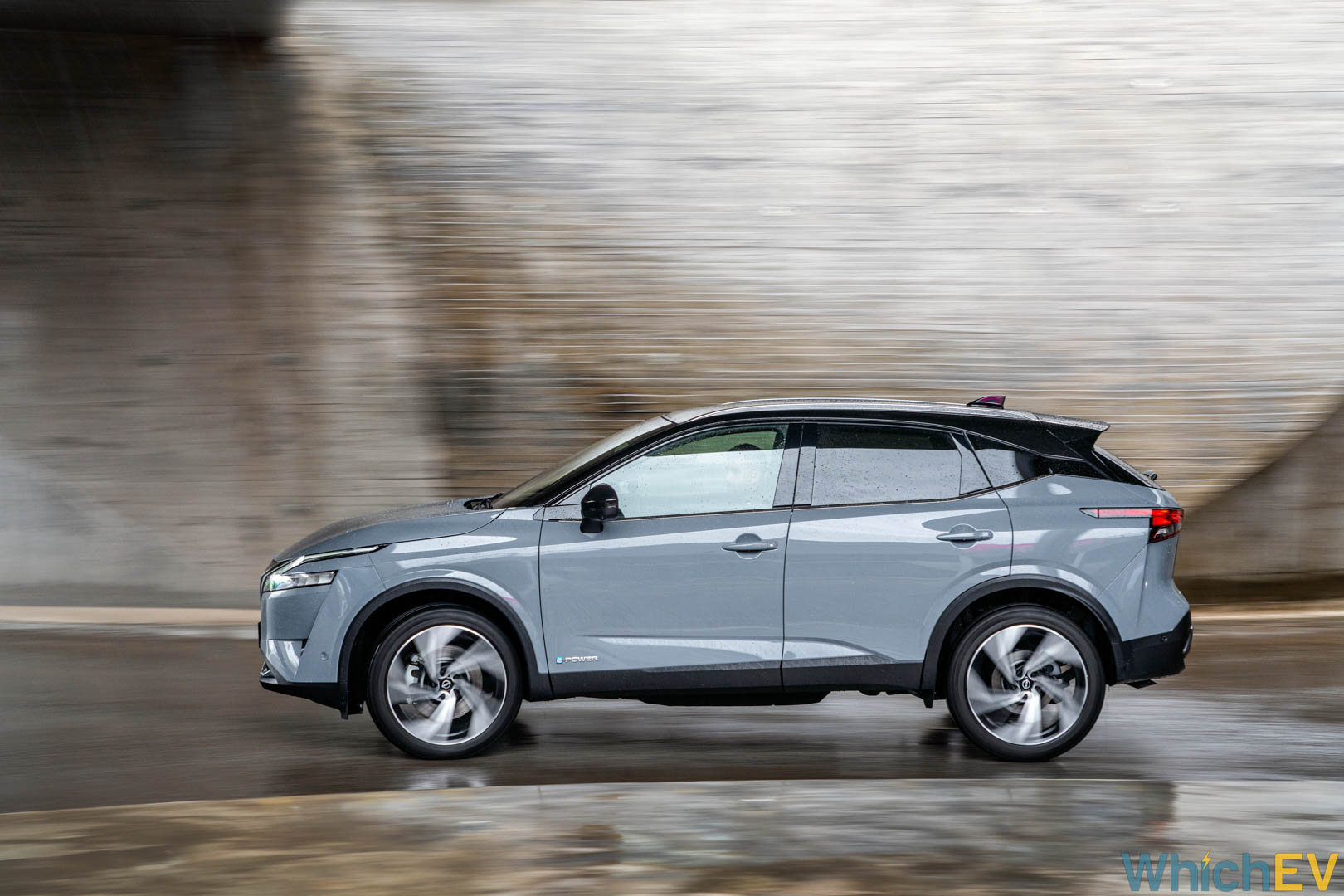 Nissan’s stance is that it’s a ‘plug-in hybrid for people who don’t want to plug their cars in’.

The car is intended to bridge the gap between a conventional petrol vehicle and an all-electric car. It is a way of easing customers into the future without replacing the fuel-filling with home charging.

But is it any good?

The new Qashqai e-Power is available in Acenta Premium, N-Connecta, Tekna and Tekna+ trims, ranging in price from £32,950 and £40,980, which are about £4,000 more than the equivalent fossil fuel-powered versions.

Only N-Connecta and above feature the 12.3-inch NissanConnect infotainment system, while you also get 18-inch wheels (19-inch on Tekna and 20-inch on Tekna+ trims). 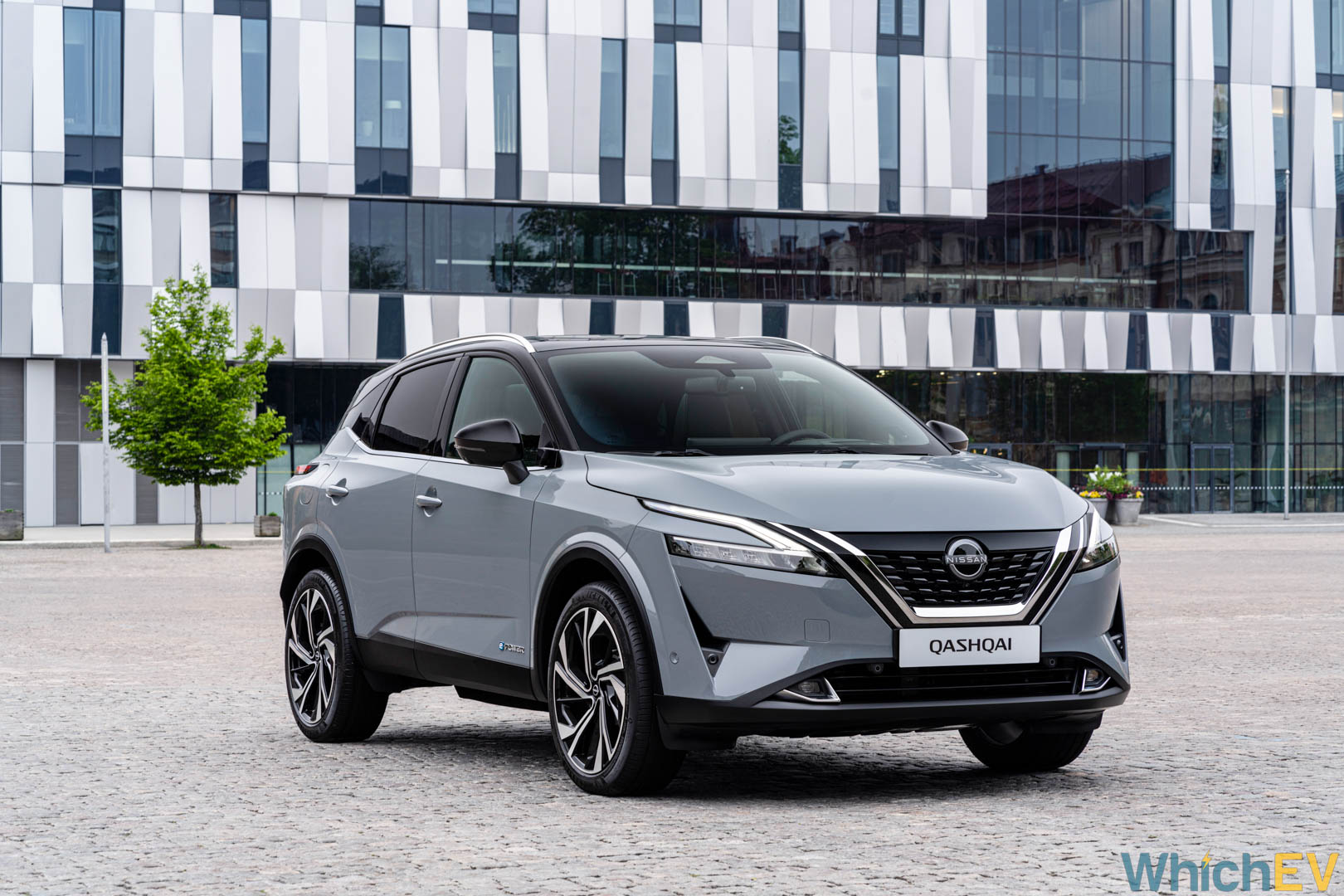 Numerous packs are available as optional extras. These include a heat pack which adds a heated steering wheel, heated front seats, and a heated windscreen. The glass roof pack adds a panoramic roof and rails. 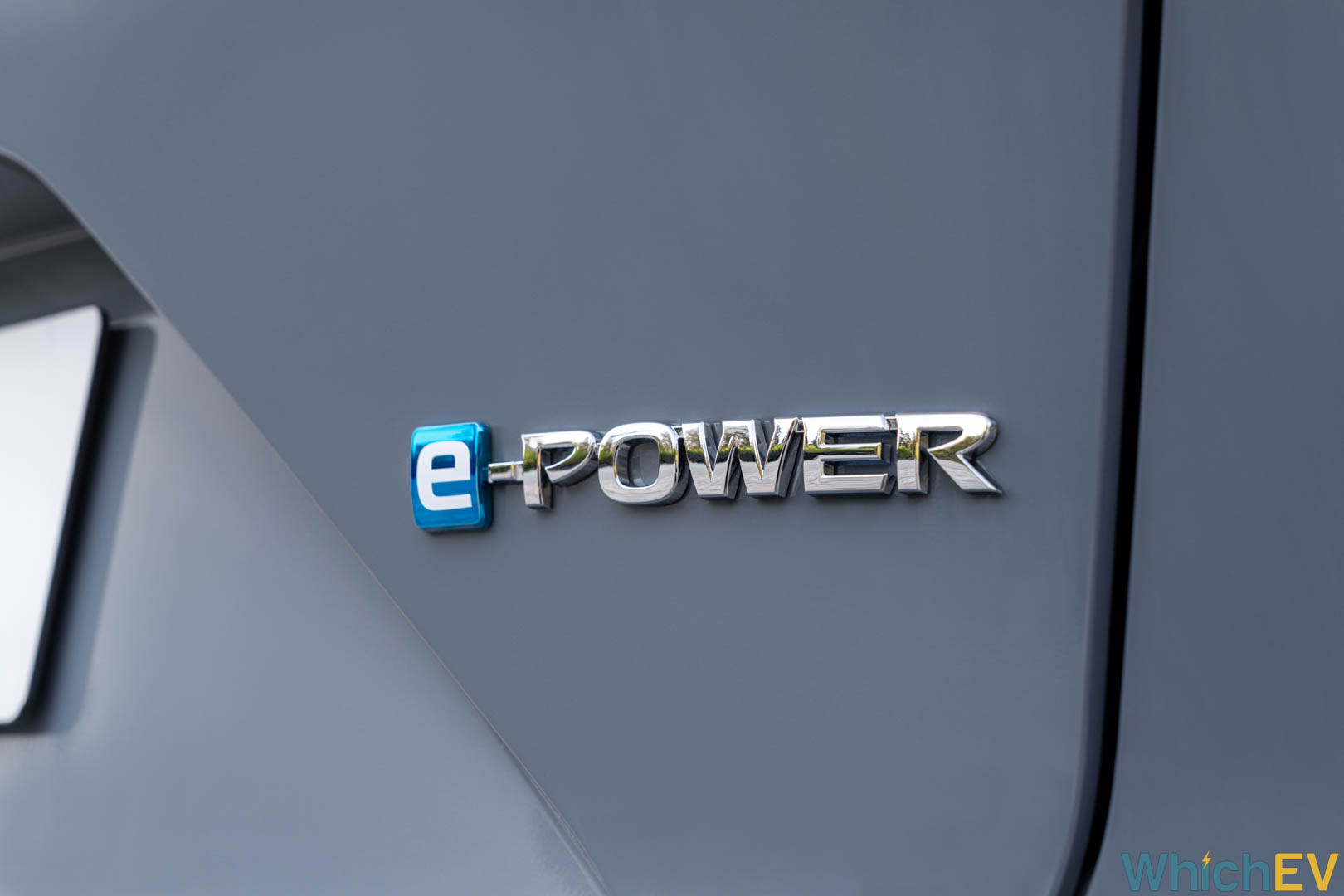 A wireless charger pack also adds a wireless phone charger and the ability to control various functions via remote control. In addition, lower trims can upgrade to the Bose sound system.

Some of these optional extras are available as standard on higher trims. So, it’s worth doing your research to see which features you want to choose.

There are also boot linings, protection kits and protectors, as well as LED front fog lights that can be added if you’re willing to pay extra.

The Qashqai got an overhaul when the third generation came out last year, retaining its v-grille but tidying up the design, losing the roundedness of its predecessor.

A glossy black grille and some badges are the only notable differences on the e-Power version, though.

The sides feature black window frames and roof, while there’s a crease in the doors above a sporty side skirt. The rear features shaped taillights with pointed edges and a prominent indentation for the number plate housing.

While the looks may divide opinion, it’s a far cry from the softly, rounded, modest original that debuted on our roads 15 years ago.

The front is very roomy, with comfortable seats and a nicely raised driving position.

The rear is equally as accommodating, with decent rear leg room and headroom. However, the slight slope in the roofline somewhat cuts into the latter.

There is plenty of adjustment in the steering wheel and driving seat, so finding an optimum position is simple. Mind you, the pillars aren't the thinnest at the front, while the roofline's slope angles the rear pillars, so they're thicker and more obstructive.

Adjustable lumbar support is included, too.

The infotainment system is housed within a 12.3-inch touchscreen. 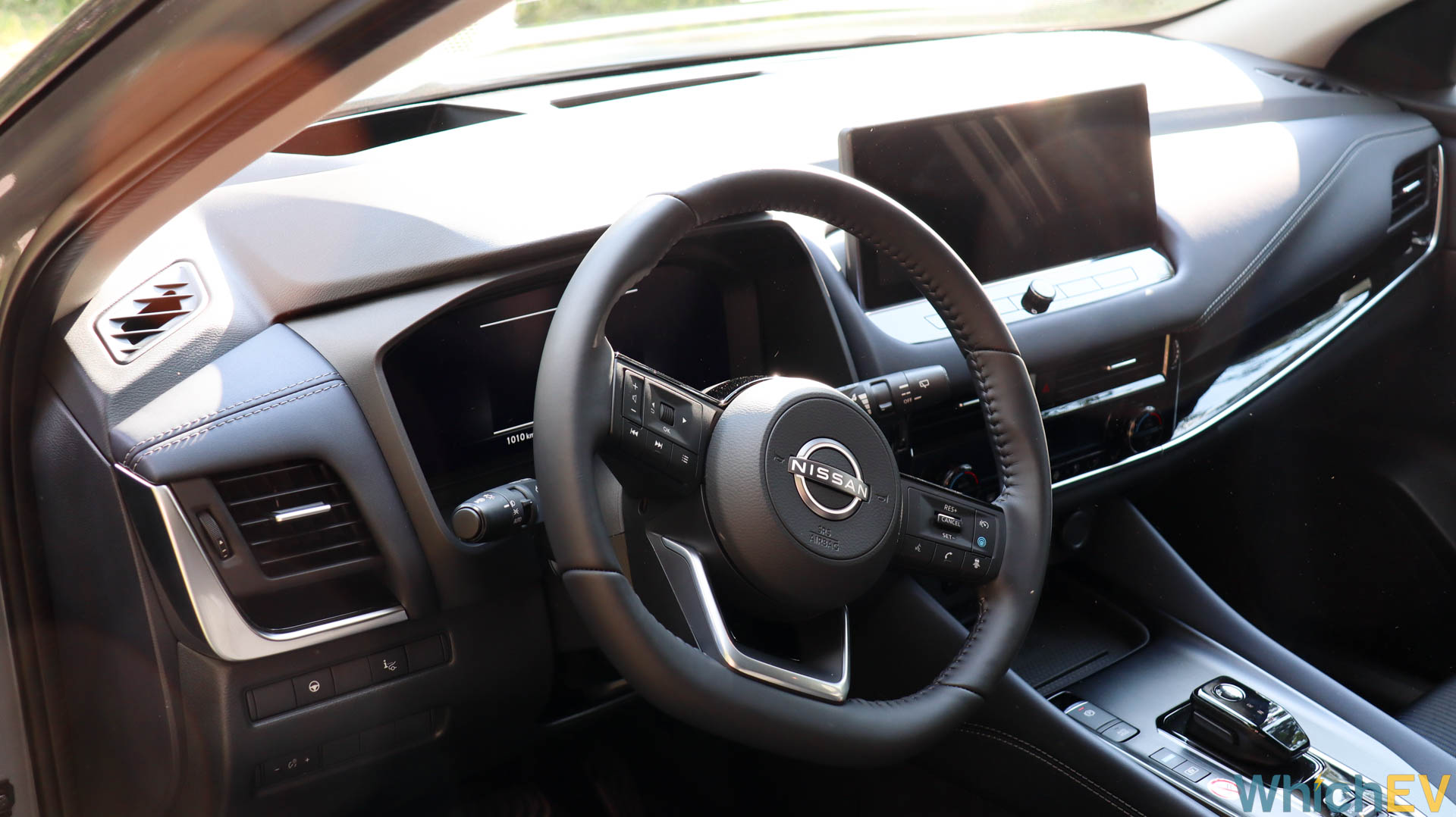 The large size sounds impressive, but it isn't a fantastic system. The screen is clear, and the system isn’t laggy, but other competitors have crisper graphics. Furthermore, the menu layouts aren’t as intuitive as they could be.

Apple CarPlay/Android Auto connectivity is included, and although the system is an improvement on the old unit, it isn't class-leading.

Thankfully, Nissan has left some physical controls in place to operate the air conditioning – so that's easy to use when on the move.

There is a rear-view camera in the entry-level Acenta Premium trim, while N-Connecta and above get an around-view monitor and front parking sensors.

A head-up display is offered in Tekna trim and above, along with a wireless charging pad and ProPILOT Park assist.

Because the wheels are driven purely by the electric motor, there's lots of torque, and the power delivery is instantaneous.

Although the Qashqai lacks the outright pace of some electric cars, it nevertheless pulls away enthusiastically. It gets from 0-62mph in 7.9-seconds thanks to 190PS driving the front wheels. 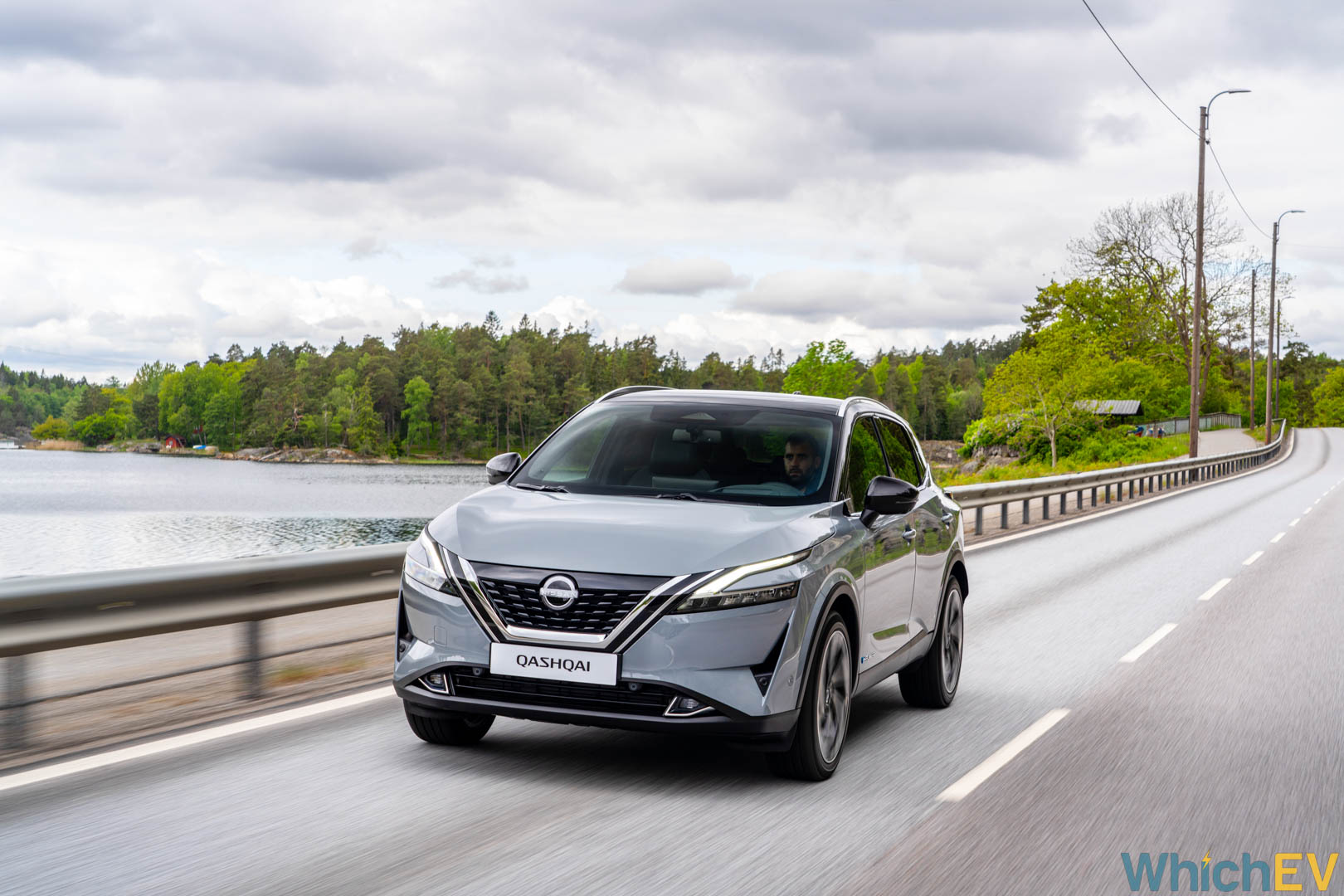 That means it’s the quickest Qashqai in the range – and the fastest Qashqai ever produced.

In terms of handling, the latest generation is better than its predecessor, with sharpened agility in the corners, making driving more fun.

The Nissan is no performance car, though, and the steering doesn’t weight up sufficiently in the bends to impress keen drivers. But it’s more manoeuvrable than the Qashqai of old.

Despite the added mass of batteries and an electric motor, it doesn’t appear to negatively impact the car’s handling characteristics much.

The Qashqai glides smoothly over creases on uneven road surfaces and is decent at motorway cruising. But the car is still nimble enough to be very good at driving around town centres.

The regenerative braking in the e-Power (known as the e-Pedal) is fierce when dialled up to maximum, but it’s nevertheless predictable once you get used to it. 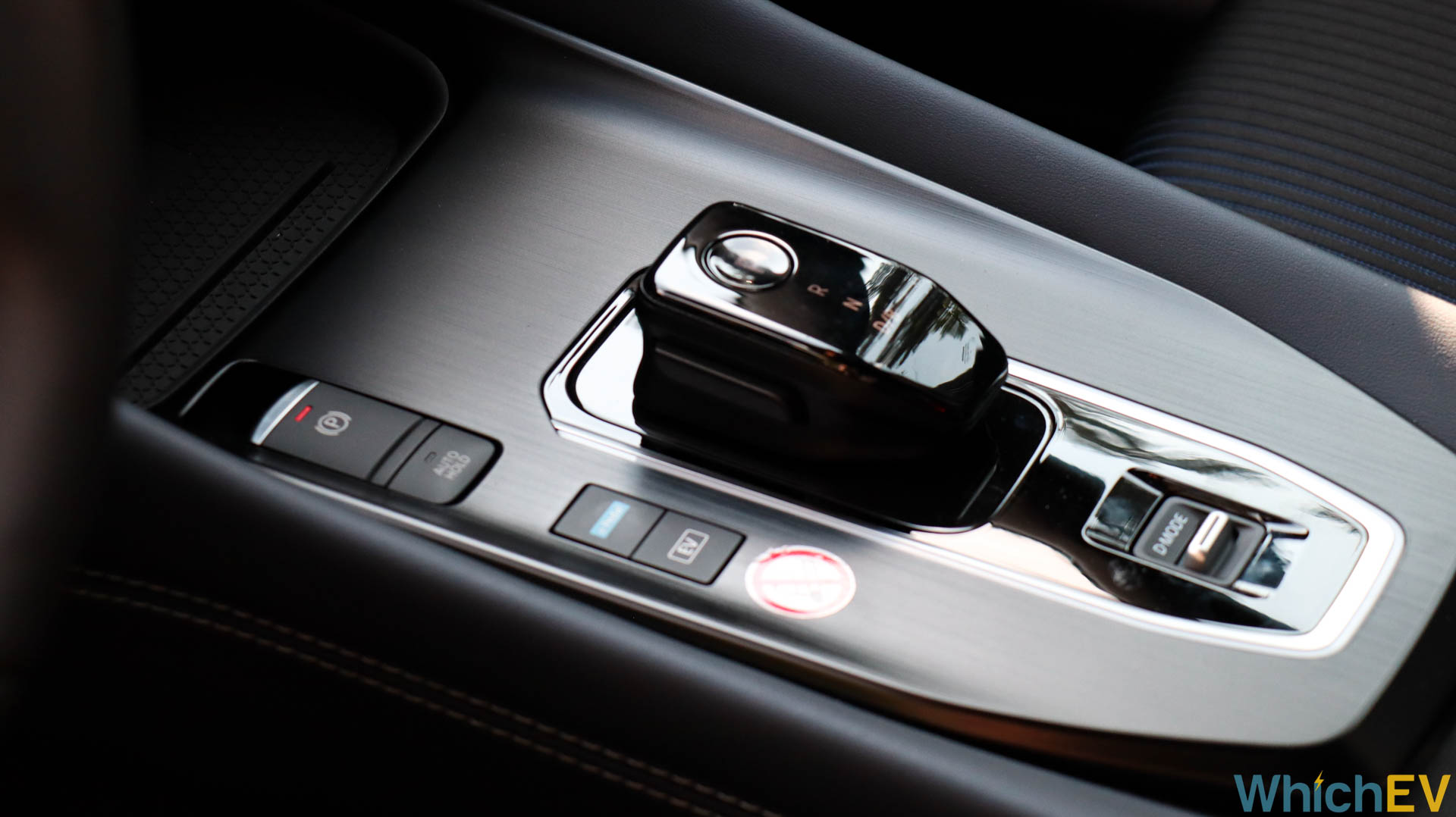 With B-mode available and the e-Pedal, the Qashqai e-Power drives in a very similar fashion to the venerable all-electric Nissan Leaf. The all-electric Ariya will offer similar one-pedal driving.

Nissan doesn’t advertise a figure for all-electric range, and, in any event, the e-Power will likely manage less than two miles. But it’s not really intended for that purpose.

You tend to pull away on the electric motor only, and it will bring the engine to life when it needs to. However, it's not particularly noticeable, and the petrol unit remains quiet unless you floor it, helped by soundproofing and noise cancellation technology.

Nissan believes plug-in hybrid users don't want to plug their cars in. So, in that respect, the self-charging nature of the e-Power makes it effortless, even though it’s not a self-charging hybrid in the conventional sense.

Nissan claims the e-Power produces 119g/km of CO2, while it manages 52.3 to 53.3mpg, which is better than any other Qashqai in the range. With current petrol prices of 190.81p per litre, that equates to 16.3p per mile – which will be a lot more than a pure BEV charged on a daytime tariff at home. 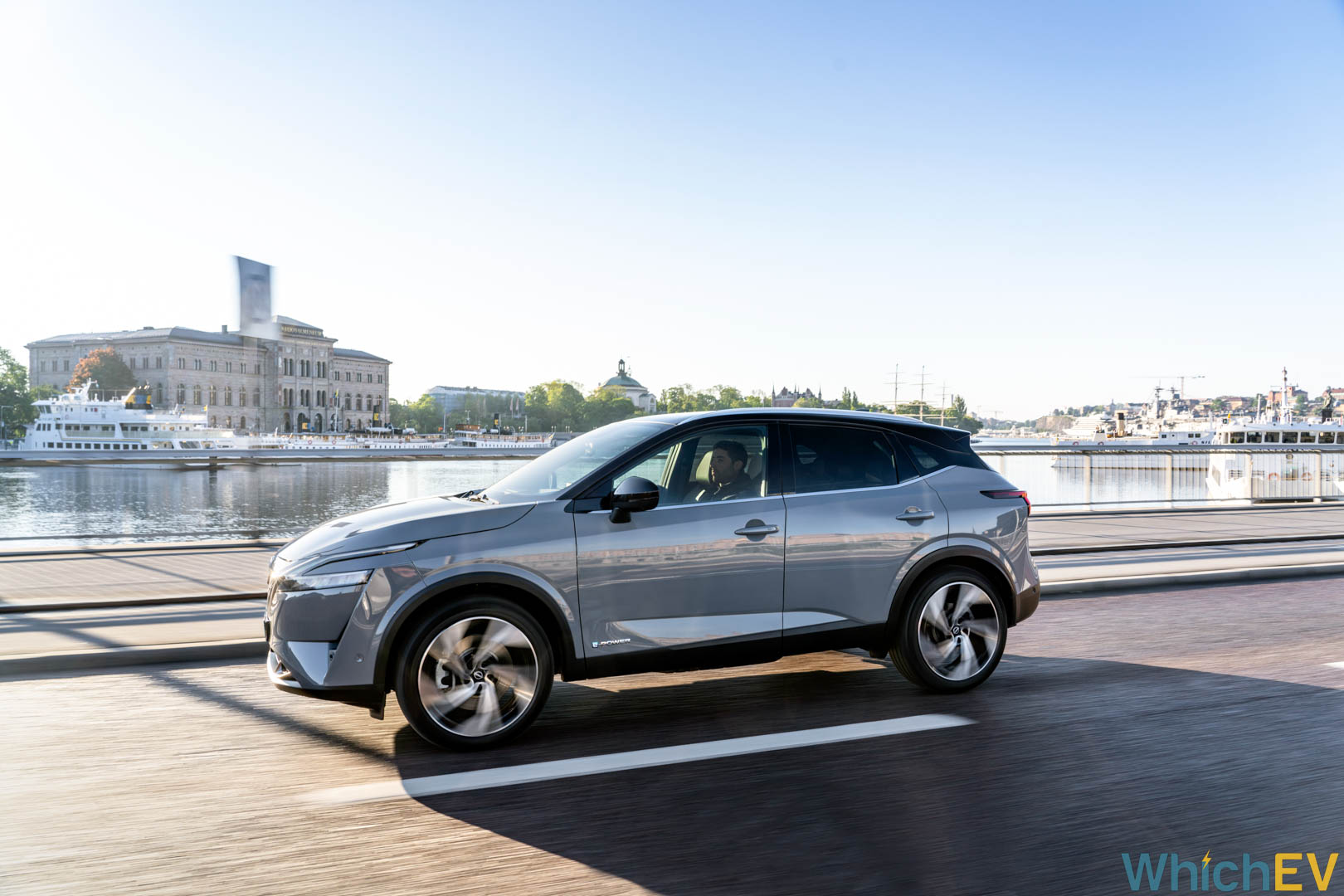 Whether the lower road tax or the increase in miles per gallon is enough to tempt you, given plug-in hybrids often have figures in the hundreds (not to mention two-digit CO2 figures), remains to be seen.

A three-year, 60,000-mile warranty is included, although a separate ten-year guarantee covers the batteries.

Nissan also offers extended warranties and servicing plans if you’re happy to pay for them.

The third-generation Qashqai was tested by Euro NCAP last year, earning a five-star rating and impressive scores of 91% for adult occupants, 91% for children and 95% for safety assists. 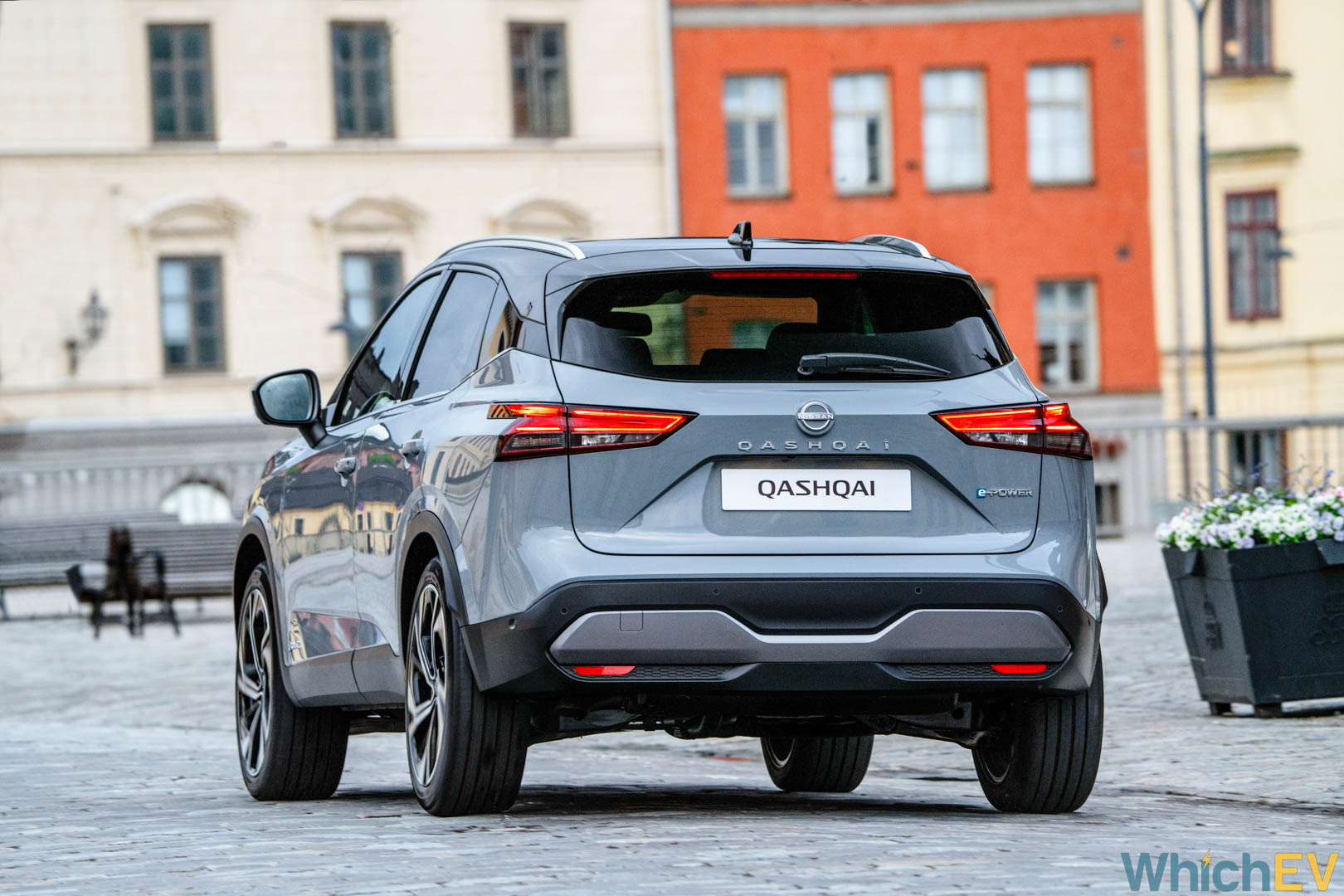 Moreover, you get a rear-view camera in the entry-level Acenta Premium model, while higher trims offer an around-view monitor and parking assistance.