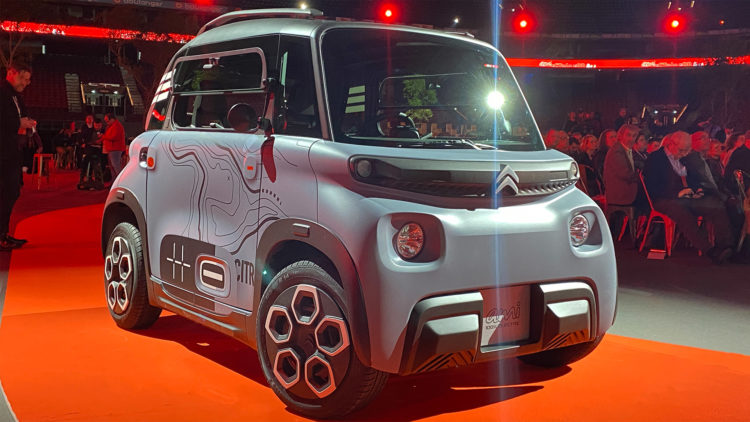 With a range of customisation options and a promise of full compliance with all current EU vehicle legislation, the Citroen Ami has been designed, from the inside out, to bring affordable transport to the masses – under the banner of ‘Electric For All'. Inspired by the spirit (rather than the physical design) of the iconic Citroen 2CV, the Ami has been three years in the making and will launch in France and Italy this June, with an initial purchase price of €6,000. WhichEV ponders the wisdom of becoming a Citroenist.

The technical details are simple enough. At only 2.41m long, the Ami is tiny on the outside and spacious on the inside. The seats are side-by-side for socialising, but slightly off-set to reduce the width of the vehicle. You can file the internal features list under the heading ‘no mod cons'. But Citroen Ami exists, has been built and will arrive in the market, as a commercial product, by June .

A small electric motor moves you along at 28mph (45km/h), powered by a 5.5kWh battery that can be charged from a standard wall socket. You get a useful boost in one hour and a full charge in closer to three hours.

When fully charged, and in ideal conditions, the Citroen Ami has a range of close to 70km (43 miles). Given that the average person in the UK drives less than 20 miles a day (and for those who live in cities it's a good deal less) the range is certainly useful.

That brings us on to the ‘Marmite' design.

Thierry Michel is credited with the initial conception and Kate Mouilleron took the design lead. Their starting point was the interior: the driver and passenger experience. That created the requirements sheet for the powertrain and external look. A true case of form following function.

At first glance, you'd have to say that it's from the same design school as the original 1957 Fiat 500, but with some very clear differences.

First, aerodynamics are not going to play a significant part in the performance of a vehicle moving at less than 30mph. Second, the boxier the design, the more internal space you have. Third, as far as possible, the designers have opted for simple structural design and interchangeable panels. The doors, for example, are the same on both sides of the vehicle – so one opens to the left and the other to the right – making maintenance and replacement nice and easy.

Citroen has also included the ability for the owner to customise the vehicle with the addition of multi-coloured Ami accessories kits.

You might be interested to know that you've read this far and we have yet to use the word ‘car'.

It's legally closer to a quadricycle than a car and that's something that Citroen has done on purpose. While UK law is quite stringent when it comes to the rules governing four-wheeled, road-going powered vehicles – things are a lot more flexible in France and Italy. As a result, kids in those countries will be able to use the Citroen Ami from 14 years old with no driving license.

We asked Arnaud Belloni about this and his answer made sense, “I am a father. If you give me the choice of my 14 year old being on the road with a bicycle, moped of Ami, I will choose the Ami every time, It is much safer”. Hard to argue with that.

Which brings us on to the price. During our meetings with Citroen's hierarchy, they kept referring to the low price of the Ami. We found it hard to categorise the €6,000 price tag as low, but that's where Citroen's finance options kick in. Specifically, one where you can put a deposit of €2,500 and then pay €19.99 a month for four years. That leaves a ‘balloon payment' of almost €2,500 – or the possibility of just handing it back. It's possible that a kid could save their allowance for a year or two, do some odd-jobs and beg mum or dad to help with the initial payment. Once mobile, they only have to worry about the monthly payment (and nominal insurance) until their 19th birthday. At which point, you would imagine, they are looking for something else. Interesting model.

One other financial option that Citroen discussed was a ‘pay as you use' model, in partnership with Free2Move. We've used products like Lime in Germany and they are pretty good. You install an app, find the electric scooter/bike you want to use, unlock it, drive to your destination and secure it again. Citroen is expecting to offer a similar service with Ami.

In a turbulent and rapidly evolving personal transport market, many motor makers saw sales fall in 2019. Citroen appeared to buck that trend – claiming a small, but noticeable, increase of 1%. While that might not seem like much, CEO Vincent Cobée believes that it points to the success of Citroen's focus on the customer. Care for the environment is an ever bigger influence when it comes to making a purchase. There are new challenges for urban mobilisation and and on-going change in our everyday consumption habits. Manufacturers who correctly interpret those trends will greatly increase their chances to survive and thrive.

We were told that, in its current form, this product may never arrive in the UK market. That said, Citroen's marketing and communication director, Arnaud Belloni, told us that everything is possible and there is certainly no limit on the company's passion for an EV future.

With up to 70% of us living in urban environments by 2050, personal transport must evolve. While the UK might not be ready for 14 year olds to be whizzing around in Citroen Ami vehicles just yet, here at HQ we're a little jealous of the lucky teenagers in France and Italy who will get to experience that freedom.

We've seen a lot of ideas for personal transport, but most have been built of dreams, prototypes and plans. Those other ideas are not launching for €6,000 this June. Citroen Ami is.