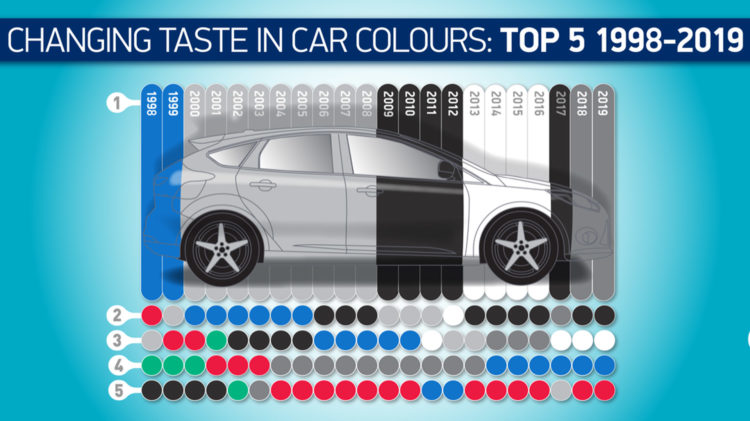 The Society of Motor Manufacturers and Traders (SMMT) has released its latest figures that show the UK’s favourite new car colour is grey. The colour retained its top spot after taking the crown for the first time in 2018.

The top 10 car colours of 2019 remained almost unchanged year-on-year, although, yellow made a reappearance in 10th place; where beige had previously held the spot since 2018. On the whole, the new car market is down by 2.4% in 2019 with around 2.3 million cars sold in the UK; as such, the only two colours to have seen an increase in this period were grey and blue (0.1%). The latter colour sits in fourth with 373,728 registrations where it held a 16.2% market share in 2019. 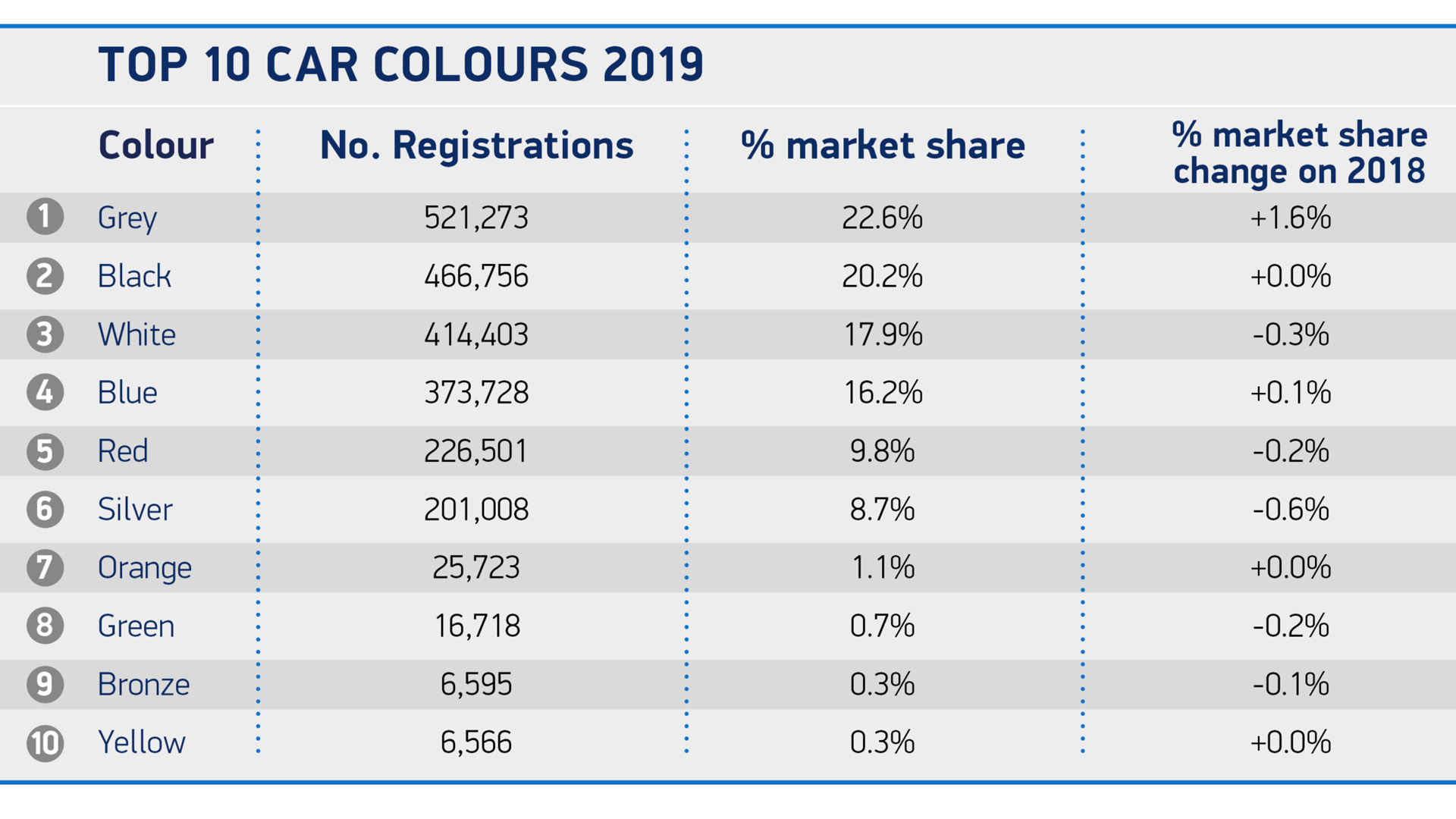 Interestingly enough, silver, which has been in the top three over 16 times in the last two decades posted its lowest number of registration for 20 years. 201,008 silver cars were registered in 2019; it saw a 0.6% year-on-year decrease from 2018.

Read next: Will the UK follow Germany in auto-trade redundancies?

The whole of the UK isn't in unison, however, as Scotland and the Channel Islands preferred white – a more joyous colour for those gloomy days. Nationwide, meanwhile, the least popular colours were maroon, cream and pink. Unsurprisingly, these colours don't come around often and might only be seen in a specific class of vehicle.

Mike Hawes, SMMT Chief Executive, said, “For most buyers, the colour is the first of many options they’ll select on their new car, and today there are more possibilities to personalise your car than ever before. Drivers can choose from many hundreds of models equipped with the latest low and zero emission powertrains, advanced safety and connected tech and exciting comfort and convenience features. There really is something to suit every driving need – and colour taste – on the market in 2020.” 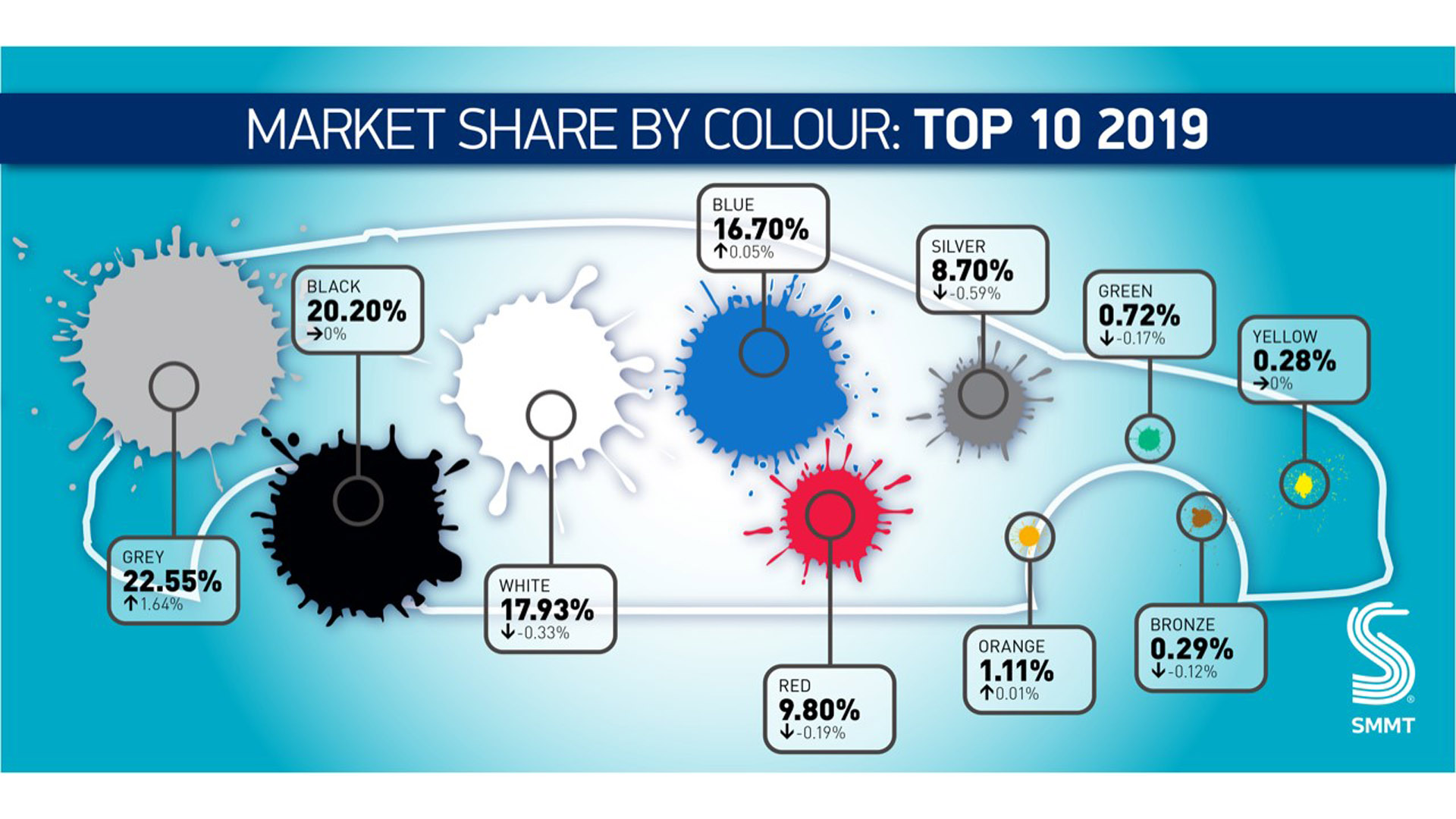 As it happens, smaller cars were more likely to be white, while larger saloons were commonly black. As for the engine type: diesel and petrol drivers tended to opt for grey, while EVs tended to be white, instead.

If you were to buy a new car and you had an infinite colour palette to choose from, which would it be? Let us know on Facebook, Twitter or in the comments section, below.