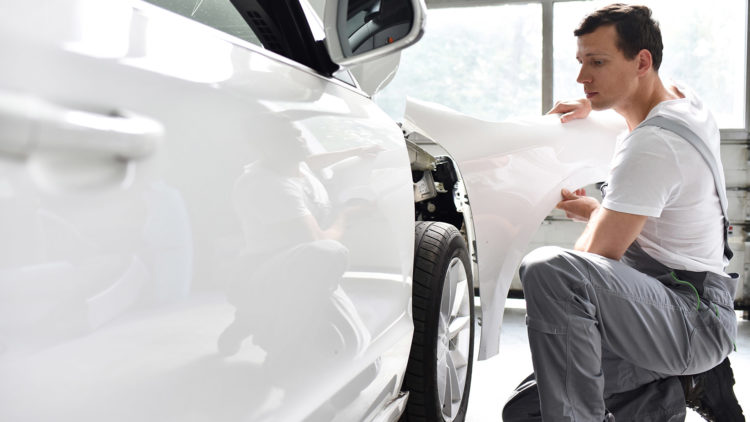 As WhichEV reported earlier this week, estimates for the number of redundancies in the German auto-trade vary between 70,000 and 100,000 over the next 10 years. That number is staggeringly big and represents close to 12% of the entire car industry workforce. The key driver has been the increasingly demanding emissions standards demanded by the EU, with huge fines to follow for any manufacturer or owner who ignores the clean air initiatives. WhichEV asks: Could the same thing happen in the UK?

Speaking with industry insiders back in the summer, we were warned that one of the biggest challenges for the motor trade was the slump in residual values. Specifically, that the major brands can support attractive leasing rates on new cars, based on how much that car is likely to be worth in, say, 3 years' time with less than 40,000 miles on the clock.

As the new EU and local emission standards continue to bite through to October 2020 and beyond, fossil fuel cars are an unattractive prospect, because resale values are likely to be a lot lower than they have been traditionally. As a result, more drivers (consumer and commercial) are genuinely considering an EV purchase for the first time – but their choices are limited and the purchase price on most EVs still carries a big premium, despite the fact that we know that EVs are simpler to build.

The result is a slow, continuous reduction in new UK car registrations.

The Society of Motor Manufacturers and Traders (SMMT) is one of the largest and most influential trade associations in the UK. It is dedicated to supporting the interests of the UK automotive industry. SMMT's Chief Executive is Mike Hawes and his view on the issue is clear.

“These are challenging times for the UK new car market, with another fall in November reflecting the current climate of uncertainty. It’s good news, however, to see registrations of electrified cars surging again, and 2020 will see manufacturers introduce plenty of new, exciting models to give buyers even more choice”, he told media recently.

“Nevertheless, there is still a long way to go for these vehicles to become mainstream and, to grow uptake further, we need fiscal incentives, investment in charging infrastructure and a more confident consumer”, he explained.

The motor trade is crucial for the UK's economy, with annual revenues close to £82 billion and the employment of 168,000 people directly in manufacturing, with a further 823,000 in associated industries.

While sales earlier in the year managed to give 2019 a good look, financially, the last three months has seen a steady slow down, with November dropping almost 10% compared to 2018. Unsurprisingly, the largest drop was from new registrations for diesel cars, which dropped over 27%. As a result, the overall vehicle market in the UK has shrunk by almost 3% in just 12 months. This SMMT chart shows a breakdown of new car (not commercial) registrations. 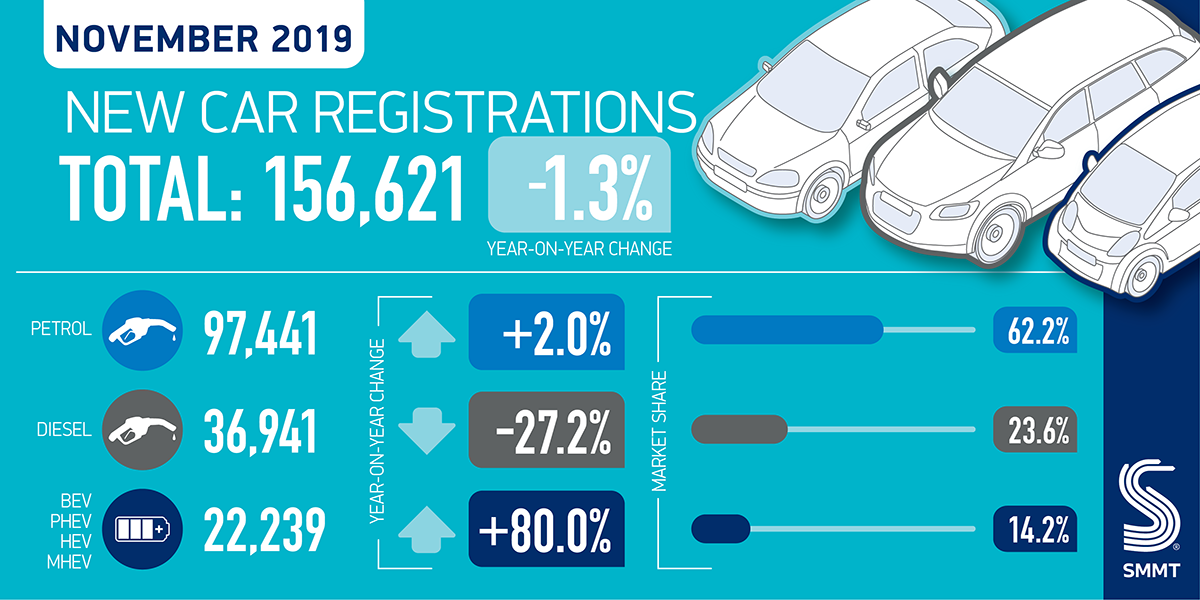 There is some good news in the figures, with pure electric vehicles climbing almost 230% – moving to an overall market share of 3%, up from 0.9% this time last year – but that figure is still far too small to balance the decaying fossil fuel numbers.

Globally, auto makers have publicly committed to spending almost $225 billion on the move from petrol/diesel over to electric vehicles. Unfortunately, if you are one of the 13,000 people that work directly for Ford in the UK, things are looking bleak, as the American giant has yet to sell a single EV while profits dropped my more than 80% last year.

A quick glance at any of the major manufacture's sites will tell you that they all have a strong message about electric vehicles. That said, when we recently visited all of their showrooms, the interest, enthusiasm and knowledge level from the staff themselves was distinctly low (apart from Nissan, who had us in a Leaf test vehicle inside 10 minutes).

Unsurprising that Nissan has moved more than 400,000 electric vehicles. While the Nissan is made in the UK, it seems that Vauxhall will eventually be using its plant in Zaragoza for the Corsa-e.

Positive moves are being made, but if the industry doesn't scramble (and scramble quickly), there could be a lot of bad news for UK auto workers in 2020. With so much at stake, will buyers consider the country of manufacture – more than in the past?