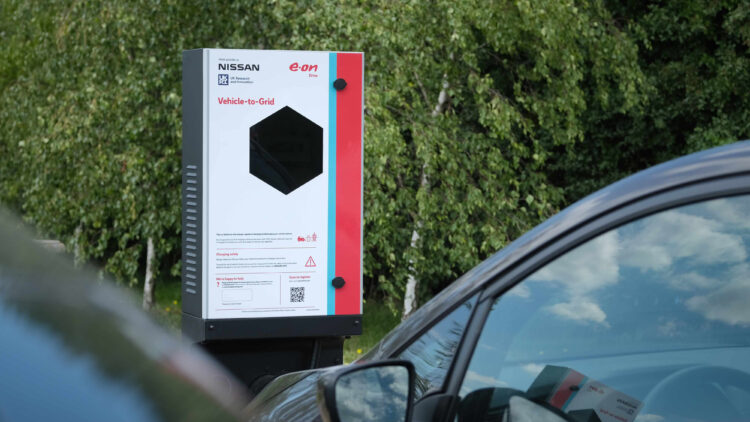 E.ON and Nissan have successfully deployed 20 vehicle-to-grid (V2G) chargers as part of a trial to demonstrate how electric vans and cars could play a role in supporting the UK grid and provide a profitable and sustainable solution for business fleets. Vehicle-to-grid technology is the future for electric vehicles as it can bring outstanding benefits both to EV owners and the grid itself. Nissan seems to have understood the potential of such a project and has been investing in it.

This is not the first time that the Japanese automaker has been involved in such projects, as just a few weeks ago we reported, how Western Power Distribution (WPD) is also currently recruiting 100 Nissan EV owners in the Midlands, South West England and South Wales to take part in its Electric Nation project, a trial for Vehicle to Grid (V2G) smart charging technology.

There are multiple trials going on in the UK now that are trying to study and collect data from V2G technology. The concept is quite simple: your car will become a decentralised power storage unit that will input stored excess energy into the grid during peak times. It will help to reduce the grid’s need for additional energy generation, either through fossil fuels or renewable energy.

The installation at Nissan’s European Technical Centre in Cranfield is the first in a large-scale V2G trial co-funded by Innovate UK. The project will test and demonstrate how storing and sharing electricity in fleet vehicles’ batteries can generate additional revenue for participating companies as well as supporting the power grid. If the project turns out successful, as we hope, this could be a game changer for the electric vehicle market as it would become a no-brainier for companies to choose the greener options for their car fleets.

This new installation is an important step for E.ON UK as the technology is very close to becoming reality, according to Luke Ellis, V2G Programme Manager with E.ON UK. “Now that we’ve proven the technology’s capabilities with these 20 installs, we’re a step closer to bringing it to market,” he said. “This is about commercialising a vehicle’s bi-directional charging capabilities, with clear advantages for businesses either already with a fleet of electric vehicles or those that are ready to make the transition to electric.”

The V2G package for participants in the trial will be offered at a heavily subsidised price through grant funding made available through Innovate UK. Vehicles compatible with the technology being used in this project are currently the Nissan e-NV200 and the Nissan LEAF. Currently, only CHAdeMO charger connections support the bidirectional power flow required for V2G, although CCS will be gaining the ability by 2025.