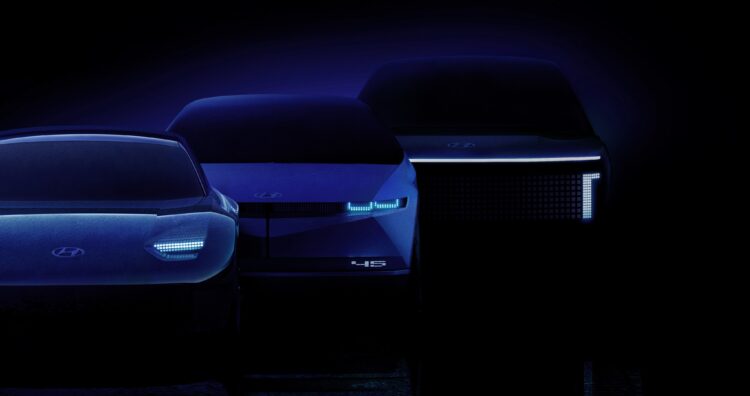 Hyundai has just announced the launch of the Ioniq brand, which will be entirely dedicated to electric vehicles. Over the next four years, three innovative Ioniq EV models will be produced starting early 2021 with the Ioniq 5, a midsize EV CUV based on the concept ‘45’.

The creation of a dedicated segment for electric vehicles shows how the Korean brand has fully changed its strategy for the future of the company. We reported few weeks ago how in the past the brand has heavily invested in hydrogen engines but once the technology did not take off, combined with the unstoppable rise of Tesla, Hyundai decided to refocus on an EV future.

According to company sources, in order to fulfil Ioniq’s brand mission, Hyundai will combine its current EV capabilities – such as ultra-fast charging, spacious interior, and battery-supplied power – with future innovations that combine design, technologies and services to integrate in-car and out-of-car experiences for a seamless journey.

The first model will be the Ioniq 5 midsize CUV car. The designers took inspiration from the past and integrated it with cutting-edge parametric pixels, a unique design element that will continue to be incorporated into future models in the EV segment.

In 2022, Hyundai will introduce the Ioniq 6 sedan, which is based on the company’s latest concept EV ‘Prophecy’, unveiled in March. At WhichEV, we hope that the 6 will be very similar to the concept that we reported on as we were impressed by its slick design and incredible features.

After the 6 comes the 7, a large SUV, in early 2024. However, the company has not released any other specifics about this model, and it has not produced a concept car on which the SUV will be based.

This new strategy aims to allow the Hyundai brand to be a leader of the market for the years to come and not make the same mistake that other companies like Kodak did in the past, which is to stop innovating.

All three models will be built on the company’s Electric Global Modular Platform, known as E-GMP, which will enable fast charging capability and plentiful driving range.

Hyundai created the brand in 2016 by introducing a vehicle named Ioniq, the world’s first and only model to offer a choice of three electrified powertrain options – hybrid electric, plug-in hybrid and battery electric – within a single body type.

The goal of the company is ambitious, almost daring, as it aims to sell 1 million battery electric vehicles and take 10% share to become a leader in the global EV field by 2025. According to recent statistics, last year Hyundai sold only 86,434 battery EVs, which means it will be a long way to go before it can achieve this milestone. However, with a new dedicated electric brand anything is possible.