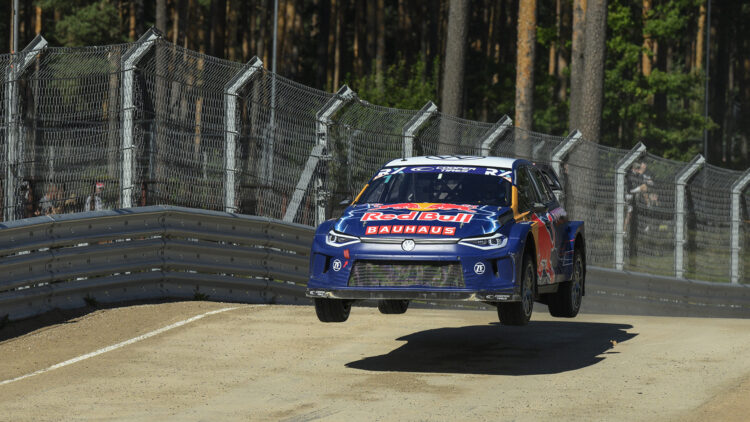 Johan Kristoffersson remains unbeaten at the FIA World Rallycross Championship, after taking his thirtieth career victory in the new RX1e on the second day of the Ferratum World RX at the Biķernieki circuit.

The Swedish driver dominated the doubleheader in Latvia, finishing top of the podium on both Saturday and Sunday, making it a three for three in the 2022 Rallycross Championship.

The first leg of the race saw Kristoffersson battling with his fellow Swede, Kevin Hansen, who despite not being fastest off the line, managed to barge his way past the four-time world champion into the first complex of corners. The younger of the Hansen brothers, Kevin, gave his absolute best, though Kristoffersson came out ahead in lap three, demonstrating the immense power of his Volkswagen Polo RX1e. Timmy Hansen, who also lined up on pole alongside Kevin, finished third to score 29 points for the Hansen World RX Team.

“I saved my tyres early on in the final so I would still have some left when I needed them, as I knew I would only have one lap to make the difference,” Kristoffersson said after his win on Saturday. “Thankfully that tactic paid off, enabling me to put in one of my best laps of the weekend so far.”

In the second leg of the doubleheader Kristoffersson once again conquered the changeable conditions as he set the fastest single lap, going one tenth of a second faster than Timmy Hansen.

Slight contact between Kristoffersson and Timmy into the first corner allowed Kevin Hansen to sweep around the outside from fifth into the lead. However, just like on Saturday, Kristofferson turned up the wick in the final lap and as the chequered flag was readied, he took the lead to seal his 30th World RX win by the margin of just three tenths of a second.

“What a weekend!” reflected the 33-year-old, following his sixth victory in the Latvian capital. “Double-headers are demanding anyway, but this weekend was even more so with the weather being so up-and-down. We had to adapt to driving the car in the wet for the first time and make constant set-up changes to suit the conditions, which was a huge challenge for the whole team.”

For Kevin Hansen, the runner-up spoils – replicating his Saturday result – marked the culmination of a tremendous recovery, given the Swede had languished at the bottom of the ranking due to a collision with Veiby at the start of the second heat. The 24-year-old won his progression race following a clash between Timmy Hansen and Niclas Grönholm, and led his semi-final until he was pushed into a half-spin by Veiby on the last lap, for which the Norwegian incurred a ten-second penalty.

Grönholm wound up fifth at the end of a difficult weekend for the Construction Equipment Dealer Team – just over 2.5 seconds shy of victory. Stablemate Klara Andersson, KMS young gun Gustav Bergström – who continued to impress with his lightning-fast launches – and René Münnich all exited proceedings at the semi-final stage.

The next set of doubleheaders of the international electric rallycross series will take place on 17th and 18th of September in Montalegre, Portugal. The 945m track situated high up in Vila Real mountains is a picturesque and historic track and formed part of the original FIA World Rallycross Championship.