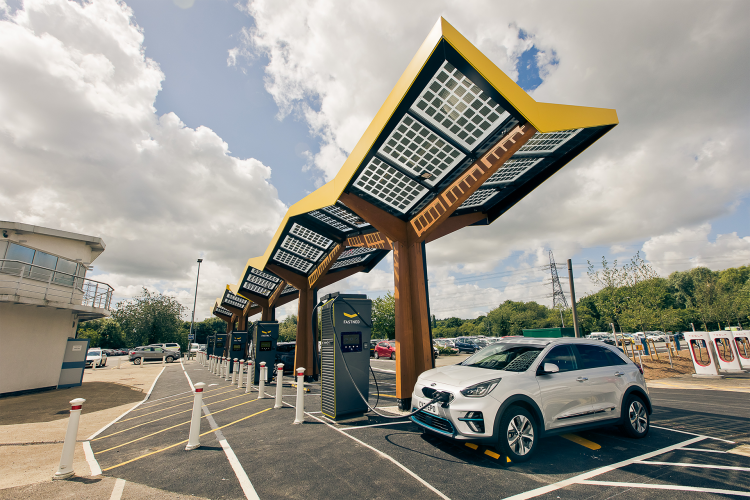 Pivot Power and partners have launched a 10 Megawatts rapid charging superhub in Oxford that can charge 42 vehicles at once.

The superhub at Redbridge Park and Ride has the capacity to charge 400 EVs. Oxford City Council has partnered with the low-carbon infrastructure provider, Fastned, alongside Tesla Superchargers and Wenea to open what they claim is Europe’s most powerful EV charging hub.

Pivot Power, part of EDF Renewables, developed this project as part of a nationwide network of energy superhubs by combining transmission-connected batteries and power infrastructure for EV charging.

The charging hub will be powered entirely by renewable energy and, as per the company’s estimate, will provide support to 36 million EVs expected on UK roads by 2040.

“Electric vehicles form a key part of our strategy to decarbonise transport,” Trudy Harrison MP, Transport Decarbonisation Minister said on the occasion. She said both the Government and industry are working together on such projects to help provide the infrastructure to support the UK’s electric revolution.

European EV rapid charging company Fastned has installed 10 charging bays at the superhub with 300 kW of power available each, capable of adding 300 miles of range in just 20 minutes for hundreds of EVs per day, the company said.

“We are looking forward to opening many more of our distinctive stations powered by energy derived from sun and wind, offering fast, reliable, consumer-friendly charging, across the UK in the coming months,” Michiel Langezaal, CEO of Fastned, said.

Wenea, one of the largest EV charging services providers in Europe, has deployed twenty 7-22 kW charging bays, it said. A further twelve 250 kW Tesla Superchargers will be available for Tesla owners, it added.

Jose Contreras, Head of Wenea UK said: “Transport decarbonisation will only be achieved through the collaboration of public and private transport. This project in Redbridge Park and Ride is the perfect example.”

Unlike any other UK charging hub, the site is directly connected to National Grid’s high voltage transmission network via a four-mile underground cable, which will deliver 10 MW of power to quickly and simultaneously charge hundreds of EVs without putting additional strain on the local electricity network or requiring costly upgrades.

Pivot Power can expand its network to key locations across Oxford to decarbonise public and private transport, taxis, and commercial fleets, it said. The move will support Oxford’s net zero 2040 target and provide infrastructure for the pilot Zero Emission Zone, a first-of-its-kind scheme that applies fees to any non-electric vehicle entering the central zone.

As part of the project, Energy Superhub Oxford also supports the decarbonisation of Oxford City Council’s fleet of maintenance vehicles. In total, Energy Superhub Oxford has contributed almost £900,000 towards the procurement of 40 EVs, including cars, vans, road sweepers, tipper trucks and the city’s first all-electric bin lorry, it added. The £41 million urban decarbonisation project delivered by Pivot Power, together with a consortium of global partners and part-funded by the UK government, will unlock significant emissions reductions across power, heat, and transport as part of the programme to decarbonise Oxford by 2040 – saving 10,000 tonnes of CO2 every year, equivalent to taking over 2,000 cars off the road, increasing to 25,000 tonnes by 2032.

The company plans to deploy up to 40 Energy Superhubs across the UK, with the next two projects already underway in Coventry and Sandwell, to the northwest of Birmingham.