Luxury saloon from Hyundai's premium brand gets the EV treatment

77 / 100 Overall
£65,805 inc VATPrice as Reviewed
Pros
Cons
Verdict
The Genesis Electrified G80 makes a very good case for itself. While it doesn’t quite match the refinement of German rivals, you need to consider whether that matters, given the level of extravagance you’re getting. It is arguably more exclusive than competitors, like the Porsche Taycan, any car from the Mercedes-Benz EQ range or the Tesla Model S. Furthermore, at (a not inconsiderable) £65,805, you're getting Bentley-esque looks for a fraction of the cost. At the same time, the interior is as opulent as it is functional. There is nothing to pay road tax-wise, while company car users will rejoice, given the Electrified G80 is in the lowest band. And although all-electric cars use relatively new technology, Genesis’ parent company, Hyundai, has one of the best reputations for reliability – exceeding BMW, Audi, and Mercedes-Benz. The Electrified G80 ticks all the right boxes – and it goes like hell as well.

Genesis is still new to the UK, but it’s got some serious backing. Its parent company is Hyundai, and it was one of Hyundai’s big saloons – called the Genesis – that initially spawned the decision to spin off Genesis into a brand.

Having Hyundai technology under the bonnet is no bad thing, then. But the powers that be decided that, if it was ever going to compete with the German premium marques, the Hyundai badge was too ‘middle of the road’ to generate the necessary appeal. 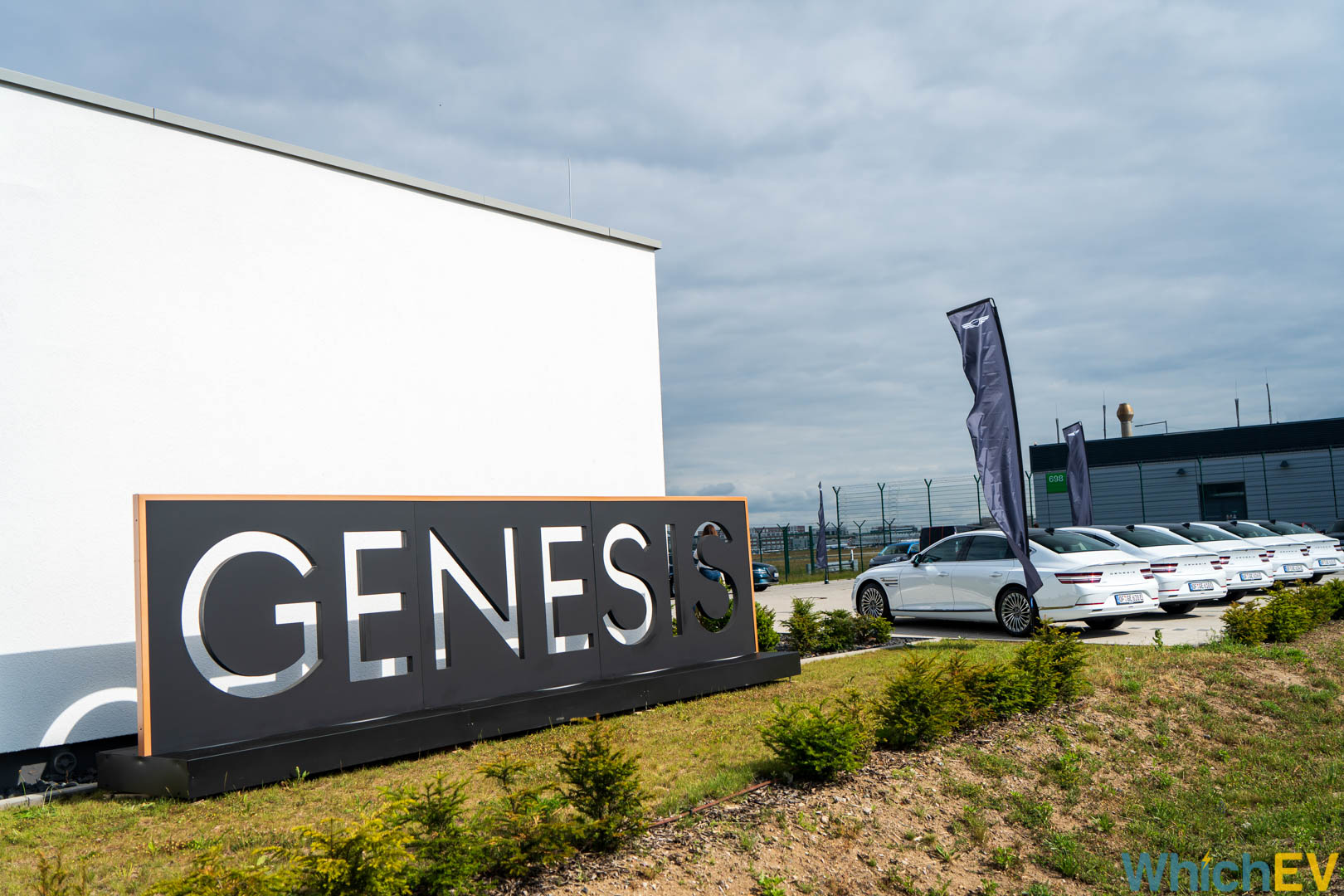 Along came the new brand – and its cars have wowed the motoring public since. Head-turning designs exist throughout its range, and the Electrified G80, a battery-powered version of the petrol G80, is no exception.

But how good is it?

The Electrified G80 costs £65,805, which is substantially more than the £41,650 you pay for an entry-level petrol G80. And, unlike the three trims in the conventional version – Premium, Luxury and Sport, you get a choice of Luxury or nothing. 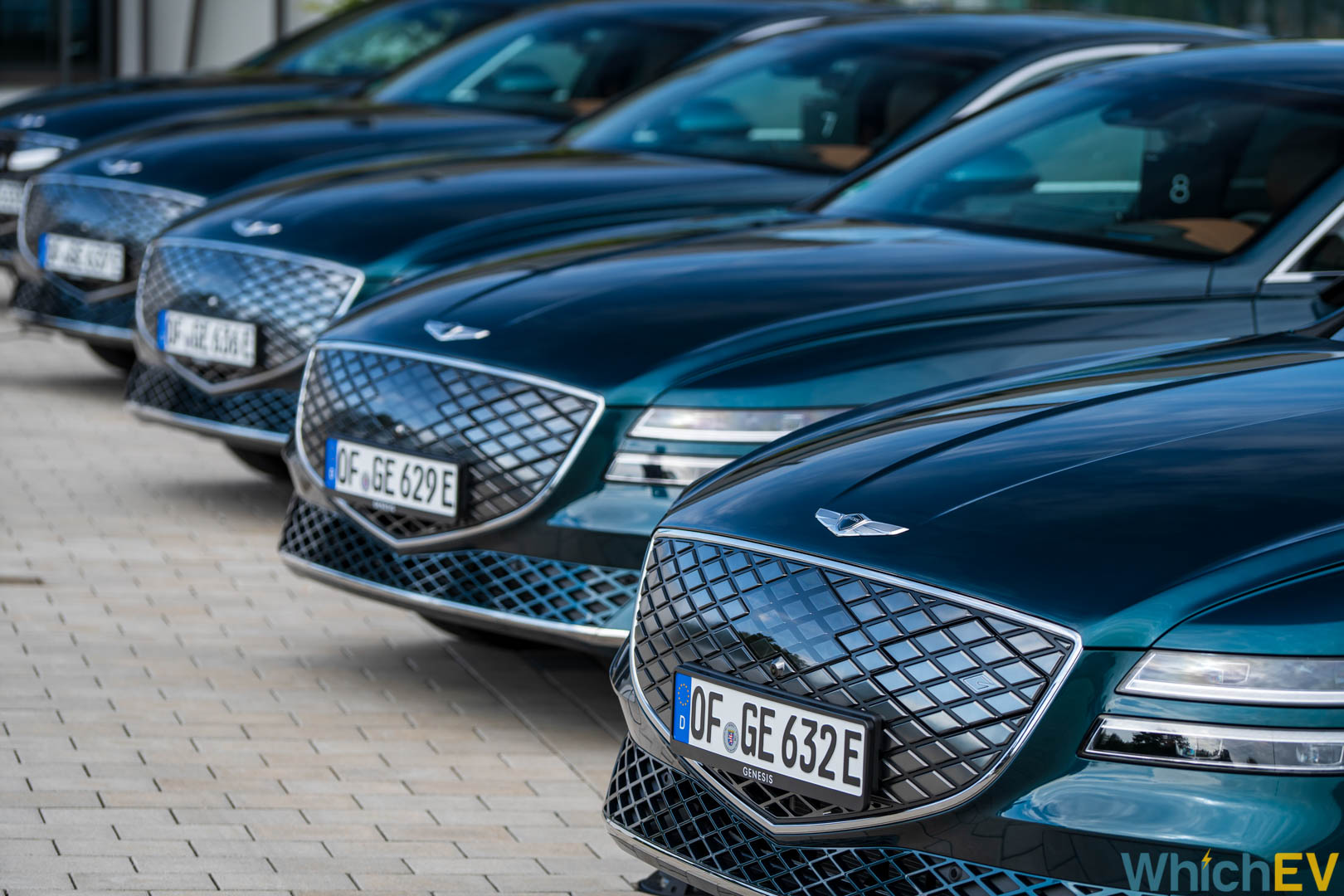 The Electrified G80 comes with 19in alloys, a 14.5in infotainment touchscreen with digital radio, Apple CarPlay/Android Auto, and voice control. You also get a 12.3in electronic instrument cluster, heated 12-way electric front seats, electronic control suspension and keyless entry/go.

In addition, Genesis says that a solar roof is available as an optional extra. Over a year, this can provide over 700 miles of range.

Other features, such as a heated steering wheel, heated rear seats, three-zone climate control and a powered tailgate, are options, too.

Like most cars in the Genesis range, the Electrified G80 looks stunning. The Bentley inspiration is clear to see – not just by the Genesis badge, which is indistinguishable from Bentley's at a distance – but also by the enormous front grille.

The grille is pointed at the bottom, which is the most obvious giveaway that it’s not a Bentley. But it screams luxuriousness, with four thin strips for headlights, two on each side. Meanwhile, the fenders are the same shape, sitting behind the wheel arches at the sides.

There is a notable crease, from which a shoulder bulges outwards towards the rear, while the back is far less ostentatious but no less beautiful. This is thanks, in part, to the slanted coupe-style roofline.

The interior is lovingly inviting, with comfortable seats that are great for motorway cruising. They are also bolstered enough to hold you in place in the bends if you dial up the throttle pedal on twisty roads.

While the interior isn’t as outrageous as some Genesis cars, the dashboard layout looks lovely and has a premium feel.

The cabin is spacious, too, and the visibility out of the front is good, thanks to the relatively thin pillars. This is not the case in the back, though, as the sloping roofline creates some meaty pillars. But helpfully, a rear-view camera is included.

There is a liberal amount of space in the rear, too. So, unless your passengers are well over six feet tall, there shouldn't be a problem.

Boot space is only 354-litres, though, reduced from 424-litres in the petrol version. That's not much more than a reasonably sized hatchback, and well behind a Tesla Model S.

The infotainment screen is crystal clear and one of the better ones we’ve seen. It is easy to use but comprehensive enough to keep you occupied if you enjoy playing with settings.

Apple CarPlay and Android Auto connectivity are factory-fitted, while there's a DAB radio and voice activation, which works reasonably well.

Thankfully, Genesis has resisted the urge to bury the climate control settings within the infotainment system. So, there are still physical dials, which display the temperature on a readout beneath the touchscreen.

The 370PS generated by the electric motors will grab the headlines. But it's the amount of torque that's the eyebrow-raiser.

Compared with the petrol-powered version, you get an extra 65PS, but torque measures at 516lb/ft, over 200lb/ft more than the fossil-fuelled G80.

As a result, the car accelerates rapidly, dealing with 0-62mph in just 4.9-seconds. What’s more, the throttle response feels instantaneous, so overtaking is a doddle. 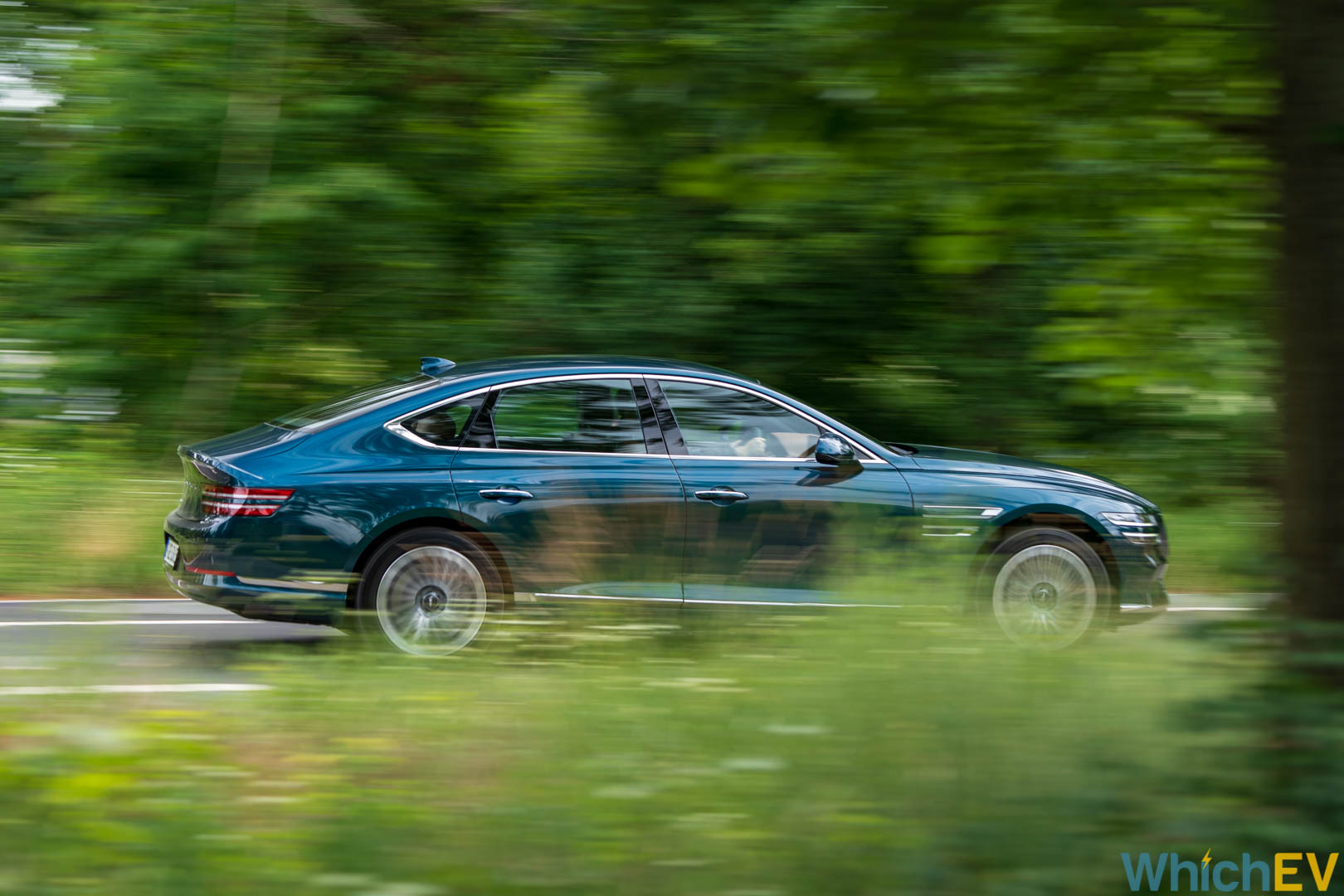 The handling is what you’d expect for a big car. It is good, but there's the traditional reluctance to swing itself into a corner on entry before the weight gets thrown to the side, threatening some oversteer on exit.

There is a respectable level of feedback from the steering, but the Electrified G80 isn’t a match for the likes of the BMW 5-Series.

Ride comfort is positive, helped by the suspension system. There is a camera in the front of the vehicle to scan the road ahead, so the suspension knows how to set itself up at any given millisecond.

The regenerative braking feels intuitive to use. Some electric cars can feel inconsistent, or as though the brakes are either ‘on’ or ‘off’. Not so the Genesis, which has refined its braking system well.

There is a trio of driving settings – Eco, Comfort and Sport. Eco limits the power to conserve the battery, while Sport does the opposite, as well as stiffening up the suspension and adding weight to the steering. Comfort is a good mix of the two, and we found ourselves using that mode most of the time.

The Genesis Electrified G80 has an 87.2kWh battery which is good for 323 miles of WLTP-rated range, according to the manufacturer.

Expect to achieve less than this in real-world British driving conditions, though. This G80’s range will, like all EVs, depend on factors such as road conditions, weather, ambient temperature, and your driving style.

The Genesis can use ultra-rapid 350kW charging stations, although you’ll be lucky to find a charging point in the UK capable of such rapidity. 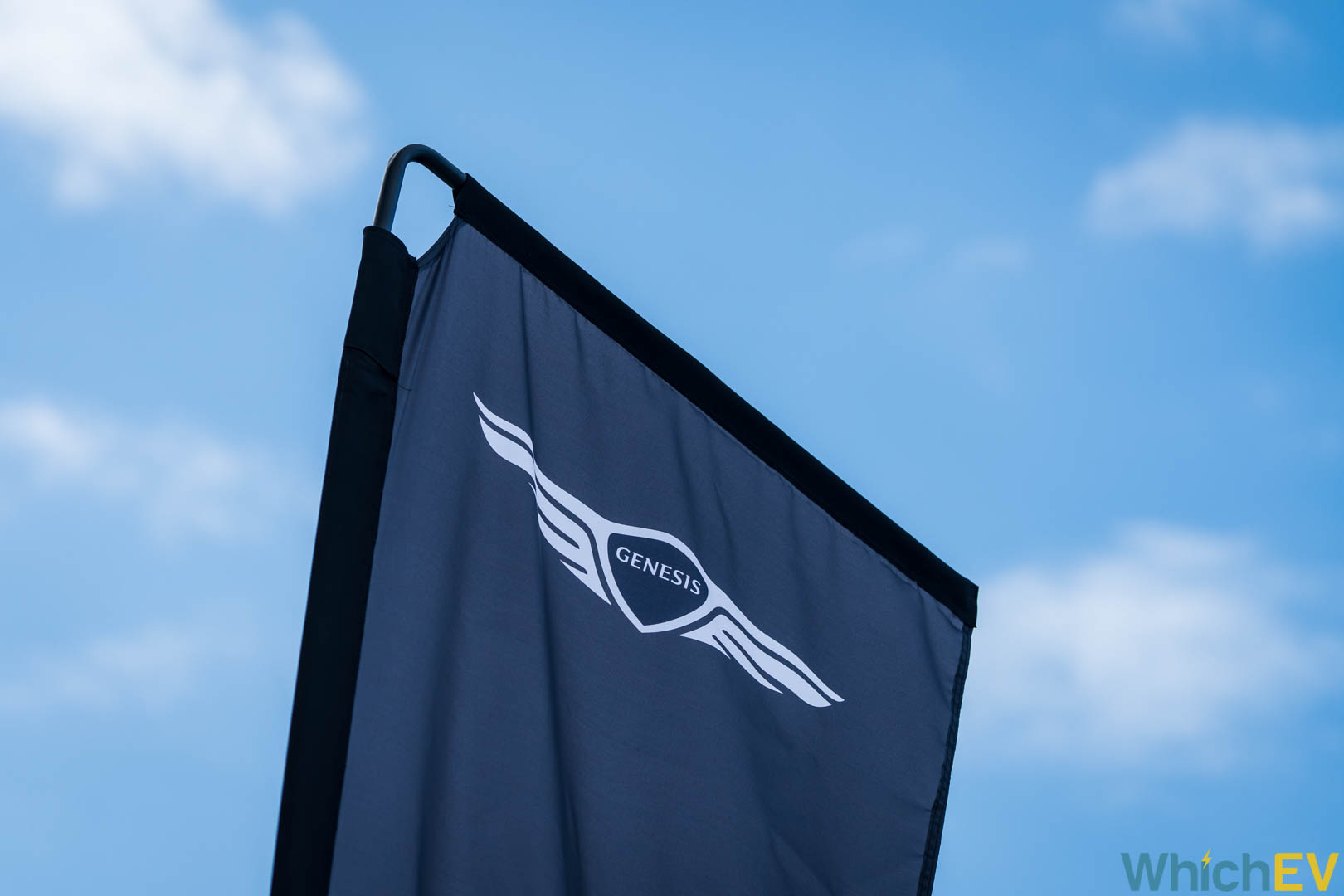 You can also power things from the car, using the vehicle-to-load ability. So, if you have a power cut at home, you could, theoretically, attach some cables to the G80 and run the kettle from it.

Despite electricity bills going through the roof, the Electrified G80 will save you money versus the petrol-powered version. However, that is offset by a significantly higher purchase price if you’re buying the vehicle outright.

There is nothing to pay for road tax, but it’s company car users who are likely to be licking their lips. Why? Well, zero-emissions mean the Electrified G80 is in the lowest band for benefit in kind (BIK).

There should be few problems with reliability given it's made by Hyundai, one of the best-rated manufacturers when it comes to dependability. The G80 is backed up by a five-year, unlimited mileage warranty, too.

Euro NCAP hasn't yet tested the Electrified G80, but the petrol G80’s rating will suffice. It was awarded five stars, scoring 91 per cent for adult occupants, 87 per cent for children and 91 per cent for safety assists.

*based on electricity costs of 29p per kWh