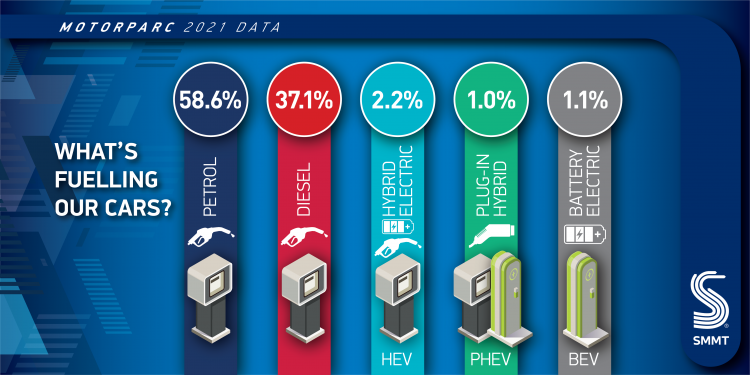 Use of EVs increased by 71 per cent to 748,349 vehicles, driven by growth in all sectors including cars, vans, buses and trucks, according to the new Motorparc data the Society of Motor Manufacturers and Traders (SMMT).

Though EVs now account for around one in five new registrations, plug-ins still only represent around one in 50 cars on the road, demonstrating the scale of the challenge ahead in convincing every driver to make the switch, the SMMT report said. Fossil-powered automobiles still account for 95.7 per cent of the total registered vehicles, including 20.5 million or 58.6 per cent petrol cars and 13 million or 37.1 per cent diesels.

Britain’s favourite car types are supermini and lower medium car segments, which account for nearly six in 10 cars in service. Manual transmission accounted for 68.1 per cent of the car fleet.

Explaining, the SMMT said pandemic-related market disruptions lead Britons to hold on to vehicles for longer, as the average car reached a new high of 8.7 years old – more than a year older than a decade ago. Despite the increase in the fleet, major shortages of key components – most notably semiconductors – and supply chain disruptions across the globe caused new car registrations to remain broadly static at 1.65 million, it added. The lockdowns of the past two years meant consumers were not able to buy new cars, and instead held on to their vehicles.

However, a bumper year for light commercial vehicles, which saw the number on the road rise by 4.3 per cent to 4,804,833, contributed to an overall increase in the fleet. In the commercial vehicle sector, some 0.6 per cent of vans are now plug-in electric, indicating that the van sector is around two years behind that of cars despite both vehicle classes having the same end of sale date for new petrol and diesel registrations.

Zero-emission public transport is picking up pace, with 1.3 per cent of buses and coaches now battery electric, while electric trucks account for less than 0.1 per cent of the HGV parc, as the development of unique zero-emission technology for these vehicles continues.

Mike Hawes, SMMT Chief Executive, said: “The first consecutive annual fall in vehicle numbers in more than a century shows how significantly the pandemic has impacted the industry. With fleet renewal essential to net zero, we must build consumer confidence in the economy and, for drivers, confidence in the charging infrastructure to get the transition into top gear.”