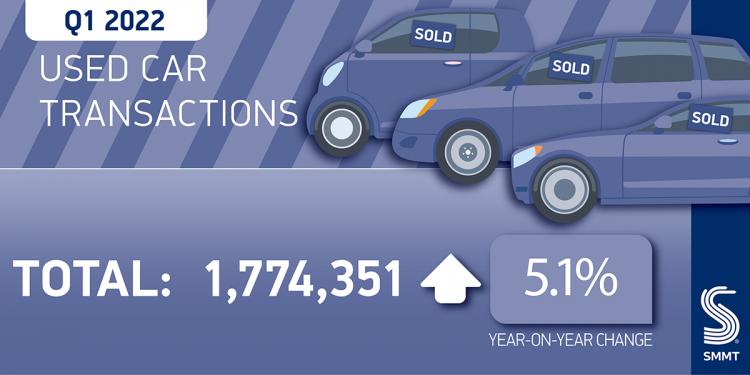 Britain’s used car market grew 5.1% in the quarter ending March 2022 as the global chip shortage continued to stifle the supply of new EVs, according to the latest data from Society of Motor Manufacturers and Traders.

The SMMT said nearly 1.8 million transactions took place in the outgoing quarter. This translated to 86,596 additional cars changing hands compared with the corresponding period of 2021, when the pandemic-induced lockdowns forced car showrooms across the country to shut down and allow only click and collect transactions.

One in five cars changing hands was black, making it the most popular colour choice followed by blue and silver or aluminium. Pink accounted for the smallest number of cars sold.

“With the new car market hampered by ongoing global supply shortages, growth in the used car market is welcome, if unsurprising especially given we were in lockdown last year,” SMMT Chief Executive Mike Hawes said.

As the global shortage of semiconductors stifled supply of new inventory, used car sales remained buoyant in January and February, rising 17.7 per cent and 7.4 per cent respectively. However, March saw a decline of 6.8 per cent. The 5 per cent quarterly growth, used car transactions remained 12.2 per cent below the pre-pandemic year of 2019.

According to the SMMT data, it was a record first quarter for used battery electric vehicles (BEVs), with buyers keen to purchase pre-owned zero-emission cars. Transactions for BEVs more than doubled from 6,625 to 14,586, an increase of 120.2 per cent.

Despite the growth in BEVs transactions, petrol and diesel powertrains continued to dominate the market accounting for 96.2 per cent of used car sales, that is some 1.7 million units changing hands. The market share of plug-in vehicles comprised 3.6 per cent, more than doubled from 1.6 percent in the same quarter last year. This illustrated that the growth in new EVs over the past two years has yet to have a significant impact on the overall market, the SMMT said.

Superminis remained the most popular used buy, followed by lower medium and dual purpose, with these three segments accounting for more than seven in 10 of all cars finding new owners, the SMMT said.

“Although there is some way to go before we see the recent growth in new EVs replicated in the used market, a buoyant new car market will be vital to help drive fleet renewal which is essential to the delivery of carbon savings,” said Hawes.