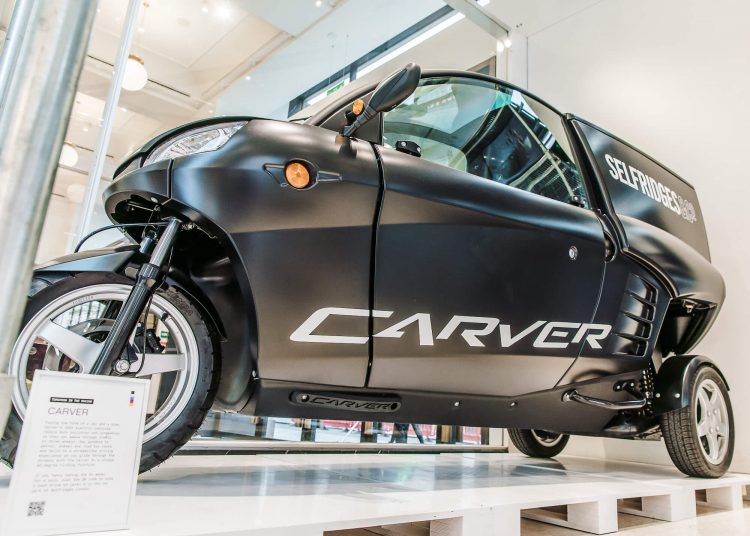 Carver Electric has announced that its new three-wheeled all-electric scooter will go on display and be available for test rides at Selfridges’ four UK stores in April.

Commuters and businesses can try out the 50mph EV at Selfridges stores in London and Birmingham, as well as its two stores at Exchange Square and the Trafford Centre in Manchester from 4 to 30 April 2022.

There are two versions going on display. The Carver S+ has a 60-mile range and the Carver R+ can do 80 miles between charges. According to the firm, the Carver can travel 60 miles for less than £1.

Both variants are available as a two-seater, or as a Cargo version that packs 500 litres of storage space making it suitable for businesses.

Just one metre wide, the Carver can nip through traffic, but with more stability than a two-wheeled scooter.

Occupants are protected whatever the weather thanks to a roof, windscreen and doors. It has a steering wheel, automatic gears, and a patented tilting mechanism to effectively navigate corners.

Being an EV means the Carver is exempt from London’s Ultra Low Emission Zone (ULEZ) charge and Congestion Charge for non-compliant vehicles.

“With rising fuel costs, concern over local air quality, worries about climate change, and worsening congestion in our cities, there has never been a better time to buy an electric Carver,” said Carver Electric director William Keene. “With a two-seater model that’s perfect for commuting, and a Cargo version that’s ideal for last-mile deliveries, the three-wheeled Carver promises huge savings on running costs.”