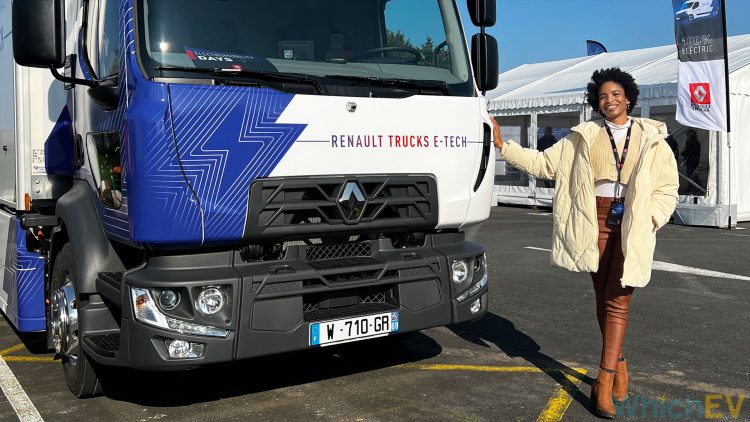 To celebrate the launch of Renault's broad range of fully electric trucks, WhichEV journeyed to Blainville-Sur-Orne in north west France for a tour of the home of the French truck industry and to see the new Electric Mobility Factory. With ULEZ penalties set to increase for many cities across the whole of the UK – and the Government's decarbonisation plan set to ban light (under 3.5 tons) petrol and diesel vans by 2030 with a full ban by 2035 – has the time has come for heavy commercial vehicles to switch to clean energy?

Blainville has been built as a sustainable factory with an investment of €200 million over 10 years. It has the biggest truck production capacity in Europe and has been designed to use 50% less energy and water than traditional plants. It uses 100% renewable energy and has been certified as a ‘Zero Landfill' site.  This factory represents Renault's dedication to the ‘1.5 degrees' scenario, which is the generally agreed maximum amount of global warming that our planet can experience without catastrophic consequences.

As well as the battery electric vehicles on show today, Renault will also pursue a development plan to use Green Hydrogen for a range of Fuel Cell EV (FCEV) vehicles. Unfortunately, with the lethargy being shown by the oil companies, we're unlikely to see large scale supply of Green Hydrogen before 2030.

Renault's experts presented data on the likely carbon footprint of a 16 ton truck running for 560,000km over 14 years. When comparing costs as well as environmental impact, Renault's comparisons took into account that none of the scenarios would have ‘Trucks with a resale value' and they allowed for a battery swap half way through the vehicle's life. Looking at the transport cost per ton (of cradle-to-grave CO2), when compared to a traditional diesel truck, the battery models win by a mile.

For city delivery, there really is no alternative. Battery Electric Vehicles (BEV) are the right choice, both from a cost and environmental point of view. The closest alternative to a BEV is the Fuel Cell and the energy efficiency is where the hydrogen argument for broad adoption dies. While Renault BEV trucks can hit around 62% efficiency, the figures for hydrogen fuel cells are down around 18%. That's a lot of waste.

Leaders inside their trucking divisions, including UK Managing Director Carlos Rodrigues, believe that – by offering the best product, with the best service and satisfaction levels – Renault has cemented a number one position. When Renault announced its far-reaching partnership with Volvo back in February 1990, the deal did not take into account the huge resources that would be made available when Volvo joined with Chinese giant, Geely.

Alongside the trucks that we drove on the day, Renault also announced a pair of 44 ton giants in the T and C variants of from the E-Tech range. Each will go on sale at the start of 2023 and we'll report more details on these in a separate article.

The message from Renault is clear: In the absence of large scale availability of Green Hydrogen, battery powered trucks represent the planet's best chance of meeting crucial environmental targets.

As production ramps up for the various models, there is now a viable option from 3.5 to 26 tons – with multiple 40 ton options in the new year.

Candela C-8 electric boat gets the power of Polestar 2