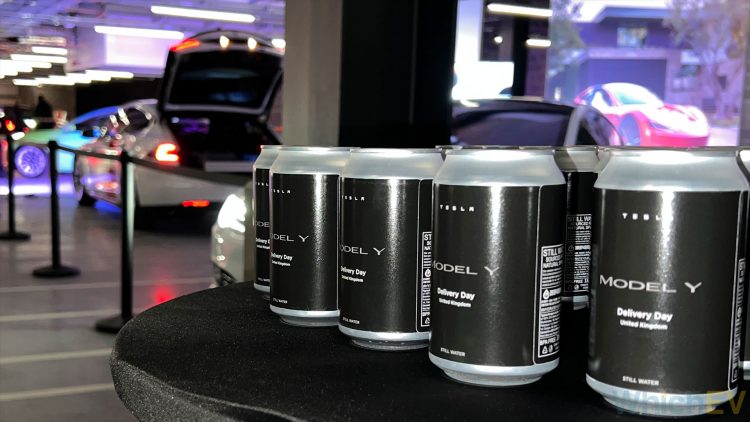 With UK temperatures starting at a little over zero in the wake of storm Eunice, WhichEV joined hundreds of smiling new owners at the Horizon building on Southampton's Dock 10, as the first of the UK's Tesla Model Y orders were lined up for collection. Given that the Cybertruck was announced for pre-order around the same time as the Model Y (which we reviewed in November 2021), the ramp up on production for this beefed-up 3 has been impressively fast. Was it worth the wait?

The first pick-ups were scheduled for 8am, but new owners had been arriving since just after 6am. The cargo vessel had docked a couple of days earlier, giving plenty of time for the cars to be unloaded, checked, polished and put under cover at the nearby multi-story car park.

As we arrived, the best part of £3 million in shiny new Model Ys were parked at the front of the reception building. A nice touch was the positioning of the new police Model 3 at the entrance, complete with electric yellow patches and flashing blue lights.

The customers we spoke to were very happy to be getting their Model Y and there was a definite sense of ‘belonging' as they grouped together – sharing stories. The outer parking zone (where visitors had dropped their own cars), was a mix of older Teslas, luxury cars and a smattering of normal vehicles. Several people we spoke with told us that the Model Y would be their second Tesla and many were about to become ‘two Tesla households'.

Through the curtains, we went up the escalator where the second floor of the Horizon building had been divided into distinct areas:-

Once the paperwork for each group had been completed, it was time to descend into the ‘Tesla Experience Zone', which included a mixture of Tesla cars, usage scenarios, cup cakes and tech-deep-dives.

A sizeable second chamber hosted a large presentation screen where a 7-minute overview/breakdown of the Model Y filled in any blanks that prospective owners might have missed, before going through to the key pick-up area. Accounts were set up (as needed) and customers were led out to their new cars – ready to drive off.

At the start of 2019 Tesla unveiled its Model Y hatchback and, around one year later, deliveries began in the USA. However, the first UK Model Y cars were scheduled to roll off the line at Gigafactory 3 in Nanhui New City (30km south of Shanghai), which – at that time – was nowhere near ready for mass production. While the 210-acre site had been optimistically prepared for a future where it can assemble close to half a million vehicles a year, a lot of work was needed to get it ready. Yesterday's delivery shows that the Shanghai plant is not only up and running, but that it might actually take the lead in quality control for the whole organisation.

In October 2019, WhichEV reported on the results of a 5,000 owner survey that Bloomberg had run into Tesla owner's satisfaction levels. Knowing that production levels were about to ramp up fast, and with new Gigafactories planned across the world, it seemed that Musk was keen to understand what he had to do better – if he was to improve customer happiness and retention levels. We've had one of the new Model Y cars for a while and it's spot on in terms of build quality.

We stopped at a 250kW Supercharger on the way back and there is a ‘hard to beat in any other vehicle' sense of satisfaction as you watch the Model Y peaking with a charge rate of close to ‘450 miles per hour' while you grab a coffee, use the facilities and relax.

We look forward to similar events for the Roadster, Semi, Cybertruck and other (rumoured) models.
.