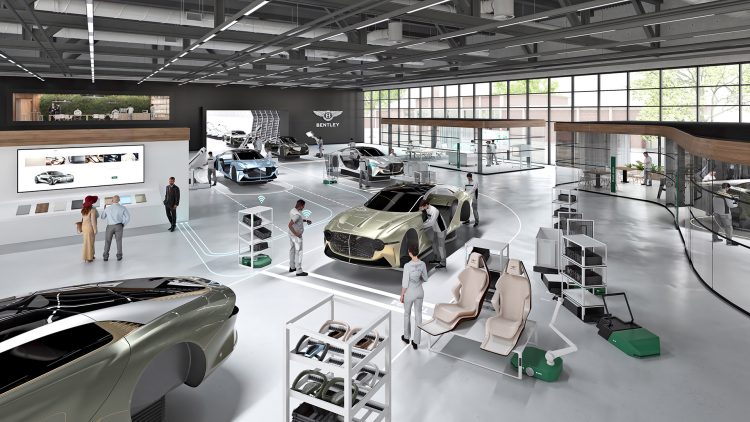 Bentley Motors has announced that it is going electric having secured UK production of its first BEV, which is due to roll off the production line in 2025.

The EV will be built at the British manufacturer’s Crewe plant and is part of the company’s new pledge to invest £2.5 billion in sustainability over the next ten years.

This represents a critical first step for the luxury brand’s Beyond100 strategy – a plan launched in 2020 to ensure Bentley is carbon neutral and exclusively electric by 2030.

The investment will completely transform Bentley’s product portfolio and turn its Crewe campus into an “industry-leading greenfield facility”, which it calls the new “Dream Factory”, said Bentley in a company statement.

“Beyond100 is the boldest plan in Bentley’s illustrious history, and in the luxury segment,” said Adrian Hallmark, chairman and chief executive of Bentley Motors.

“It’s an ambitious and credible roadmap to carbon neutrality of our total business system, including the shift to 100 per cent BEV in just eight years.”

“Our aim is to become the benchmark not just for luxury cars or sustainable credentials but the entire scope of our operations. Securing production of our first BEV in Crewe is a milestone moment for Bentley, and the UK, as we plan for a long-term sustainable future in Crewe.”

Peter Bosch, board member for manufacturing at Bentley Motors, added: “Today is arguably the most important day in Bentley’s modern history, and is a testament to the hard work and skill of our colleagues in Crewe.”

“We are already marking the pinnacle in luxury car production and have already transformed our factory to become carbon neutral, with industry-leading environmental credentials. With our new ‘Dream Factory’ concept, we now go to zero also with water, waste and other environmental impacts until 2030.”