26% of car sales in December 2021 were electric, says New AutoMotive 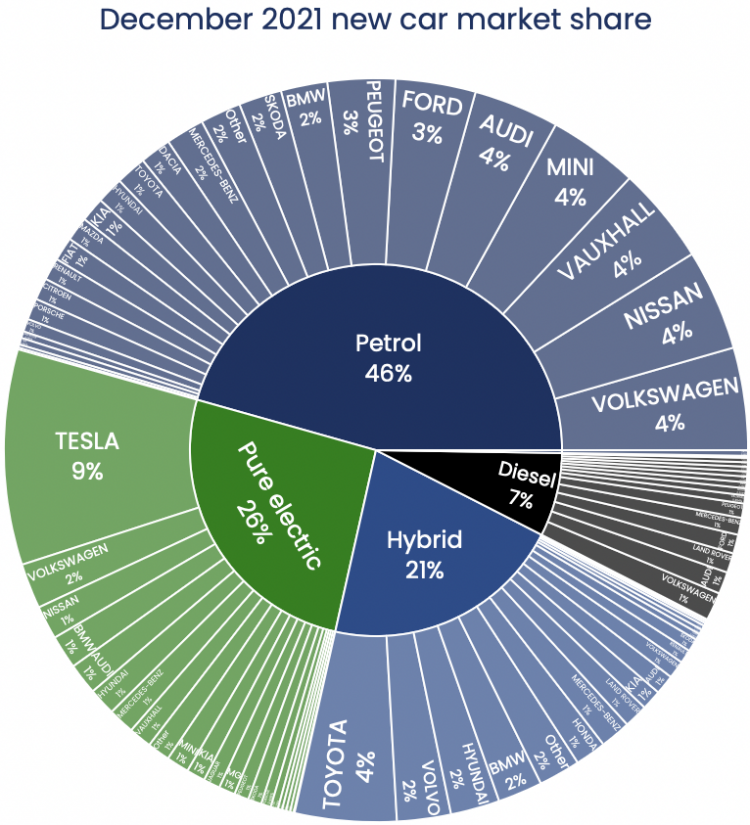 Pure electric cars outsold hybrids for the first time on record in December, jumping to second place in the list of most popular fuel types in the UK, according to data from New AutoMotive.

The share of petrol cars fell below 50% of the market for the first time since 2016.

Breaking this down by region, Oxford was an EV hotspot in December taking a 40% share of new car sales. Newcastle came second with 31% and Kent was third with 30%.

The marque that dominated sales in the UK last month was Tesla. New AutoMotive said that this was the American automaker’s biggest ever month for UK sales, capturing 36% of all new electric car sales. Volkswagen and Nissan came second and third respectively.

Looking at the year as a whole, new electric cars were the fastest growing segment of the market with 180,000 sold in total. Petrol and diesel fuel types on the other hand continued to decline, while hybrids stagnated.

Commenting on the data, Ben Nelmes, head of policy and research at New AutoMotive, said: “Last year saw continued enormous growth in the number of EVs registered as UK motorists increasingly fell in love with electric cars. People across the country discovered the benefits of switching to electric cars, from the cheaper running costs to better environmental performance.”

However, while EV registrations continued to rise, electric cars represented just 1% of all the UK’s 32 million passenger cars at the end of 2021.

Mr Nelmes said: “The extra 180,000 electric cars on the road in 2021 is small compared to the 32 million polluting cars on the road. To reduce emissions, local authorities should accelerate the implementation of clean air zones, promote modal shift and active travel alongside electric cars where appropriate.”

In March, Bath’s Clean Air Zone (CAZ) came into effect followed by Birmingham’s in June. Then in October, London expanded its Ultra-Low Emission Zone up to the North and South Circular roads and in November Portsmouth’s CAZ went live.

The parent car companies that saw the most progress towards all-electric sales in 2021 overall were Geely, Mazda and Daimler. These companies sell Volvos, Polestars, Mazda, Mercedes-Benz and Smart cars.

The three companies that sold the fewest electric cars in 2021 were Ford, Jaguar Land Rover and Honda.

BMW shows off its new electric iX M60 with 611bhp