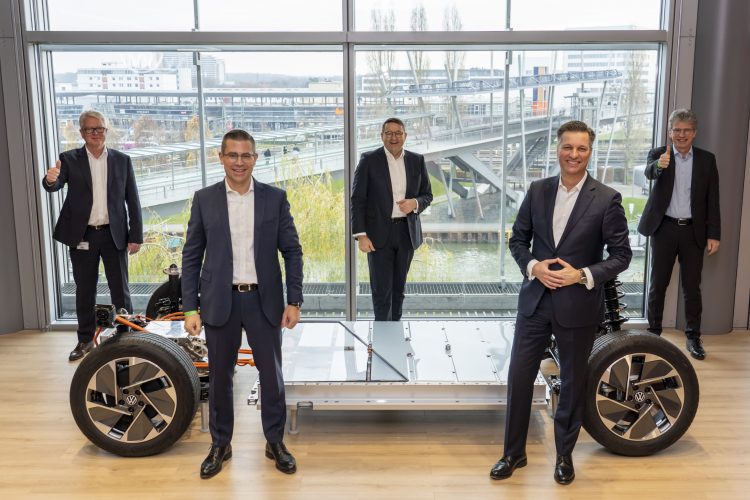 These partnerships are with Umicore, a leader in clean mobility materials, the battery specialist 24M Technologies and lithium producer Vulcan Energy Resources.

Initially, Umicore will supply 20 GWh for Volkswagen’s gigafactory in Salzgitter, Germany from 2025. By the end of this decade, Umicore hopes to supply up to 160 GWh, which is enough to power around 2.2m BEVs every year. Another key part of the joint venture is to secure responsibly sourced raw materials in Europe at competitive prices. All proposed approaches however are still subject to regulatory approvals.

Volkswagen’s partnership with 24M Technologies is so that the automaker can develop cutting-edge production technology for its cell plants.

Based in Cambridge, Massachusetts, 24M has a low-cost, space-efficient battery cell manufacturing process that is an improvement over the dry coating process, which Volkswagen plans to industrialise. The plan is to reduce material usage and remove several steps from the conventional production process thereby making it more cost-effective.

Beginning in 2026, Australian firm Vulcan Energy Resources will supply Volkswagen with CO2-neutral lithium from the Upper Rhine Valley in Germany. This binding contract will ensure Volkswagen is supplied with lithium hydroxide for five years, securing demand for future in-house cell production both in Germany and Europe.

Thomas Schmall, Volkswagen group components chief executive, said: “Volkswagen is implementing its battery strategy very consistently and at a high pace. Volkswagen’s unified cell must be at the forefront of performance, costs, and sustainability right from the start. With our new partners, we are one step closer to reaching this goal. Together, we will focus on key parts of the battery value chain and develop cutting-edge technologies.”