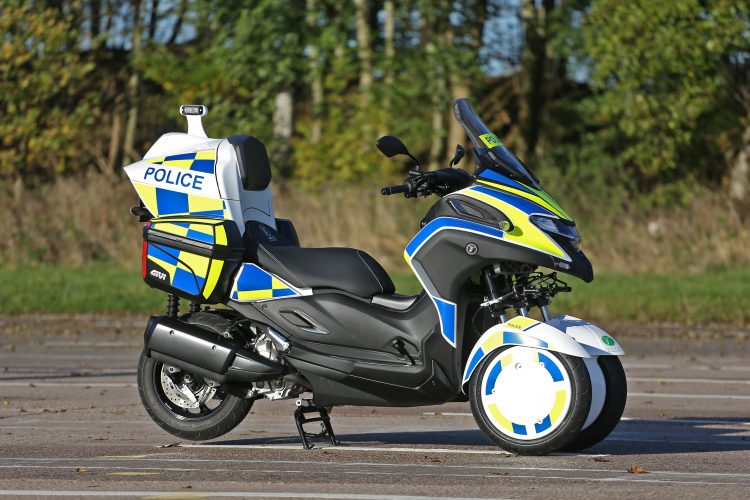 Developed in partnership with Northamptonshire police force, with guidance from the Northants police chief constable and UK police lead for motorcycles Nick Adderley, the three-wheeled scooter will help emergency services do their part in tackling climate change.

Said to reduce carbon emissions by up to 50%, the WMC300FR first response vehicle needed to be fast, but it also had to have significant range, while reducing CO2 footprint and running costs for emergency service fleets.

It is based on the Yamaha Tricity 300 and uses the same 292cc single-cylinder motor, but features two 56V 12ah lithium ion batteries produced by EGO Power Plus.

The batteries can be “fast charged in multiples of 6 from a standard three-pin plug, removing the need to wait during re-charge,” said WMC in a statement.

However, what really sets the vehicle apart is its drag reduction aerodynamic features, which WMC has spent almost three years researching.

WMC’s patented Venturi Duct has been installed on the first responder, which reduces drag by pushing air through the vehicle as opposed to around it. To aid this system, WMC has installed aerodynamic front fenders that funnel air towards the venturi, reducing the amount of frontal resistance.

The WMC300FR was funded in part by grants from the government’s Office for Zero Emissions Vehicles (OZEV), Advanced Propulsion Centre (APC) and Niche Vehicle Network (NVN).

Chief executive of WMC Rob White said: “As the recent COP26 summit highlighted, we are still at the beginning of a revolution in aggressive carbon reduction and this global shift in thinking presents a unique opportunity to think radically about motorcycle design, finding the most efficient and cleanest way to power the future of transport.”

Mr White added: “Whilst our concept in its most extreme form will help us go faster, its real-world application is all about improving range and reducing down time – major considerations in the electric vehicle industry at present.”