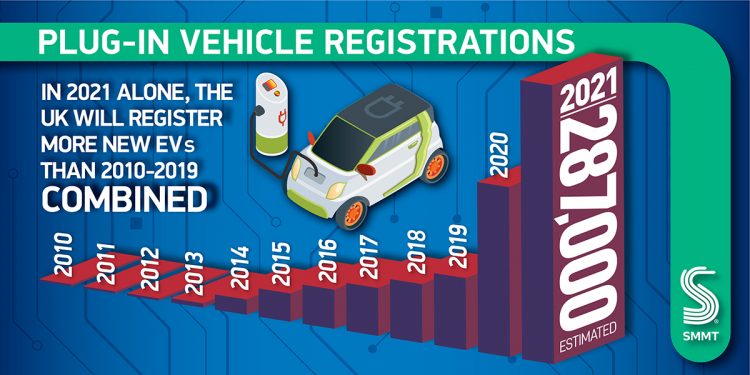 The number of businesses and consumers purchasing plug-in vehicles has grown at such speed that more will join Britain’s roads in 2021 than in the last decade combined, according to the Society of Motor Manufacturers and Traders (SMMT).

Between 2010 and 2019, a total of 271,962 BEVs and PHEVs were registered while in 2021 alone, the SMMT forecasts that around 287,000 of the latest plug-in vehicles will be sold. The same forecast also predicts that BEV registrations will outsell diesel cars by the end of next year. 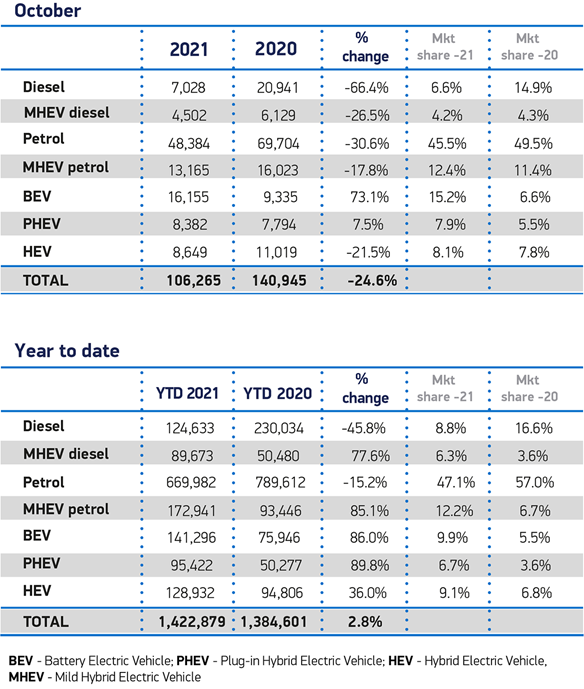 The SMMT describes the growth as “remarkable” given the global shortage in semiconductors impacting vehicle production and says manufacturers are doing all they can to ensure EV availability.

According to the SMMT the growth in EV take-up is down to the wide choice of vehicles on the market, a growing public acceptance, and an increase in incentives.

“Our latest outlook shows the UK experiencing a surge in plug-in vehicle uptake. Massive investment by industry as well as longstanding government incentives have seen us go from just 188 new plug-in cars in 2010, to almost 300,000 in 2021,” says SMMT’s chief executive Mike Hawes.

These government incentives include tax breaks and grants for businesses that have invested in EVs. This has meant that around two in every three new BEV registrations in 2021 have been for large fleets.

Although the electric market has performed well, new car registrations last month fell by -24.6% to 106,265 units compared to October 2020, making this the worst October month since 1991. Most of this decline was driven by large fleets as their demand fell by -40.4% whereas private decline was just -3.3%. 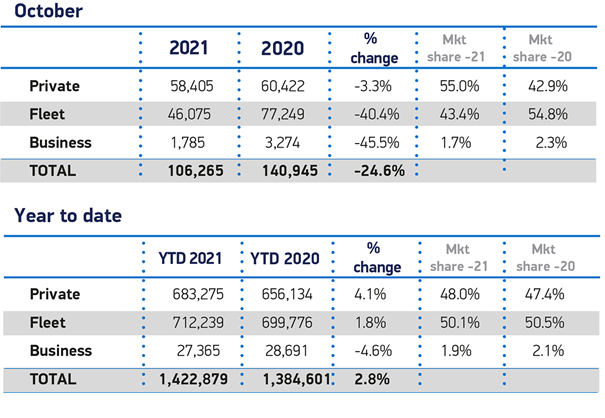 All vehicle classes declined except the mini category, but this is known to be a low volume segment and so is usually volatile. The three most popular vehicle categories that increased its market share were lower medium at 30.7%, supermini at 30% and dual purpose at 26.6%. 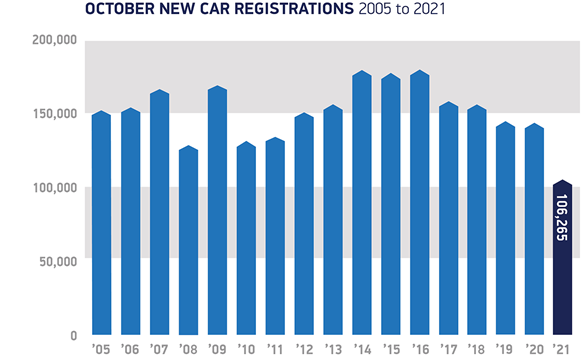 Mr Hawes added: “Electrified vehicles, however, continue to buck the trend, with almost one in six new cars registered this year capable of zero-emission motoring, growth that is fundamental to the UK’s ability to hit its net zero targets. With next year looking brighter, and even more new models expected, the continuation of this transition will depend on the preservation of incentives that overcome the affordability barrier, and the ability of the public and private sectors to increase public on street charging to allay EV driver concerns.”