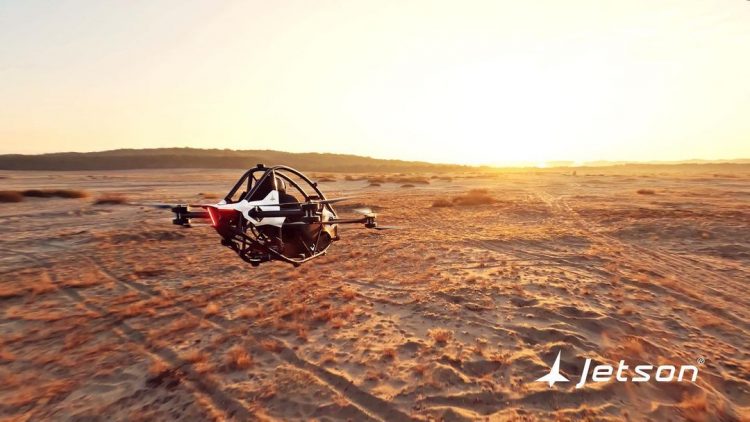 Not only is the future likely to be electric. It could also potentially be airborne. At least, that is, if a number of prototype flying EVs currently undergoing testing have anything to do with it.

“Have you ever had a dream where you could fly? This was it,” says Jetson, a Swedish startup that has officially unveiled its Jetson ONE personal electric aerial vehicle.

After a successful prototype in 2018, the company built a consumer-friendly version of the ONE eVTOL, which has already sold out its limited production run for 2022, and is now taking orders for 2023.

Priced at $92,000, it has eight electric motors, can go up to 63mph, and can stay in the air for up to 20 minutes. To ensure customers are safe when operating the vehicle, Jetson has installed features including a race car-inspired spaceframe, a ballistic parachute with rapid deployment, as well as hands free hover and emergency functions.

Jetson’s aim is to make the skies accessible to everyone so that we can all be pilots. The name comes from the popular 1960s animated TV series The Jetsons about a family living in a futuristic metropolis where commuters whizzed around in flying cars.

But it is not just Jetson who are developing eVTOL technology. In fact, there are more than 150 different companies around the world that are building their own flying cars.

Uber and Boeing, for instance, are both building flying taxis, and according to one report, there will be 430,000 such vehicles operating globally by 2040.

One of the leaders in air taxi operations is California-based firm Joby Aviation, which has already carried out over 1,000 test flights of its eVTOL vehicle. It hopes to get regulatory approval from the Federal Aviation Administration (FAA), with the intention to begin commercial flights in 2024.

This vehicle carries up to four passengers, has a range of more than 150 miles and can reach speeds of up to 200mph.

Oliver Walker-Jones, a spokesperson for Joby told the BBC: “We envisage offering our aerial ride-sharing service from locations near to where people live, work and want to go.”

For flying taxis and personal eVTOL vehicles to share airspace will require lots of mini-airports known as ‘skyports’.

In the UK, the government has backed the launch of the world’s first airport and charging hub for eVTOL aircrafts called Air-One that is due to open in Coventry.

Designed by Urban Air Port, the company hopes that the zero-emissions facility will be replicated around the world to reduce road congestion.

Airspeeder is also developing a flying racing car called the Alauda Mk3 for a race series expected to debut later in 2021.