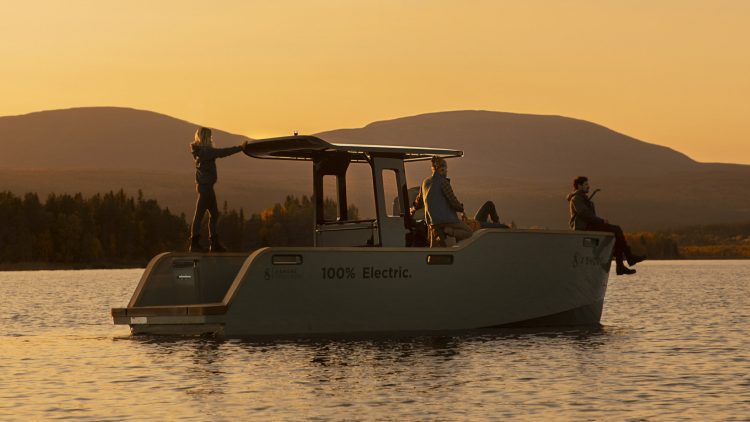 Around 90% of the goods transported across the planet are sent on ships. Normally, this is using massive diesel engines that produce pollution at a scary rate. If shipping was a country, it would be the 6th biggest generator of CO2 emissions. Europe and allied countries have been pushing for a large-scale reduction by 2050, while major oil producing nations like Saudi Arabia think that a much slower cut-back plan would be better. The International Maritime Organisation (IMO) has now requested improved data on pollution, but that still leaves the question of viable alternatives. Konrad Bergström, Founder and President of X Shore, has a strong vision for the future of the high seas and has done so for more than two decades. Now the technologies have caught up with his vision and funding has started to pour in. WhichEV explores the possibilities.

Back in 1996, Bergström began to formalise his ideas for a world where sea traffic would be powered by electric motors. As he trademarked the name X Shore, he know that neither the technology nor the customer demand existed. To pass the time, he set up Zound Industries, licensing the ability to sell Marshall headphones and speakers. It became one of the fastest growing companies in Sweden and allowed him to invest in new ideas for X Shore.

Batteries, motors and hulls have all developed and you can now buy the X Shore Eelex 8000 with a range of close to 100 nautical miles and a top speed of 35 knots. The liquid cooled 225kW electric motor provides the speed, while a 120kWh battery gives you the juice necessary to drive the eight-metre boat forward. While it does support DC rapid charging up to 100kW (20-80% in 40 mins), a commercial 3-phase charger will give you 80% in three hours and a flat-to-full experience in around six hours. How much will you save in running an electric boat vs a conventional fossil-fuel craft?  Around 90%, according to X Shore.

There's also a matching watch available that, naturally, allows you to lock/unlock your boat as well as triggering a variety of SOS warnings should you fall overboard. Given Konrad's background with high-quality audio systems, you can also add in a waterproof/UV resistant sound system to help you party at sea. If you'd like to fantasise further, there's a 52 page brochure available online.

Given that his grandparents were sailors and fisherman, it's easy to see why he has ‘sea water in his veins'. When we spoke with Konrad last summer, he was looking to expand his operation. Sales were doing well in the Nordic countries and he'd just begun to develop his channel in to the Middle East, but Konrad's eye was definitely on the rich, boat-loving market around the major cities of the USA's Eastern sea board.

So what will Konrad & Co be using the $17m funding injection from Team Europe for?

“X Shore is a perfect partner for our multi-modal electromobility approach,” said Lukasz Gadowski,
CEO of Team Europe. “Our common aim is to create a global leader and a large independent
company in the boat industry that attracts customers and talents worldwide.”

Following the launch in the United States, X Shore plans to utilise its new funding to expand production and open a second factory in Sweden. X Shore will also continue software development of future features, including auto-docking, an important first step towards autonomous driving. The company will also begin recruiting a US-based team, with a view to setting up an American production centre before the end of 2022. A key part of Konrad's ethos is that everything should be approached with a ‘carbon neutral' mentality. That means sourcing materials locally where possible.

What will his customers be using X Shore boats for?

Well, his designs are flexible. As Konrad says, “The modular interior layout system lets you set the tone. One day you may want to have a fishing boat and the next day you may want to go diving or hit the adrenaline by converting your craft into a wakeboard/water-ski boat. How about silently cruising watching the wild-life, followed by a romantic candle-lit dinner?”  The X Shore site already includes options for dining and diving as add-ons to the basic vessel.

Long term, can this kind of technology help to reduce the shipping industry's dependence on high-polluting fuels?

It won't be easy, but when you look at how road transport has developed in the 13 years since Tesla first put its first car on the road, there has to be some optimism that electric boats can replace local/regional boats over the next couple of decades.

To really make a difference, the IMO and associated bodies would need to be prepared to ramp up fines/charges for water-bound vehicles with high levels of pollution.

Every year, even a country as small and forward-thinking as Sweden manages to burn through 32 million litres of fuel – which is the equivalent of 19,000 flights from Stockholm to Bangkok. Cheap engines on boats can dump as much as 40% of the fuel intake – without burning it. The X Shore approach might lead to a better maritime world in itself – or it might just inspire a better solution. Either way, we will be following Konrad's progress closely and reporting back on any significant milestones.