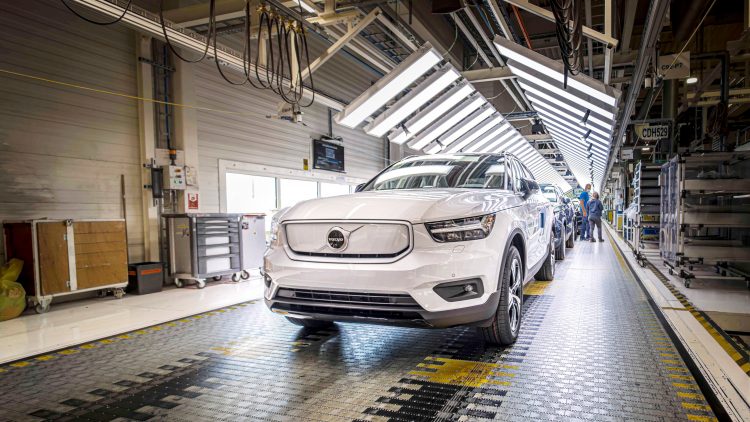 Volvo has announced that it will be tripling the electric car manufacturing capacity at its plant in Ghent in Belgium.

The goal of the company is that, by 2022, the electric car capacity at the plant will amount to around 60% of the total production. The move comes after Volvo has seen a strong growth in demand for its Recharge models. The share of Recharge cars as a percentage of total sales more than doubled in 2020 compared to 2019.

Ghent is currently preparing to take a second fully electric Volvo model, based on the CMA modular vehicle architecture, into production later this year. The plant already builds the XC40 Recharge, the company’s first fully electric car, as well as plug-in hybrid versions of the XC40.

The XC40 EV is a very interesting vehicle as we reported that it is an all-wheel drive SUV with a range of 249 miles on a single charge and an output of 408hp. The battery can charge to 80% of its capacity in approximately 40 minutes on a fast-charger system.

That is why the company is investing in tripling the electric car manufacturing capacity in Ghent, according to Javier Varela, Head of Global Industrial Operations and Quality.

“Our future is electric and customers clearly like what they see from our Recharge cars,” he said. “As we continue to electrify our line-up and boost our electric production capacity, Ghent is a real trailblazer for our global manufacturing network.”

While Ghent is the first of Volvo’s global manufacturing network to start building fully electric cars, the company also has plans to increase electric car manufacturing capacity at its other facilities around the globe. In fact, we have reported a few months ago that the company has opened a brand-new electric motor lab in Shanghai meant for the development and testing of electric car components.

Volvo is working towards becoming a fully electric brand and that is why it is making significant investments in all areas from design and development of electric motors to the manufacturing facilities.